Patronage and Power: Selections from the Asia Society Museum Collection 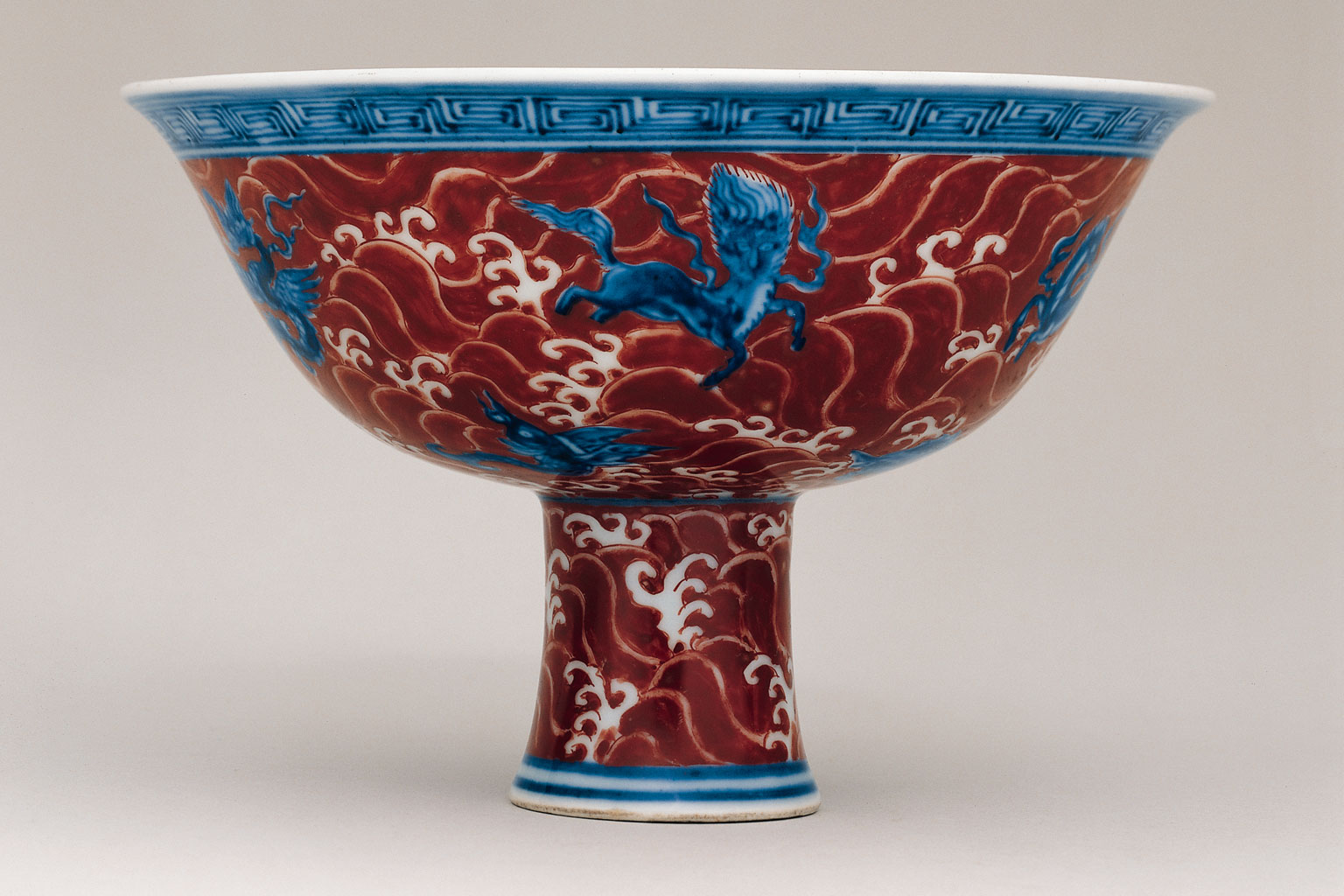 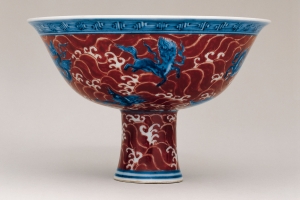 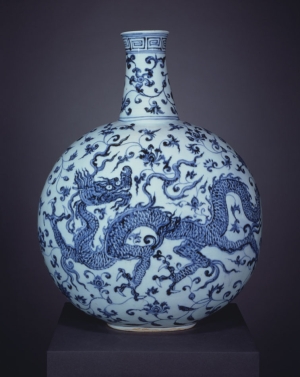 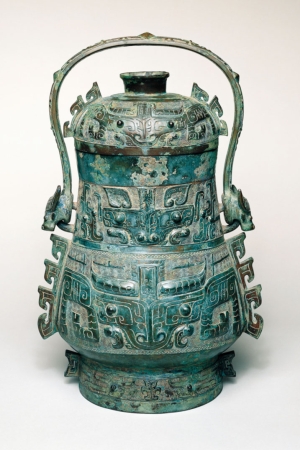 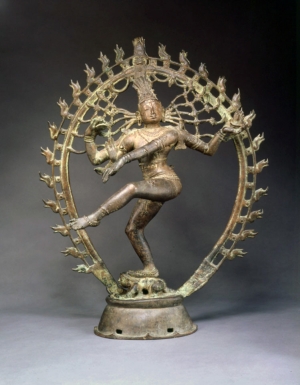 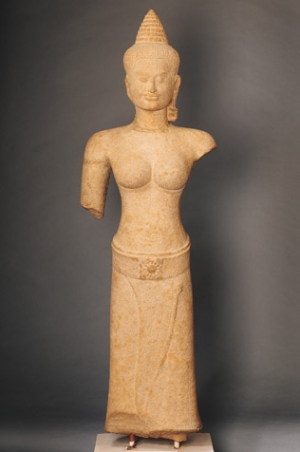 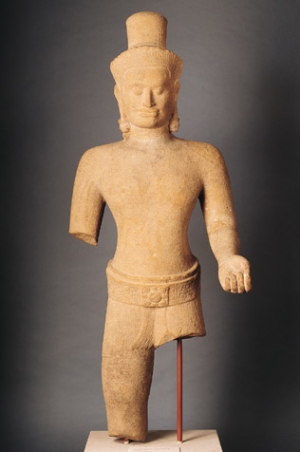 Throughout time and across cultures people from a wide range of social statuses and religious backgrounds have commissioned or donated funds so that works of beauty and religious significance could be created. Wealth and power have often made it possible for emperors, kings, and ruling classes to fund the grandest projects and commission objects created out of expensive and highly refined materials.

In Asia rulers and wealthy patrons supported the creation of Hindu and Buddhist temples as well as the production of impressive icons for them. These acts were demonstrations of their power in this life, but just as important—and perhaps more so—patrons carried them out with the expectation that they would be rewarded in the next life. In China, the sumptuous tomb sculpture created for the underground palaces of the deceased further demonstrate that artistic creations often reveal a desire by those with power to extend their influence beyond this life. Emperors also filled their palaces with objects that testified to their political legitimacy and supremacy. In the case of the Chinese Ming and Qing dynasty rulers porcelains became testaments to their extensive bureaucratic control and personal taste.

Although similar kinds of objects made of less refined materials were available to those with fewer means, the quality of craftsmanship and often the scale of these works reveal the elite status of their patrons. While most of the pieces on view are luxury items for private or court use, many of the large-scale religious works ultimately found a much wider audience composed of the faithful from a variety of classes who went to temple and monastery sites and participated in religious processions. This exhibition explores the impact of patronage—whether court or religious—on the production of select pieces from Asia Society’s renowned permanent collection.

The Pala dynasty monarchs ruled much of the eastern region of the South Asian subcontinent between the eighth and twelfth centuries. Important Buddhist centers in Bihar and Bengal, where craftsmen created the works seen below, flourished during this period. Perhaps the most influential king with regard to the pieces in this section of the exhibition was Dharmapala (r. 770–810), the great patron of Buddhism. He is said to have founded fifty religious schools for the teachings of Buddhism, and one of his greatest achievements was reviving the renowned fifth century Buddhist center of learning, Nalanda University. Ancient inscriptions indicate that monarchs collected revenue from local villages to support Nalanda, but donations also came to this great center of learning from around the world. Therefore, the campus, with its carvings, and painting, and rows of stupas and multiple monasteries (viharas), was supported by royal as well as other forms of patronage. The sculpture of the Buddha Shakyamuni includes features such as the twisted inner garland of the halo and its swirls of flames that link it to pieces from Nalanda from the late ninth to early tenth centuries. 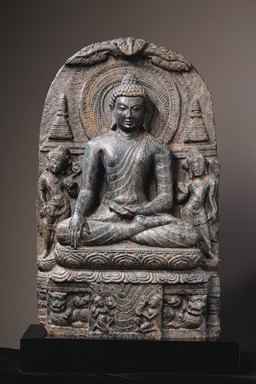 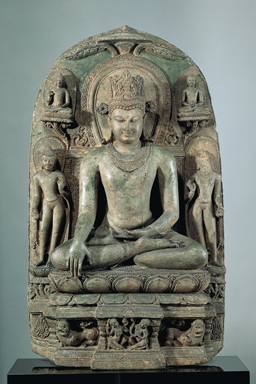 The tradition of cast-bronze sculptures in the Tamil-speaking region of south India became widely prevalent under the imperial rule of the Cholas, who rose to prominence in the late ninth century at Tanjavur (Tanjore). The Chola rulers were patrons of the arts who constructed enormous temple complexes decorated with representations of Hindu gods. Bronze icons such as those displayed below were kept in the temples for individual devotion as well as ritual and festival use. While entry into sacred spaces of the temple compound was often dependent on social status, festival processions were open and accessible to all as the deities traveled beyond the confines of the temple and circumambulated the streets among crowds of worshippers. The bronze sculpture seen here were mainly created from the ninth through the thirteenth century. They represent the pinnacle of bronze casting in India and the technical quality mastered during this period has not been equaled since. Their graceful poses and refined modeling attest to the sophisticated taste of those who commissioned them and the artistic skill of the craftsmen who created them.

Shiva as Lord of the Dance (Shiva Nataraja) 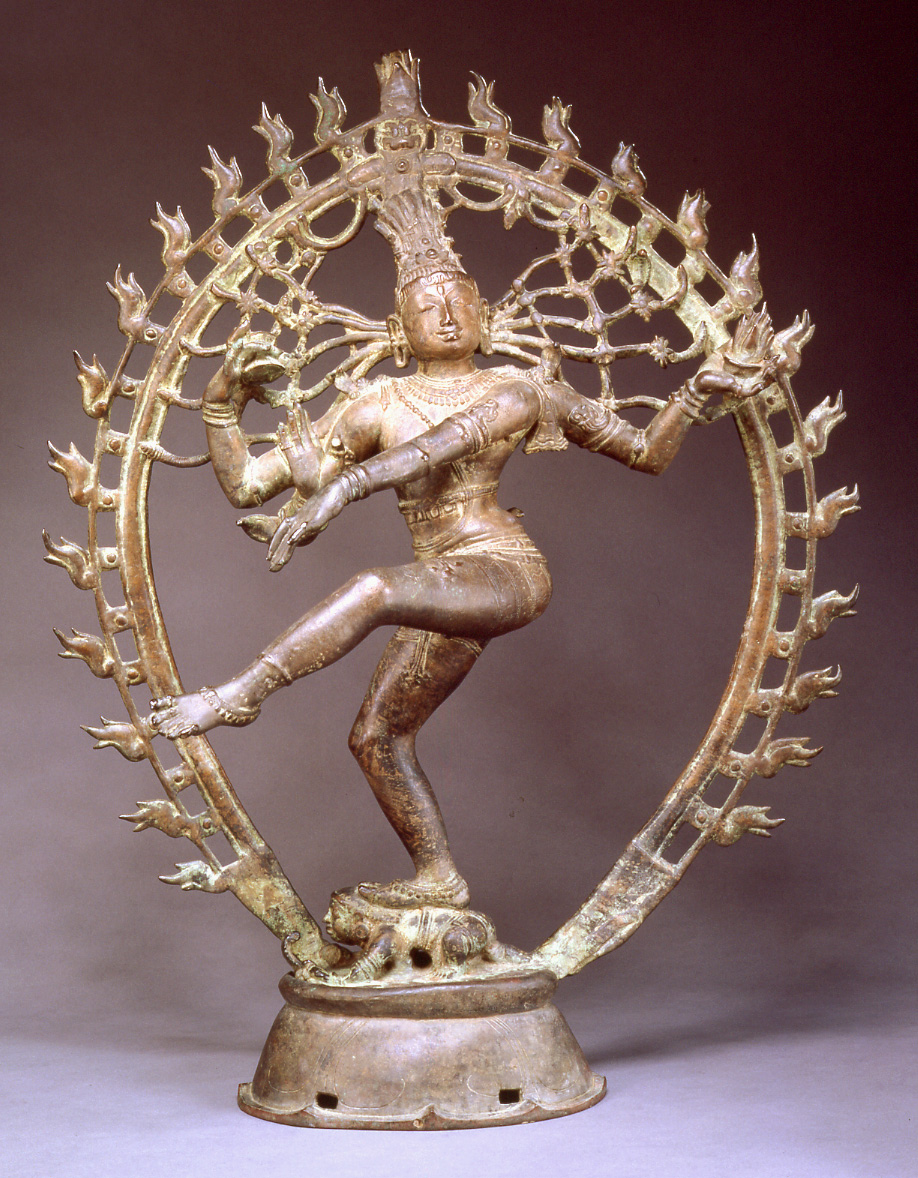 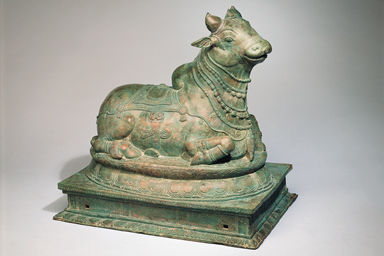 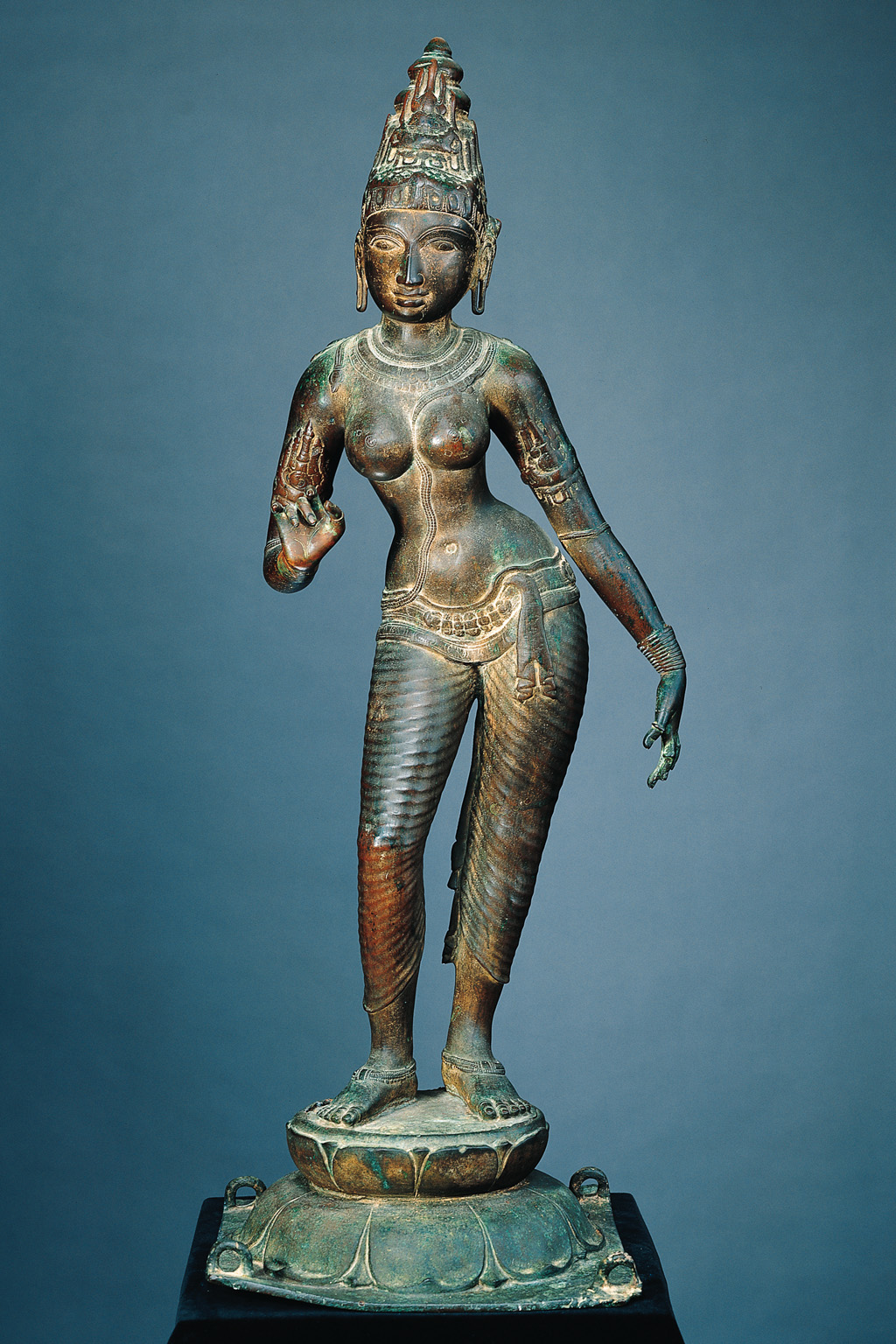 The Angkor period, spanning from about 802 to about 1431, takes its name from the Khmer capital established at the end of the ninth century. During this period the Khmer empire included large portions of mainland Southeast Asia. Angkor period rulers had huge temple mountains constructed that were filled with religious scenes in relief and three-dimensional sculptures like those seen below. These temples were dedicated to both Hindu and Buddhist religions. From the ninth century on Cambodian kings ruled as god-kings (devrajas) and sculptures of deities like the Shiva and Buddha on view below might have been regarded as images of both the deity and as a symbol of a particular ruler. The male and female figures that are missing their heads are in a style associated with the temple-mountain of the Baphuon, although the original site of the figures remains unclear. King Udayādityavarman II (r. 1050–1066), whose patron deity was the Hindu god Shiva, ordered the three-tiered Baphuon built at the center of the capital. The sculptors carved the figures in a manner that seems to transform stone into warm, taut flesh.  Similarly, the other male and female pair, both with characteristic oval-shaped faces, are in a style associated with the Bayon, the temple-mountain located at the center of the walled city of Angkor Thom. The Bayon was either dedicated to the Hindu god Brahma or the Buddhist deity Avalokitesvara and was just one of several great architectural projects royally commissioned by Jayavarman VII (r. 1181–c.1218). Without the original context for these pairs of figures it is impossible to identify who they represent, but they may be royal figures. 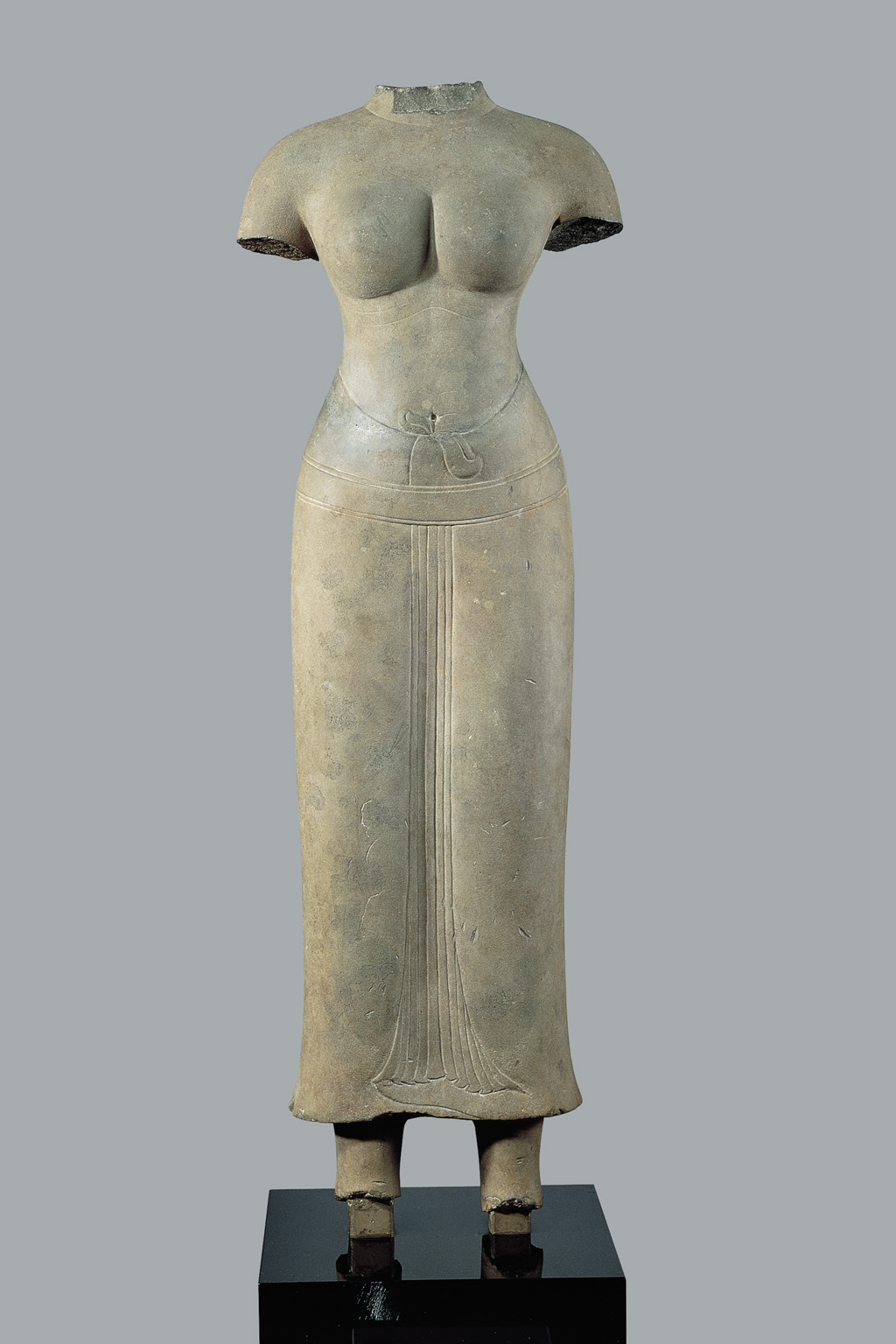 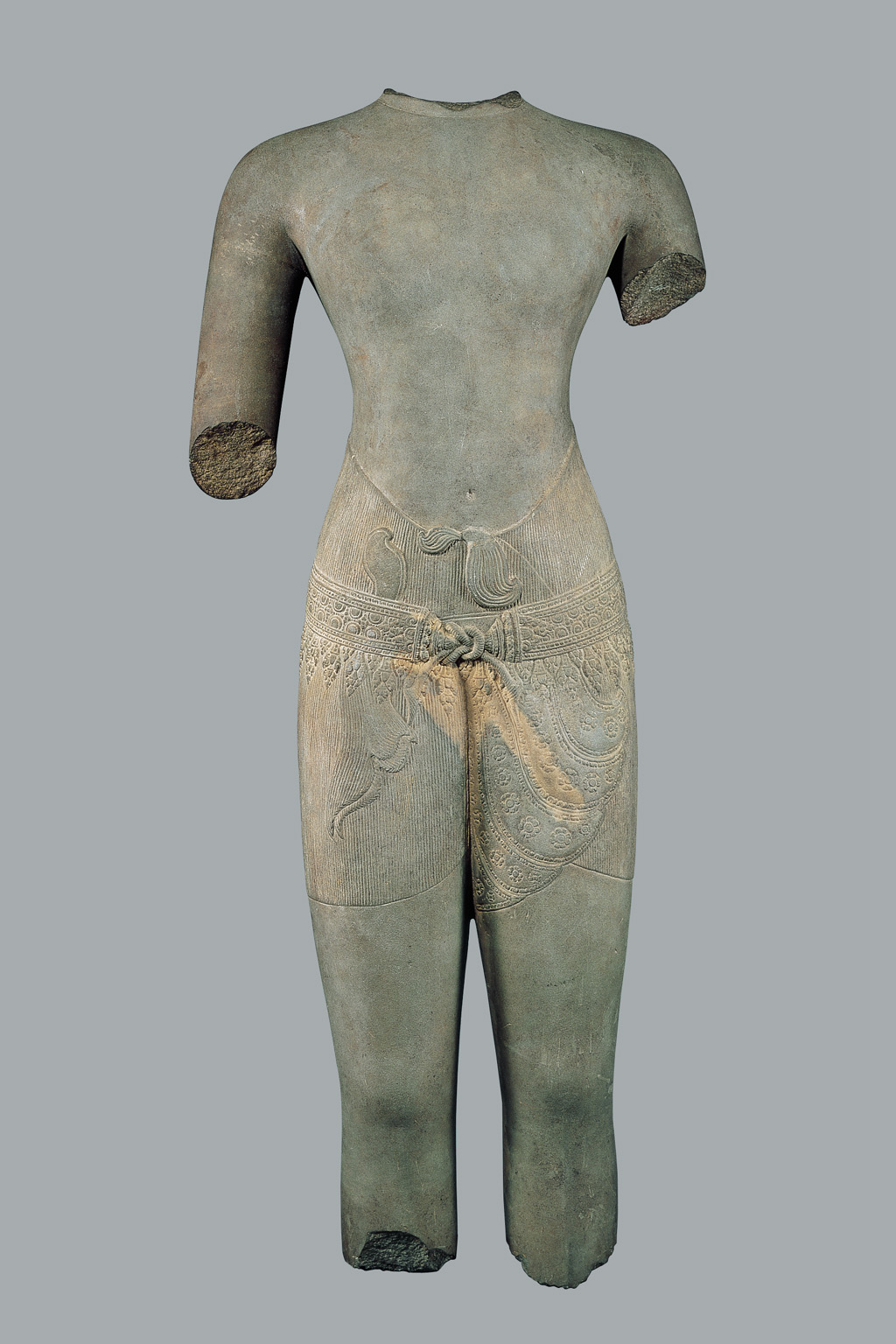 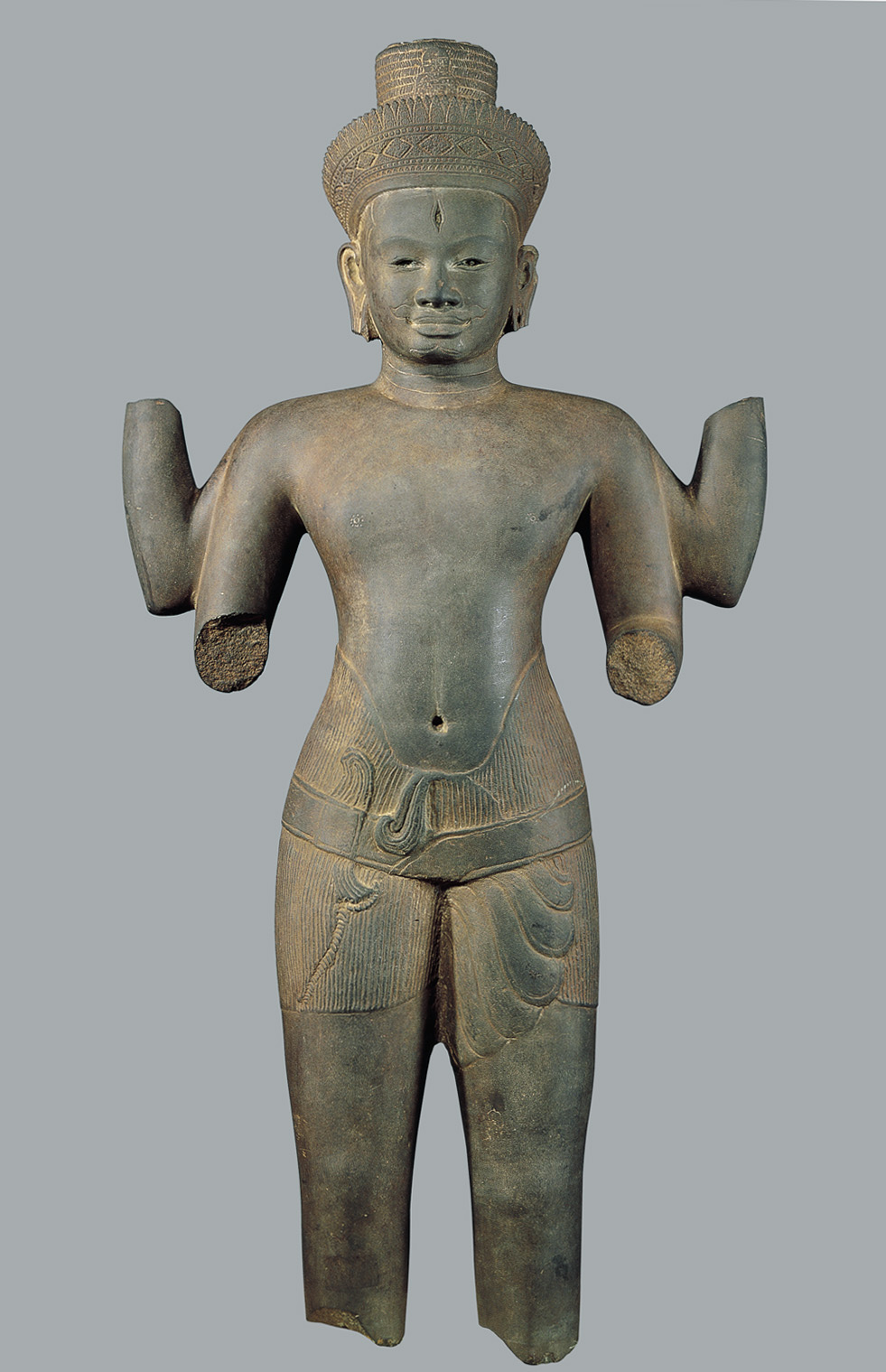 Crowned Buddha Seated in Meditation and Sheltered by Muchilinda 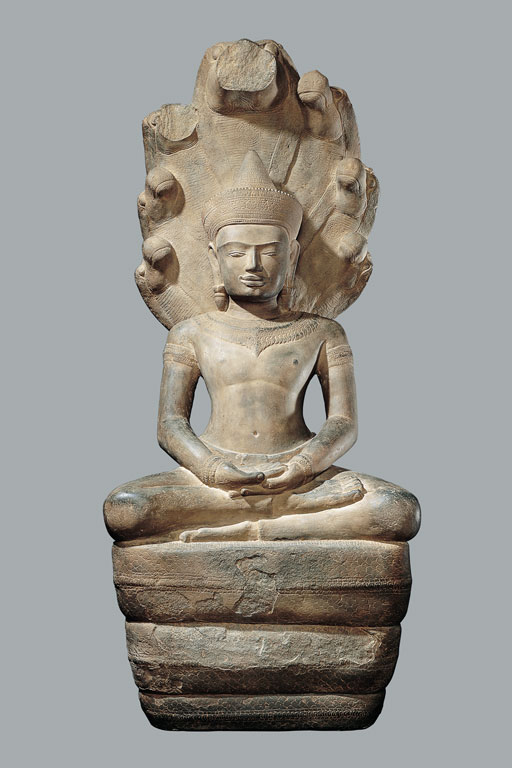 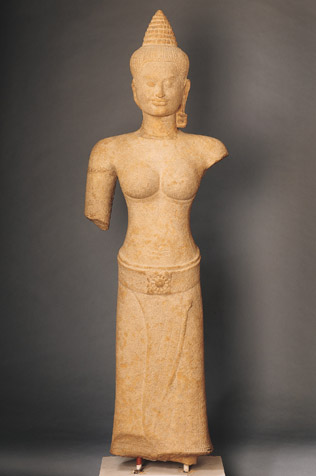 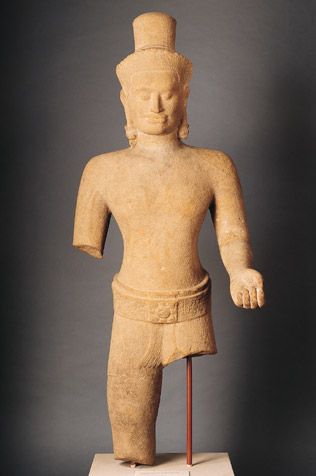 Between the fifth millennium and the eleventh century BCE Chinese vessels for ritual use developed into standard groups of shapes. With the advent of the Bronze Age in China, bronze became the material of choice for the sets of ritual vessels commissioned for the ruling elites. Under the Western Zhou kings (r. circa BCE 1050–771), new vessel shapes began to emerge suggesting that they had implemented new changes to earlier ritual systems for ancestral or state ceremonies. The covered wine vessel with one long handle called a you and the food vessel with a handle at either side called a gui were standard types of ritual vessels produced during the Western Zhou period. The elaborate, protruding decorative designs seen here also typify the period. With the move of the Zhou capital eastward from Xi’an to Luoyang ritual vessel designs became more varied, as can be seen in the fanciful design of the Eastern Zhou gui. New kinds of bronze ornamentation also emerged during this period, including the masterful use of copper and silver inlay as seen on the flask. This example demonstrates how bronze increasingly came to be used to create luxury goods for the wealthy for use in everything from state banquets to dowries. 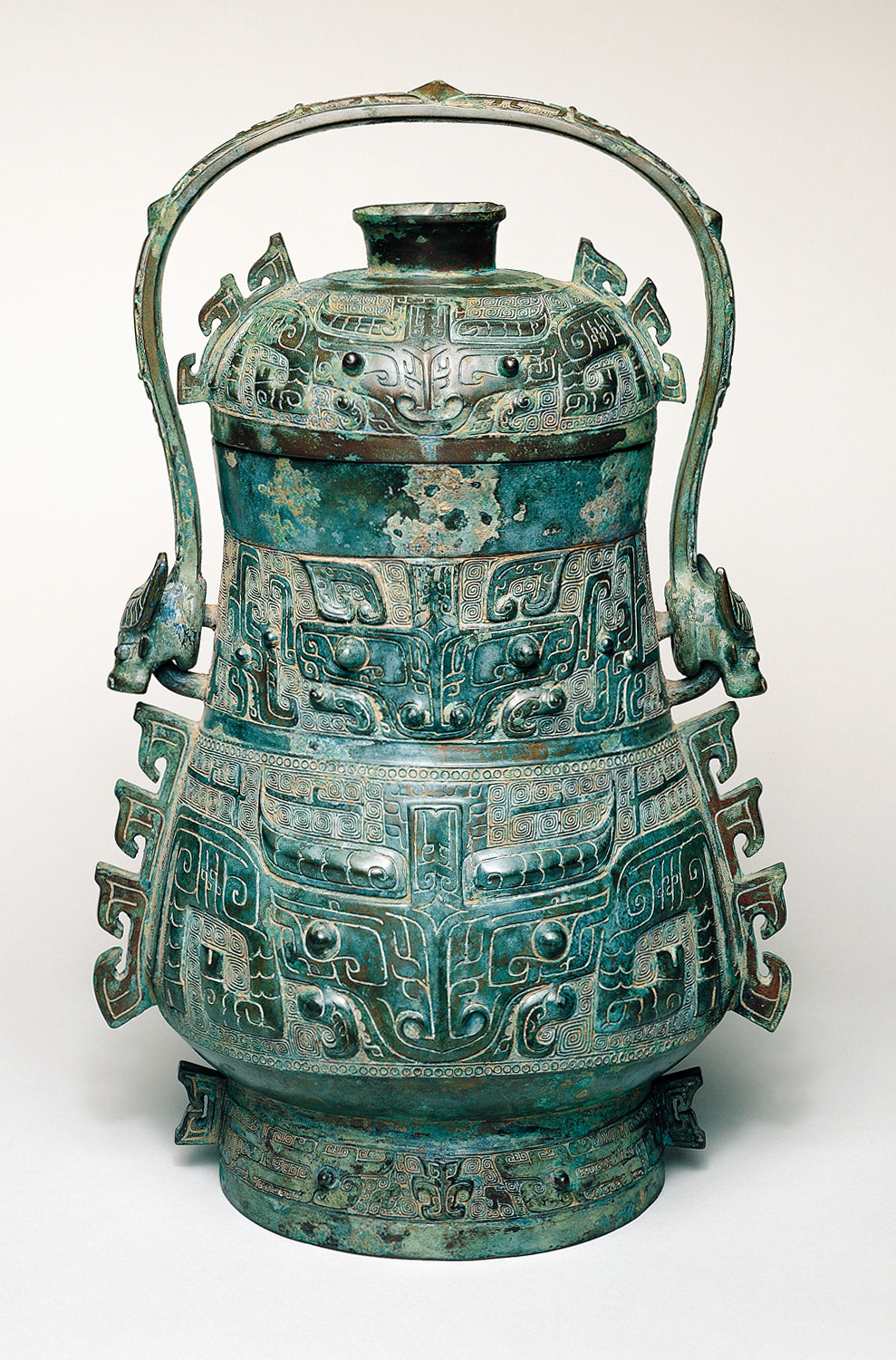 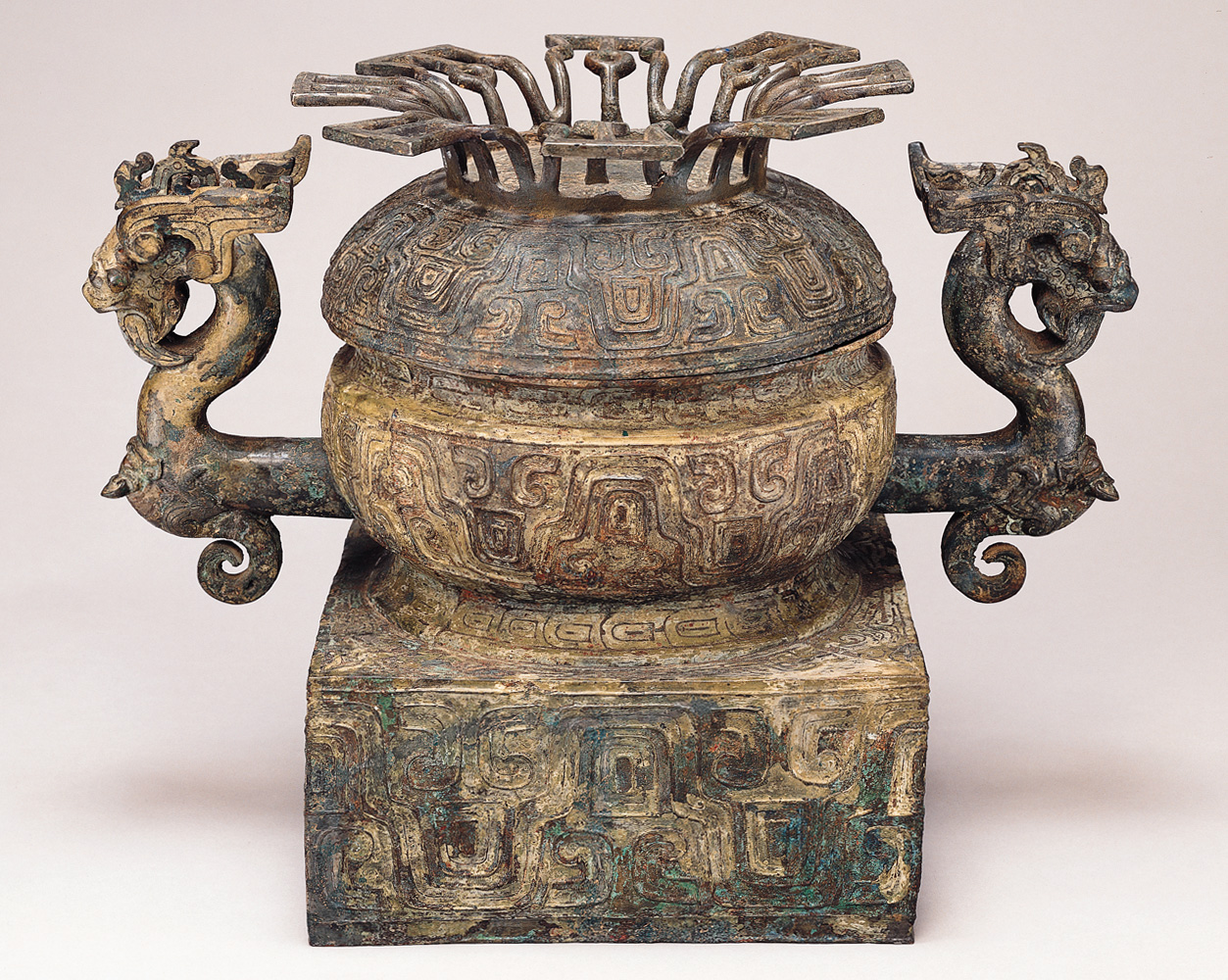 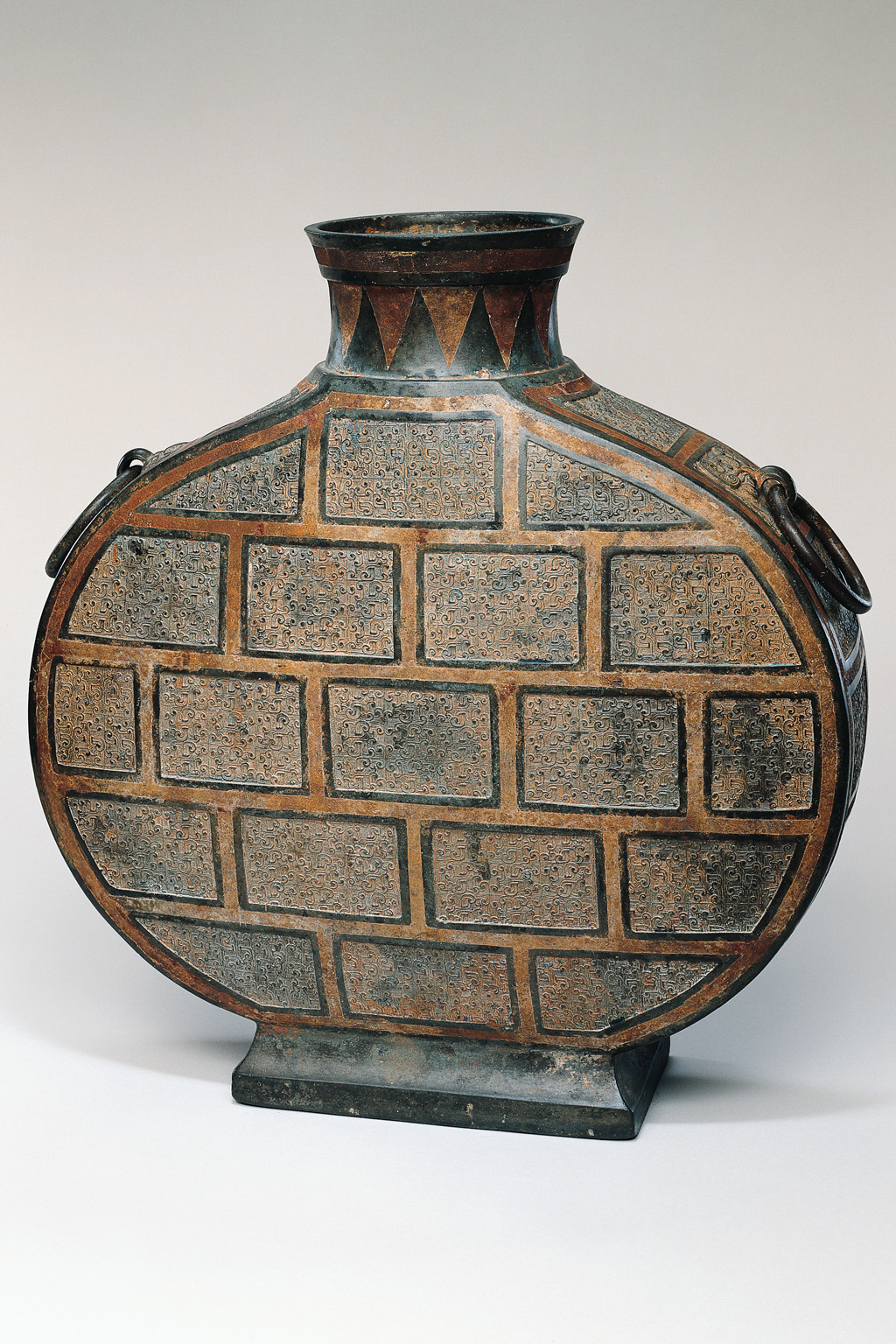 The earliest known examples of ceramics covered with sancai glazes have been excavated from royal tombs dated to the last quarter of the seventh century. Sancai, or three-color wares, are vibrant lead glazes usually in yellow, white, and green, but other colors like cobalt blue are sometime included. The vast majority of sancai appear to have been made during the late seventh to early eighth centuries for the purpose of furnishing the tombs of royals and other elite families. Tang tombs could be quite complex with long access ramps and multiple chambers. Large tomb figures like the civil official were often placed at the openings of the main chambers, while funerary figures representing servants or supporting service—like the horse and court lady—would have been placed along the tomb’s access ramp. By 742 the production of funerary figurines for furnishing the tombs of the deceased was so prolific that sumptuary laws sought to decrease both the size and number of figures permissible for the various official ranks whose families were commissioning them. By the second half of the eighth century, rebellion and warfare led to the destruction of important kilns where craftsmen made sancai and production dwindled. 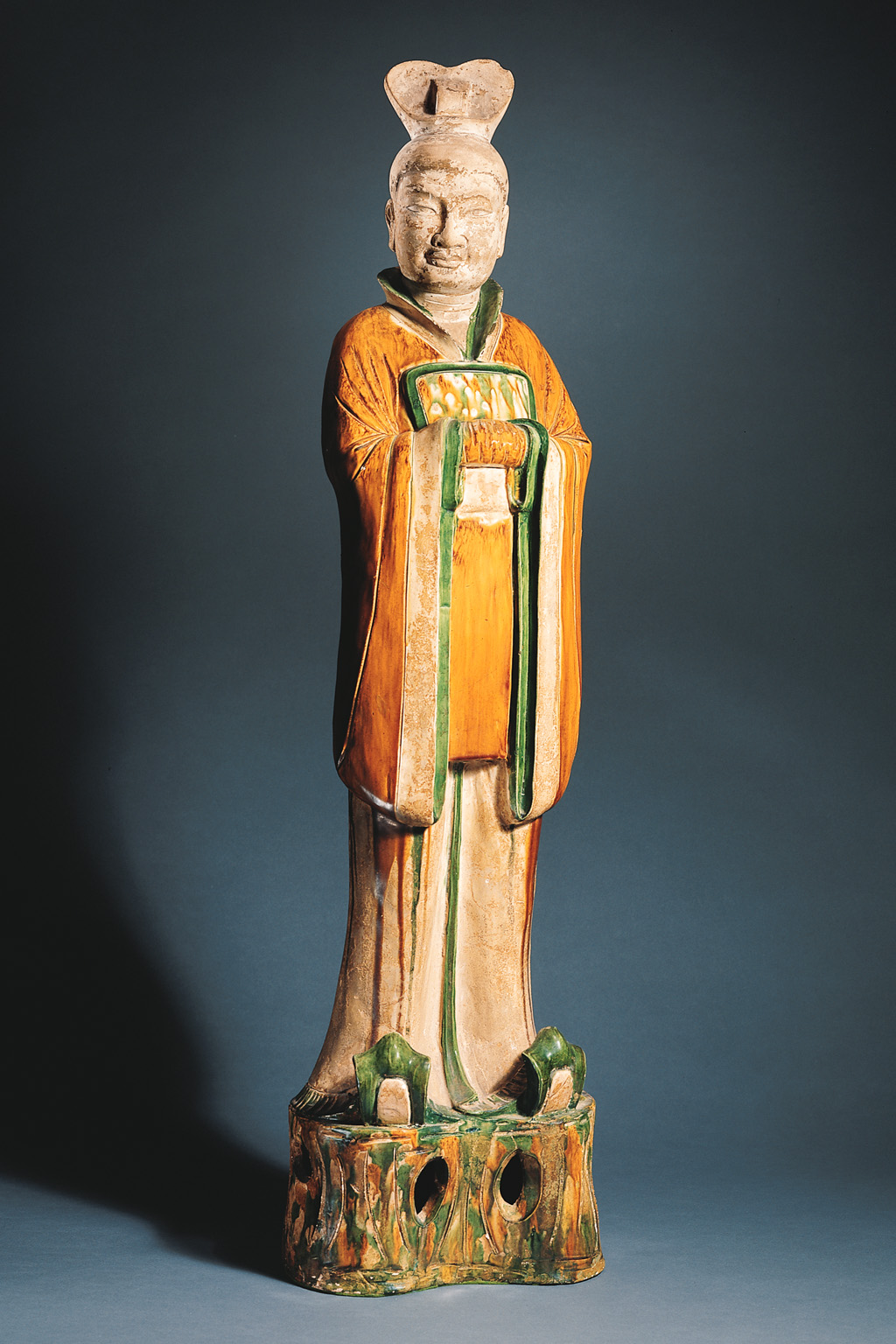 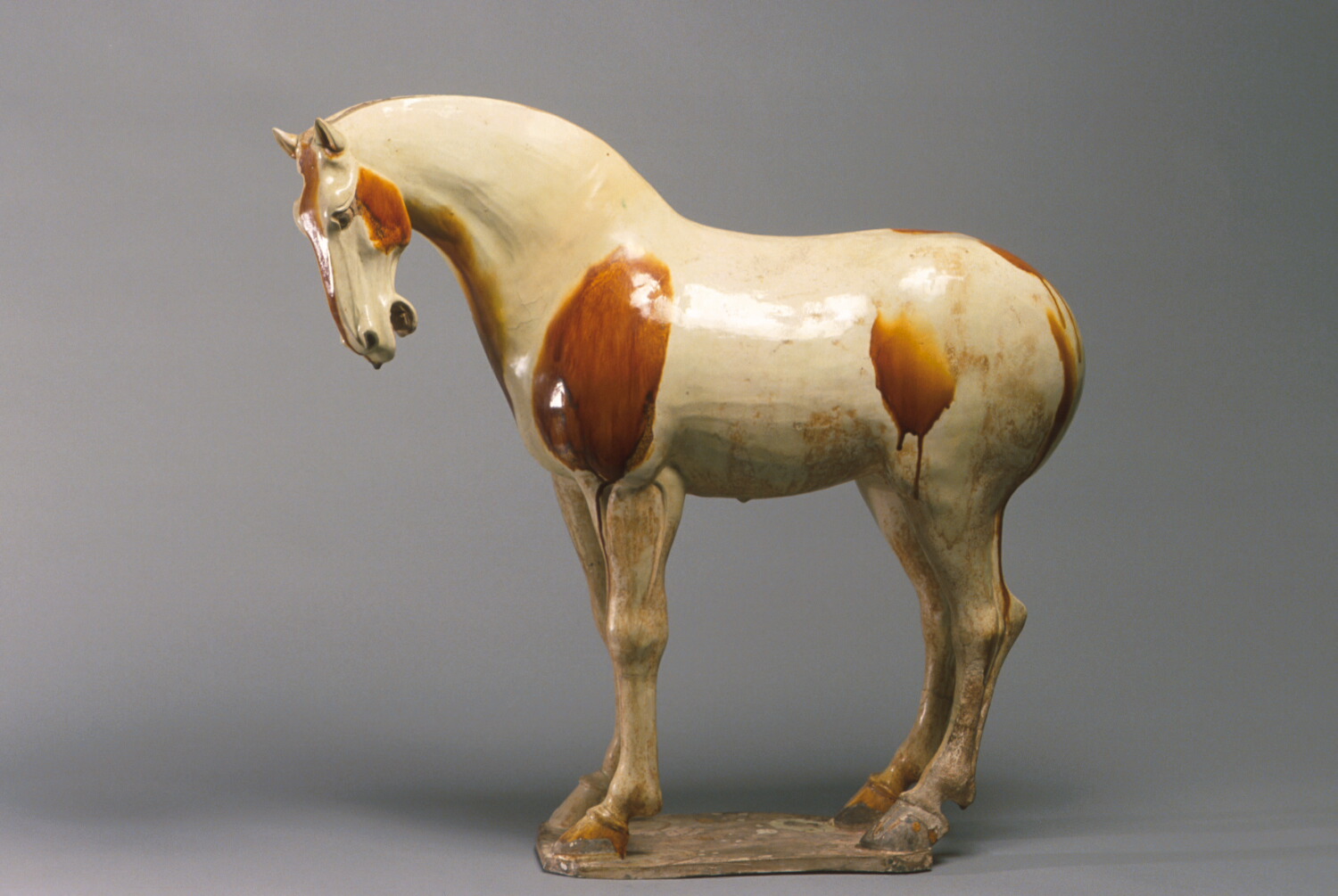 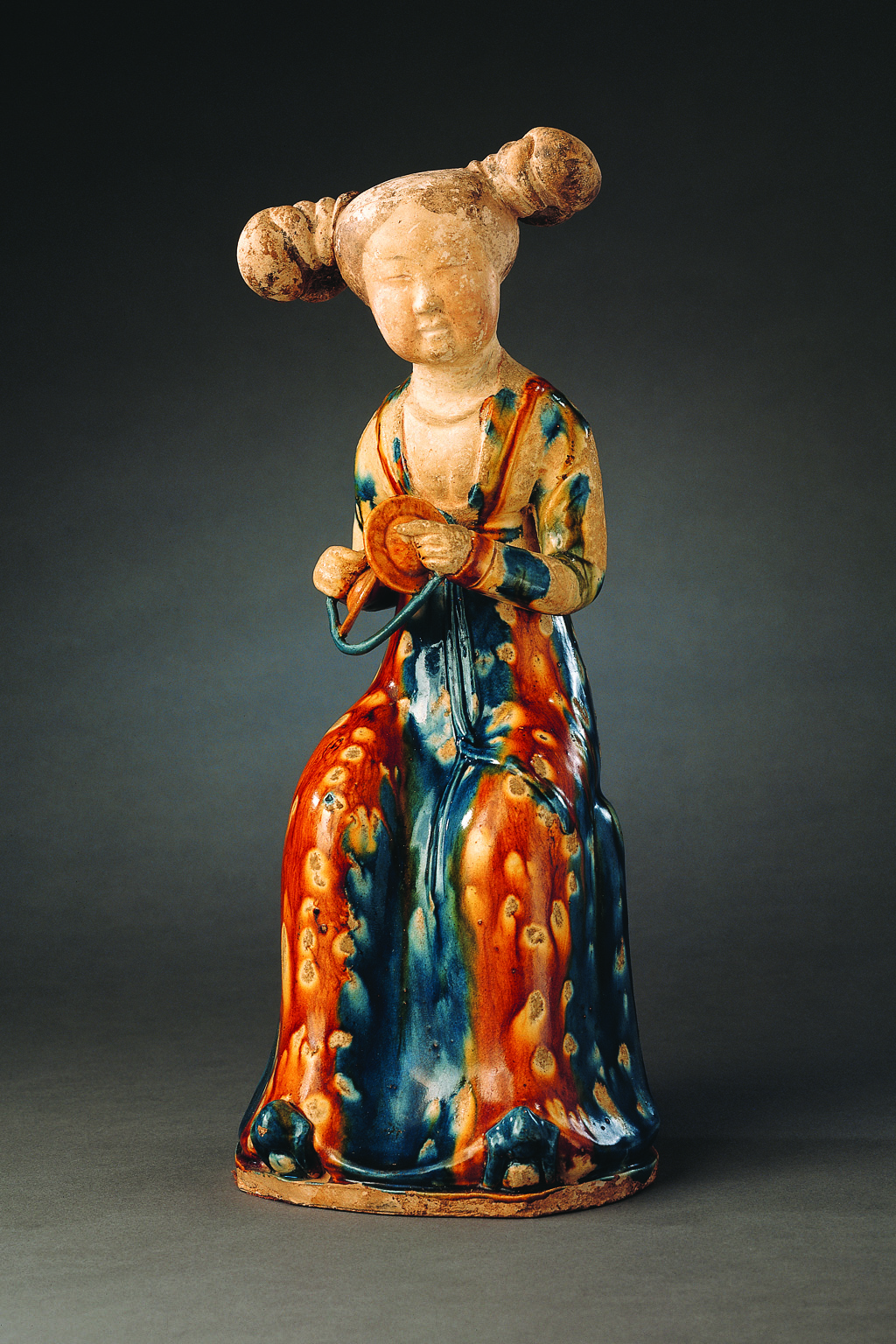 Chinese Imperial sponsorship for ceramics production has a long history in China. By the time the Ming-dynasty emperor Jianwen (r. 1399–1402) established the imperial porcelain factory at Jingdezhen in China’s Jiangxi province in 1402, Chinese emperors were finding the translucent white porcelain body and its decorative possibilities irresistible. The emperors appointed officials to supervise the porcelain production for the palace. Examples of porcelains produced under the reigns of three great imperial patrons, the Ming Yongle (r. 1403–1424) and Chenghua (r. 1465–1487) emperors and the Qing Yongzheng (r. 1723–1735) emperor can be seen below.

The so-called sweet white wares (tian bai) like the bottle here were among the most popular ceramics during the reign of the Yongle emperor, the third emperor of the Ming dynasty. He is recorded as having stated, “It is deeply satisfying to one’s spirits that the court should utilize familiar, bright, clean, and unadorned Chinese porcelain vessels.”White is the color of mourning in China, and scholars have suggested, that it is possible that the emperor chose the color as a public representation of his grieving for his deceased father, who he had defied by usurping the throne from its rightful heir.

Porcelains with elegant, thin bodies, delicate designs, and sumptuous glazes produced under the Ming Chenghua emperor show a level of perfection never before equaled. This emperor came to the throne as a child and was strongly influenced by others from an early age. His concubine, Wan Guifei, almost two decades older than he and a lover of luxury stimulated the high level of craftsmanship exhibited by the imperial porcelains from this period.

Imperial interest in inventive new ceramics reached its apogee during the Qing dynasty. An unprecedented flowering of decorative developments included the production of an extraordinary range of new colors and patterns. Among the emperors distinguished for encouraging innovations in porcelain decoration was the Yongzheng emperor, who ordered strict guidelines for quality and kept designers and craftsmen, including Jesuit missionaries from Europe, employed in the service of the court to produce works to suit imperial tastes. As seen here, he was particularly fond of porcelains with finely painted enamels. 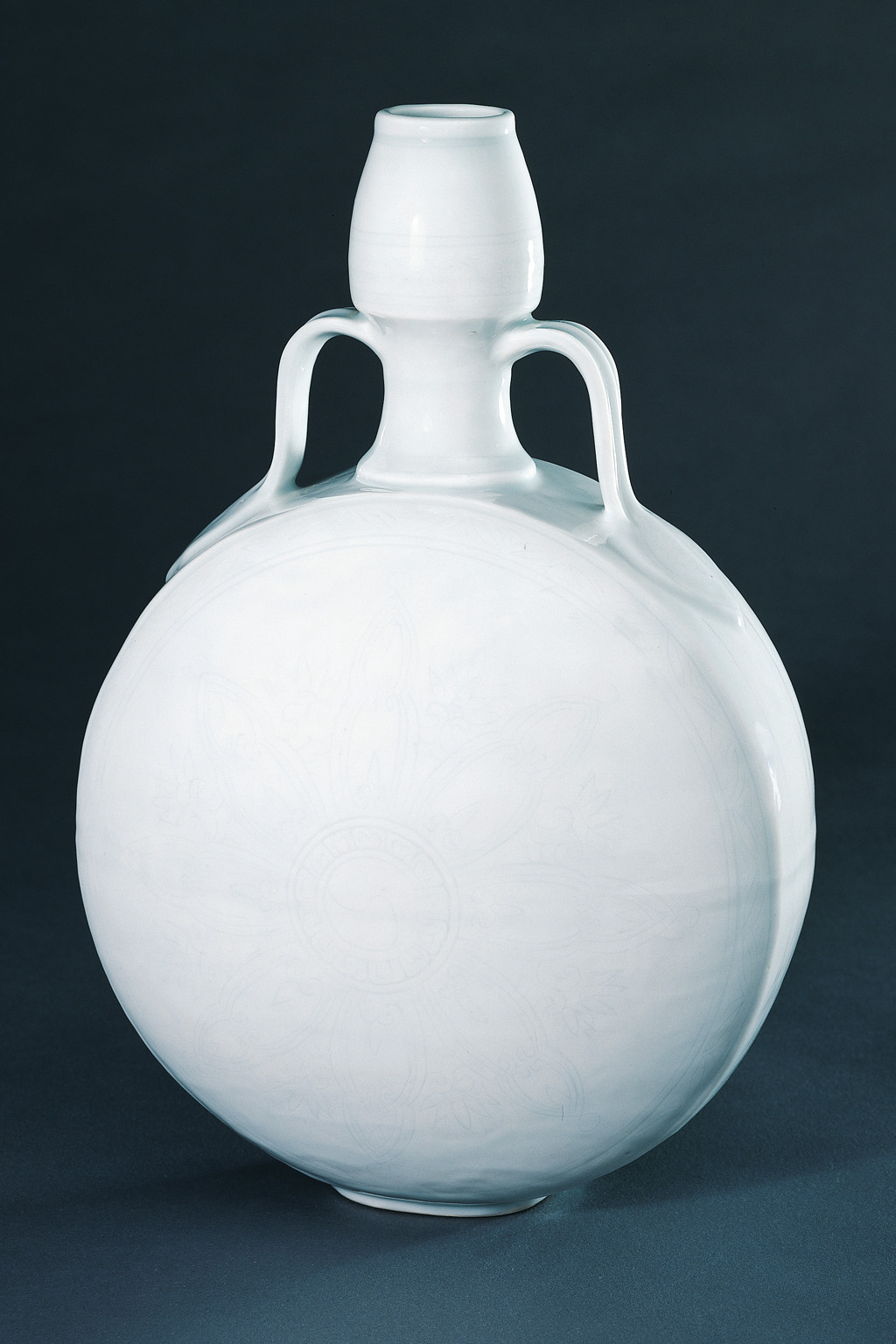 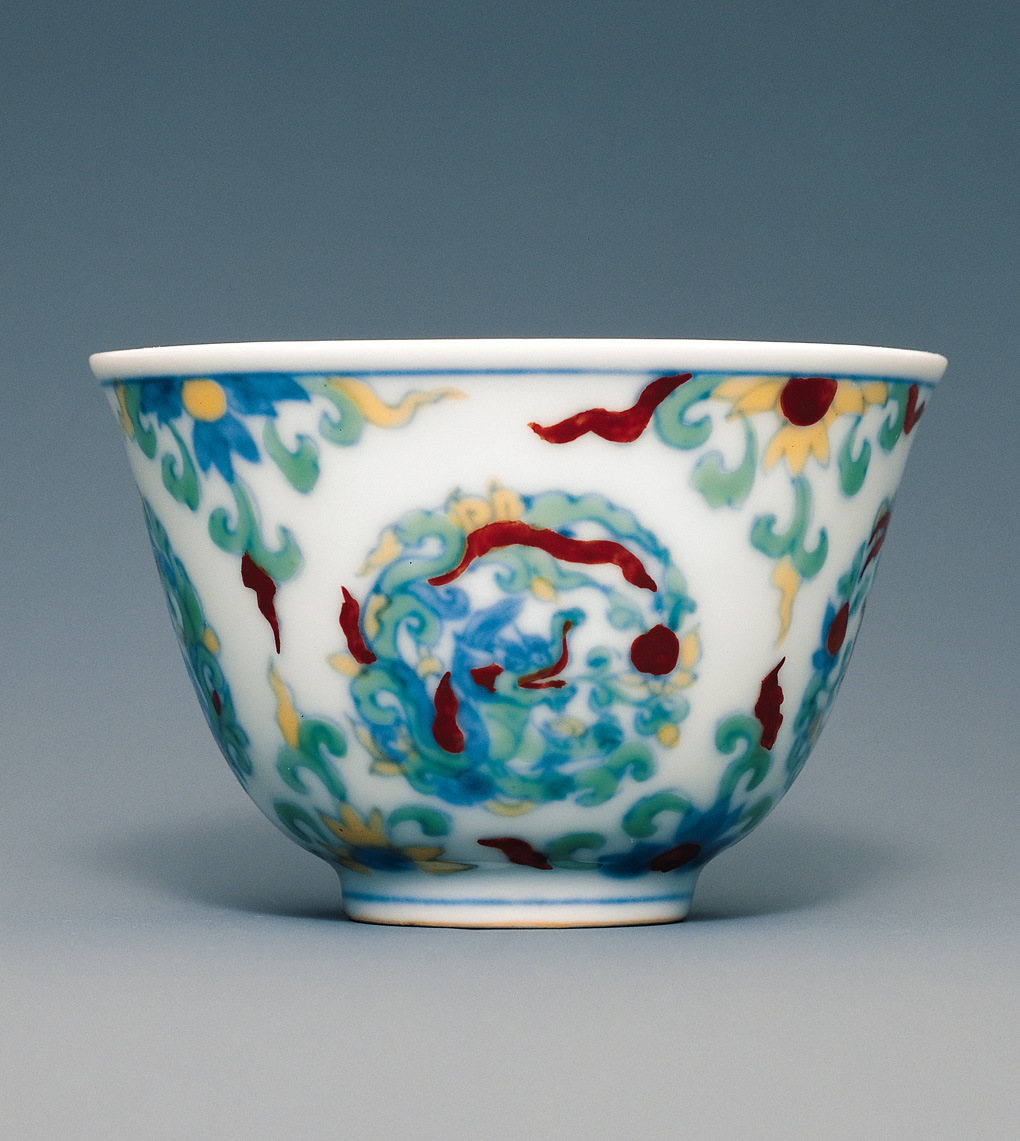 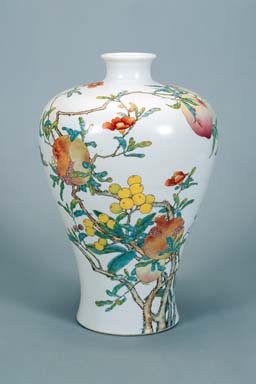