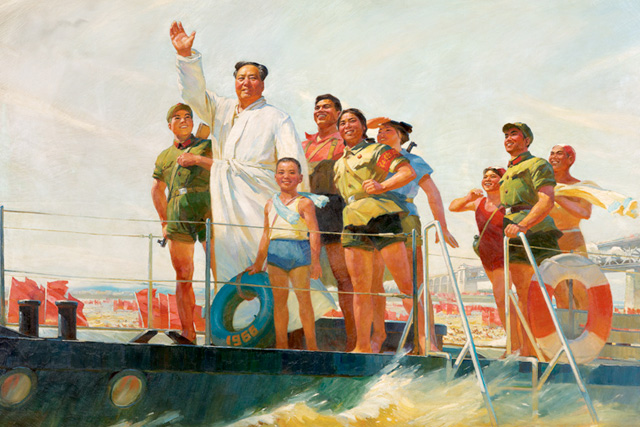 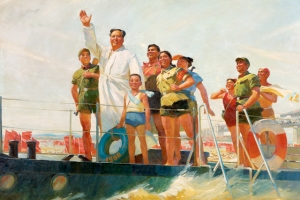 Art and China’s Revolution reflects upon one of the most tumultuous and catastrophic periods in recent Chinese history⎯ the three decades following the establishment of the Peoples Republic of China in 1949. During this time, the government led by Mao Zedong sought to modernize China across all aspects of society, a process that included suppressing or destroying much of traditional culture. The government also sought to create a new visual culture to communicate its goals and ideology to the Chinese people.

Artists were encouraged to create art that reflected ther evolutionary spirit of the time, in Mao’s words, to create art for the people. The impact of this directive on artists and art making was enormous. Oil painting in a socialist realist style replaced ink painting which had been one of the most revered art forms in China for over one thousand years—as the preferred painting style. Revolutionary heroes, such as workers, soldiers, and peasants replaced traditional subjects such as landscapes, birds, and flowers.

While this shift toward new mediums and subjects began in the 1950s, it was adopted with greater rigor during the Cultural Revolution, which lasted from 1966 to 1976. During this ten-year period—sometimes referred to as the decade of catastrophe—senior artists, especially ink painters, were subjected to public humiliation and sometimes torture, and their homes and artworks were seized and destroyed. This type of harassment was not confined to the art world, but occurred across the entire nation. Conservative estimates of the number of people who died from persecution during the Cultura lRevolution are in the tens of thousands, while some recent studies have claimed the death toll to be as high as three million.

There is not one narrative of this complex period, but many different ones, as individual experiences varied greatly. Few members of the older generation, which included teachers and respected artists, escaped persecution and denunciations. Many of their works were included in “black painting” exhibitions as examples of works that did not reflect the political ideology of the government and therefore were not to be emulated by others. In contrast, younger artists reveled in new-found voice and opportunity. They aspired to have their paintings become model works that would be widely disseminated and reproduced hundreds of millions of times in posters and newspapers.

Until now, little effort has been made to take account of this period, during which art and politics were so closely intertwined. Artworks and materials produced during the Cultural Revolution arerarely exhibited in China and few original artworks from the period survive. This exhibition marks a first attempt, which we hope will bethe start of many, to examine these artistic developments within a historical framework that prompts a discussion of their impact on Chinese culture today.

Visit the exhibition website for Art and China's Revolution.

Shop AsiaStore for the exhibition catalogue and booklet.