[WEBCAST] Japan Versus COVID-19: A Conversation With H.E. Kono Taro, Minister of Defense 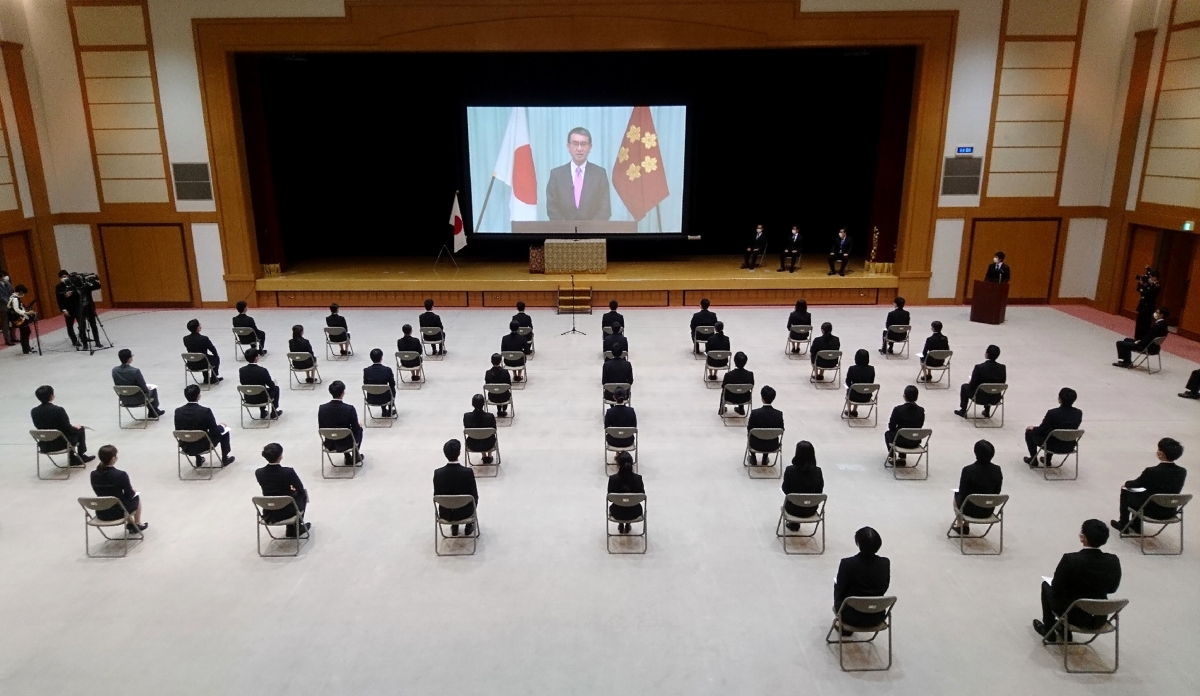 New employees of Japan's Defense Ministry sit on chairs spaced apart for social distancing due to COVID-19, as they watch a video message of Defense Minister Taro Kono during a ceremony in Tokyo (STR/JIJI PRESS/AFP /Getty Images).

Since the start of the COVID-19 global pandemic, Japanese Defense Minister H.E. Kono Taro has played a major role in coordinating the government’s response to the crisis. Japan’s Self Defense Forces (SDF), first mobilized in response to the Diamond Princess cruise ship outbreak, continue to provide medical assistance and oversee the transport and quarantine of individuals arriving from abroad. Despite a recent uptick in new cases, Japan has reported a relatively low rate of fatalities, arguably due in part to the rapid deployment of the SDF.

In a wide-ranging conversation with Asia Society’s Daniel Russel and Takako Hikotani of Columbia University’s Weatherhead East Asian Institute, Minister Kono will share lessons learned from Japan’s experience with coronavirus and offer his insight into what role Japan can play in the global response, as well as the broader security implications of the pandemic on the region.

Dr. Takako Hikotani is Gerald L. Curtis Associate Professor of Modern Japanese Politics and Foreign Policy. She previously taught at the National Defense Academy of Japan, where she was Associate Professor, and lectured at the Japan's Ground Self Defense Force and Air Self Defense Force Staff Colleges, and the National Institute for Defense Studies. Her research focus is on civil-military relations and Japanese domestic politics, Japanese foreign policy, and comparative civil-military relations. Her publications (in English) include, “The Japanese Diet and Defense Policy-Making,” International Affairs; “Trump’s Gift to Japan: Time for Tokyo to Invest in the Liberal Order,” Foreign Affairs; and “Japan’s New Executive Leadership: How Electoral Rules Make Japanese Security Policy" with Margarita Estevez-Abe and Toshio Nagahisa, in Frances Rosenbluth and Masaru Kohno eds., Japan in the World (2009). She was a Visiting Professional Specialist at Princeton University, a Social Science Research Council/Abe Fellow (2010-2011), and is a U.S.-Japan Leadership Program Fellow at the U.S.-Japan Foundation (2000- ).

Daniel Russel is Vice President for International Security and Diplomacy at the Asia Society Policy Institute (ASPI). Previously he served as a Diplomat in Residence and Senior Fellow with ASPI for a one year term. A career member of the Senior Foreign Service at the U.S. Department of State, he most recently served as the Assistant Secretary of State for East Asian and Pacific Affairs. Prior to his appointment as Assistant Secretary, Mr. Russel served at the White House as Special Assistant to the President and National Security Council (NSC) Senior Director for Asian Affairs. During his tenure there, he helped formulate President Obama’s strategic rebalance to the Asia Pacific region. Prior to joining the NSC in January of 2009, he served as Director of the Office of Japanese Affairs and had assignments as U.S. Consul General in Osaka-Kobe, Japan (2005-2008).

This program is made possible in partnership with Columbia University’s Weatherhead East Asian Institute, and in coordination with the Asia Society Policy Institute.

This is a web-only event. Tune in on Thursday, May 21 at 8 a.m. New York time for a free live webcast on our YouTube channel and Facebook page.