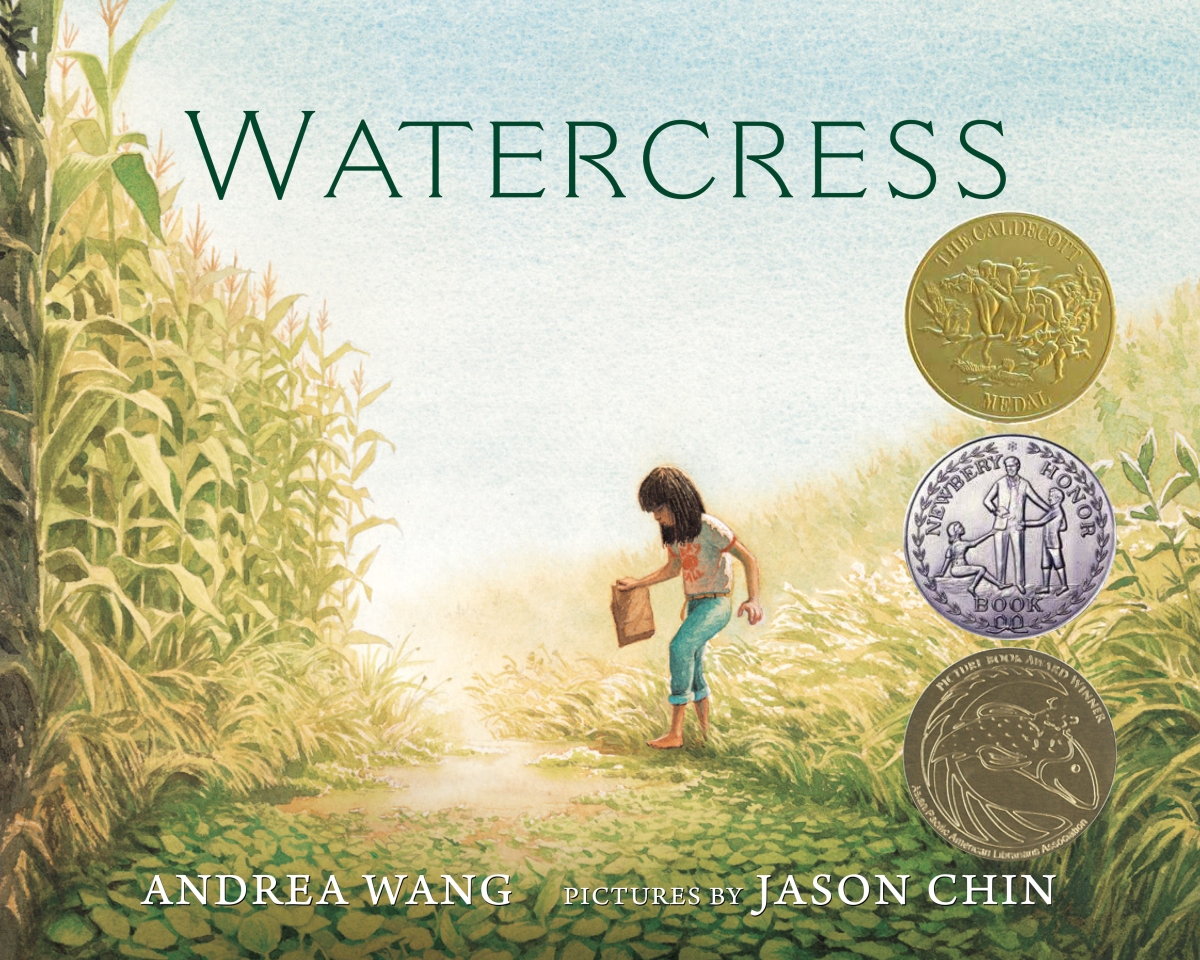 Throughout May, the Center for Global Education at Asia Society, in partnership with Holiday House Publishing presents Stories of Heritage: Asian American Voices in Children's Literature an #ownvoices reading series that spotlights the work of Asian American children’s book authors.

Gathering watercress by the side of the road brings a girl closer to her family's Chinese Heritage. Driving through Ohio in an old Pontiac, a young girl's parents stop suddenly when they spot watercress growing wild in a ditch by the side of the road. Grabbing an old paper bag and some rusty scissors, the whole family wades into the muck to collect as much of the muddy, snail-covered watercress as they can. At first, she's embarrassed. Why can't her family get food from the grocery store? But when her mother shares a story of her family's time in China, the girl learns to appreciate the fresh food they foraged. Together, they make a new memory of watercress. Andrea Wang tells a moving autobiographical story of a child of immigrants discovering and connecting with her heritage, illustrated by award-winning author and artist Jason Chin, working in an entirely new style, inspired by Chinese painting techniques.

Other readings in this series include:

Sunday Funday in Koreatown, written and illustrated by Aram Kim

My Tree, written by Hope Lim and illustrated by Il Sung Na

Purchase your copy of all of the books we will feature in this series at Yu and Me Books!

Andrea Wang is an acclaimed author of children’s books. Her book Watercress was awarded the Caldecott Medal, a Newbery Honor, the Asian/Pacific American Award for Literature, a New England Book Award, and a Boston Globe-Horn Book Honor. Her other books, The Many Meanings of Meilan, Magic Ramen, and The Nian Monster, have also received awards and starred reviews. Her work explores culture, creative thinking, and identity. She is also the author of seven nonfiction titles for the library and school market. Andrea holds an M.S. in Environmental Science and an M.F.A. in Creative Writing for Young People. She lives in Colorado with her family.

Caldecott Medalist Jason Chin is a celebrated author and illustrator of many children’s books, including: Your Place in the Universe, Miranda Paul’s Nine Months: Before a Baby is Born, and Andrea Wang’s Watercress, for which he received the 2022 Caldecott Medal. Watercress also received a 2022 Newbery Honor Award as well as the 2022 APALA Award. His book Grand Canyon was awarded a Caldecott Honor, a Sibert Honor, and the NCTE Orbis Pictus Award. His other acclaimed nonfiction titles—Redwoods, Coral Reefs, Island: A Story of the Galápagos, and Gravity—have received numerous starred reviews and other accolades. Jason lives in Vermont with his wife and children.

Holiday House publishes timeless books for young readers. We strive to carry on the legacy of a prestigious and award-winning catalog of books by fostering meaningful relationships with our creators. We publish enlightening, educational, and entertaining books while promoting a culture of excellence, independence, growth, and adaptability. We are committed to maintaining the trust we have established with our community of booksellers, educators, librarians, parents, and caregivers through years of producing quality books.