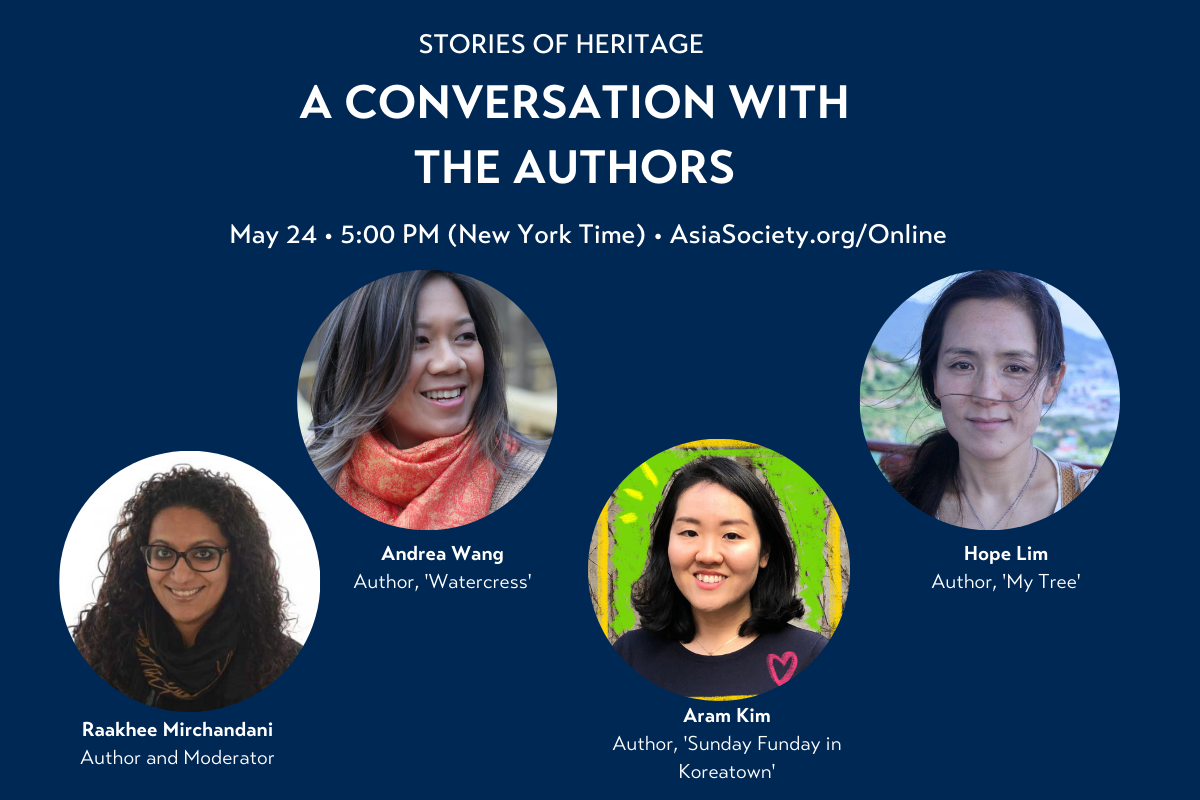 Tune in May 24, at 5:00 p.m. New York time for a free live video webcast. #AsiaSocietyLIVE

Throughout May, the Center for Global Education at Asia Society, in partnership with Holiday House Publishing, presents Stories of Heritage: Asian American Voices in Children's Literature, an #ownvoices reading series that spotlights the work of Asian American children’s book authors.

Children's books help develop empathy when children read about and identify with characters dissimilar to themselves. Furthermore, it is equally important for children to see themselves in the books they read. Despite overwhelming research that reading diverse books are vital for fostering confidence and empathy in children, Asian American stories are still underpublished and underrepresented.

This event will explore the importance of highlighting Asian American voices in children's literature by engaging a panel of best-selling authors and advocates for diversity in children's books. Join Aram Kim, Hope Lim, Andrea Wang, and Raakhee Mirchandani (moderator) for an in-depth and thought-provoking conversation.

Purchase your copy of all of the books featured in this series at Yu and Me Books!

Raakhee Mirchandani (moderator) is a journalist, children’s book author, activist and mom. Previously a feature writer and columnist for the New York Post, a managing editor at the New York Daily News and associate editor at the Boston Herald, Raakhee’s work has also appeared in Elle, Glamour, the Wall Street Journal, Redbook and HuffPo, and she was the editor-in-chief of Moneyish, published by Dow Jones. The New Jersey-born daughter of immigrants, Raakhee is a proud supporter of many nonprofits, serving on the boards of the Tomorrows Children's Fund, the Hoboken Public Library, Stevens Cooperative School and the Children’s Book Council. In 2020, Raakhee launched her podcast, “Brown Mom,” where she chats with friends and notables about being brown in America.  She lives in Hoboken, N.J., with her husband and daughter, the inspirations for Hair Twins and Super Satya Saves the Day.

Aram Kim is a New York-based children's book author/illustrator and a picture book designer. She was born in Ohio, spent her childhood in South Korea, and now lives in Queens, NY. She is an advocate for diversity in children's literature, and the creator of the Multicultural Children's Book Day poster for 2018. No Kimchi For Me!, about family, food, intergenerational connections, has universal themes, and at the same time celebrates Korean culture. It was a Junior Library Guild Gold Standard selection, Bank Street’s Best Children’s Books of the Year 2018, and 2018 A Baker’s Dozen: The Best Children’s Books for Family Literacy by The Pennsylvania Center for the Book. Its sequel Let’s Go to Taekwondo! (Bank Street’s Best Children’s Books of the Year 2021) came out in April 2020 and the following book in the Yoomi, Friends and Family series, Sunday Funday in Koreatown came out in March 2021. Both are also selected as Junior Library Guild Gold Standard selection.

Hope Lim is a children's book author from South Korea and now lives in San Francisco with her family. Hope has always loved language. She majored in English Literature and earned a Master's degree in Conference Interpretation. For many years, she navigated the world of diplomats, working as an interpreter for the US State Department. Then motherhood ushered her into the world of children's literature, where she discovered the power of picture books, which transcends time, place, and language. Now, Lim continues her love of language by reading with her two children and writing stories, often inspired by them. Hope's latest book is titled, My Tree.

Andrea Wang is an acclaimed author of children’s books. Her book Watercress was awarded the Caldecott Medal, a Newbery Honor, the Asian/Pacific American Award for Literature, a New England Book Award, and a Boston Globe-Horn Book Honor. Her other books, The Many Meanings of Meilan, Magic Ramen, and The Nian Monster, have also received awards and starred reviews. Her work explores culture, creative thinking, and identity. She is also the author of seven nonfiction titles for the library and school market. Andrea holds an M.S. in Environmental Science and an M.F.A. in Creative Writing for Young People. She lives in Colorado with her family.