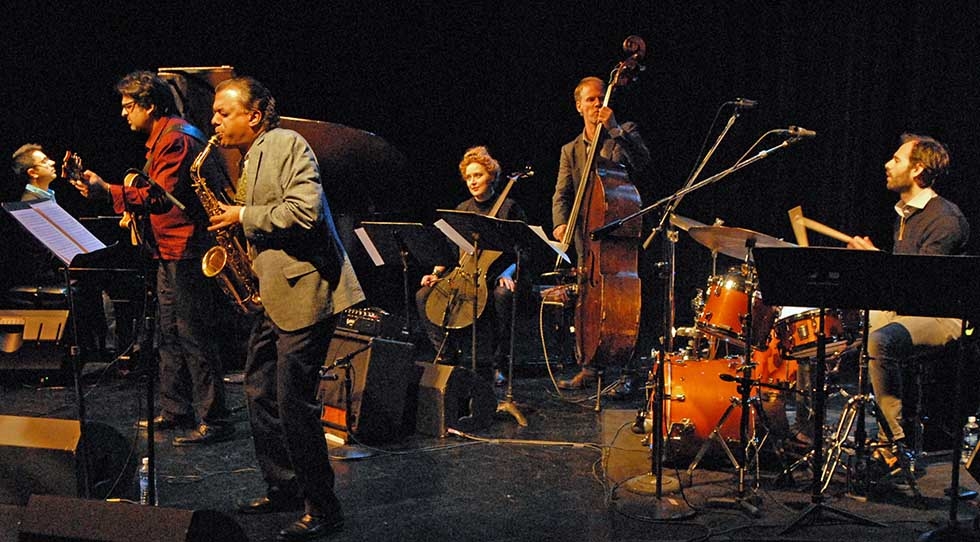 This performance will also take place on Friday, December 16.

“neither Eastern nor Western, but effortlessly global … proof that jazz can be as vital and boundary-pushing as ever.” —All About Jazz

Invocation is Pakistani-born American jazz guitarist Rez Abbasi’s sextet featuring pianist Vijay Iyer and saxophonist Rudresh Mahanthappa. In this performance, the group unveils a new project that explores Carnatic classical music from Southern India through the idiom of jazz. This is the final installment in a triptych made by Abbasi that puts a jazz lens on the musical traditions of South Asia; Invocation previously explored Hindustani music and qawwali in a pair of critically acclaimed recordings.

Abbasi — along with Iyer and Mahanthappa — is one of a trio of jazz musicians who are forging distinctly South Asian-inflected voices on the contemporary scene. Abbasi comes to this endeavor honestly: he is one of the foremost guitar players in modern jazz, a graduate of the Manhattan School of Music, but early in his career he made a pilgrimage to India to study with tabla master Ustad Alla Rakha, father of Zakir Hussain. The mission of Invocation’s music, Abbasi declares, is “to create a global-based music steeped in jazz. This tradition follows in the footsteps of some of the greatest jazz musicians. Coltrane, Ellington, and Gillespie all immersed themselves in music from around the world.”

With Johannes Weidenmueller on bass; Dan Weiss on drums; and Elizabeth Means on cello.

This performance of Rez Abbasi's Invocation, presented in collaboration with Duke Performances and Walker Art Center, is supported by the Presenter Consortium for Jazz, a program of Chamber Music America funded through the generosity of the Doris Duke Charitable Foundation.

Listen: The Sounds of Rez Abbasi