Featuring work by three dynamic artists who are expanding the possibilities of dance. 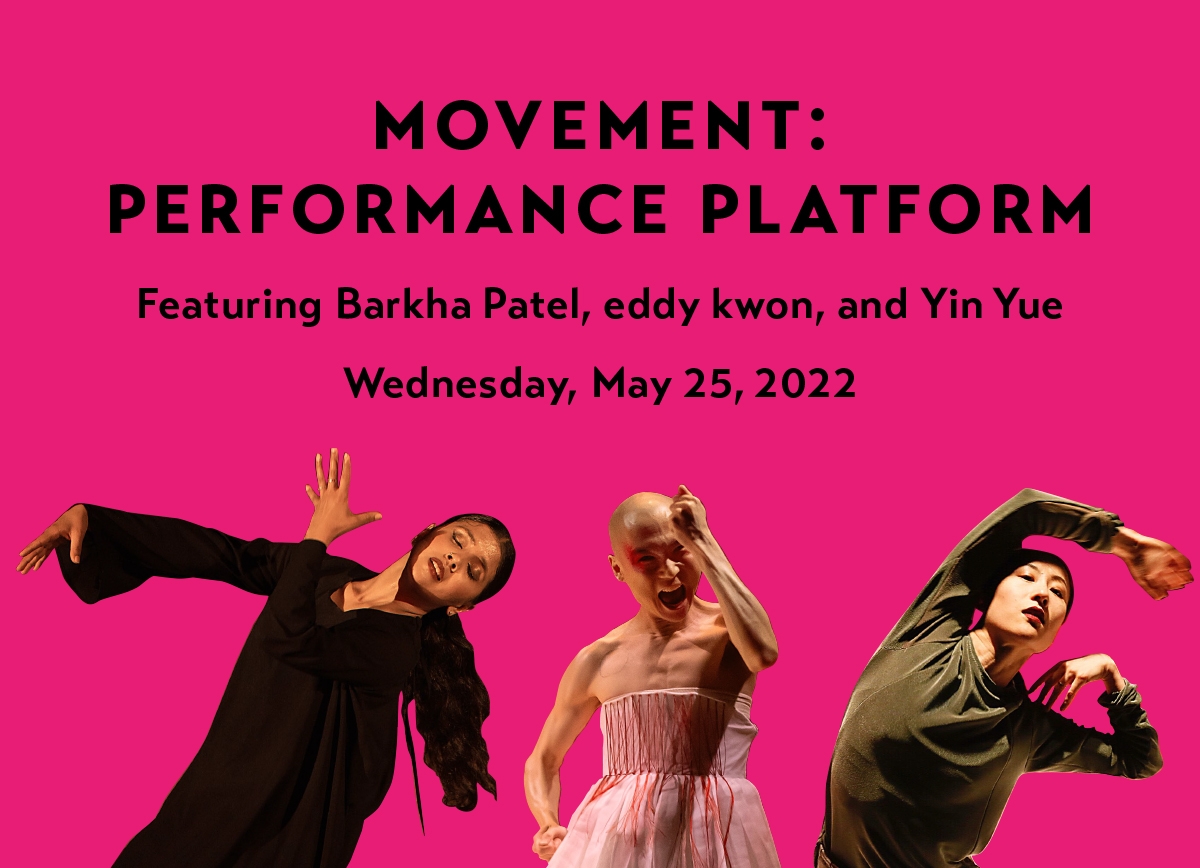 PLEASE NOTE: Tickets are sold out. Sign up to join the ticket waitlist. The performance will also be livestreamed. To experience online, tune in to Asia Society's Facebook or YouTube page on May 25 at 7:30 p.m. ET. No registration is required to join the livestream.

Tune in on Wednesday, May 25 at 7:30 p.m. New York time for a free live webcast of the performance.

The in-person performance is sold out. Sign up to join the waitlist for an in-person ticket:

In the wake of heightened anti-Asian sentiment and amid escalating global polarization and violence, what might the embodied experience of dance offer? How are choreographers shaping new directions forward through somatic knowing and exploring—ways of understanding and investigating through one’s body, its wisdom, and its archive of memories? What might we dance toward?

eddy kwon’s interdisciplinary solo “UMMA-YA” (Korean for MAMA-YA) draws from the spiritual matter of Korean folk, traditional, and shamanic performance traditions to tell the story of a young boy who learns that he will be a mother. With choreography inspired by Japanese Butoh and Korean shamanic ritual, “UMMA-YA” incorporates storytelling that blends autobiography with mythology, exploring transformation and transgression, queer ritual and trans ancestry, and the impact of colonialism and imperialism on spirituality.

Barkha Patel’s emotive solo “bound” is inspired by the poetry of Lal Ded, a fourteenth-century Kashmiri poetess. Featuring Patel’s imaginative expansions of the Indian classical dance form Kathak, the work expresses a desire for spiritual clarity and transcendence when confronting the five limitations of anger, attachment, desire, greed, and illusion.

Yin Yue showcases her signature movement language called FoCo Technique™, which draws from contemporary dance as well as Chinese classical and folk dance, in the premiere of “Ember,” commissioned by Asia Society Museum, New York. The piece is built through an artistic process of developing encounters and mergers among four dancers, including Yue, exploring how people relate to one another and the possibilities that interdependence offers in a diverse society.

Experience the performance in person at Asia Society Museum, New York, or online via the live stream on May 25 at 7:30 p.m. ET.

As part of its plan for coming together again safely, Asia Society requires masks and proof of full Covid-19 vaccination for all visitors and staff.

About Performing Arts at Asia Society
Asia Society’s Performing Arts Program is an intrinsic component of Asia Society’s commitment to sharing vital aspects of Asian culture by placing creative expression at the center of a more comprehensive understanding of culture. Whether it is experimental artists exploring new territory or traditional artists bringing to life the voices of a great legacy, the Performing Arts Program has created a powerful platform for connecting and engaging with Asian culture within a deeper cultural context. We have presented extraordinary artists from renowned names such as Shen Wei, David Henry Hwang, Jen Shyu, Vijay Iyer, Sardono and Malavika Sarukkai, to the latest emerging voices. Beginning in 1957, with New York’s first performance by Indian maestro Ravi Shankar, the Performing Arts Program has since presented over a thousand performances, including original commissioned work from Asian and Asian-American artists, as well as American artists influences by Asia, such as Phillip Glass and Meredith Monk. From Indonesian hip-hop to Shanghainese electronica to Asian American experimental dance side by side with deeply moving traditional forms such as Indian Kuttiyatam, Burmese Zat Pwe or Chinese Kunqu opera. Asia Soiciety fosters artistic exchange and provides creative opportunities for artists across genres and geographies. For more information, please visit AsiaSociety.org

Major support for performances at Asia Society is provided by the Doris Duke Charitable
Foundation, Helen and Will Little, the Fan Fox and Leslie R. Samuels Foundation, Inc and the New York State Council on the Arts.

eddy kwon is an interdisciplinary artist based in Lenapehoking (northeastern United States). Her practice comprises composition, performance, improvisation, dance, and ritual to explore transformation and transgression, ceremony as living structure, and the use of mythology to connect, obscure, and reveal. She draws inspiration from Korean folk timbres and inflections, textures and movement from natural environments, and American experimentalism as shaped by the Association for the Advancement of Creative Musicians. Her work as a choreographer and movement artist embodies an expressive release and reclamation of the spiritual imprints of colonialism, channeling Japanese Butoh and honoring the lineage of queer/trans practitioners of Korean shamanic ritual. She is a Johnson Fellow at Americans for the Arts, Mellon Artist-in-Residence at the Colorado Springs Fine Arts Center, Roulette Van Lier Fellow, and United States Artists Ford Fellow. She has collaborated with artists of diverse disciplines such as the Art Ensemble of Chicago, Degenerate Art Ensemble, Du Yun, Tomeka Reid, and Senga Nengudi.

Barkha Patel is a Kathak dancer, choreographer, educator, and the artistic director of Barkha Dance Company, based in New York City. A touring artist, Patel has performed solo and ensemble works at dance festivals in India and the United States. She has presented work at the Dance Theatre of Harlem, Jacob’s Pillow “Inside/Out,” Joyce Theater, Little Island Dance Festival, New Jersey Performing Arts Center (NJPAC), and South Orange Performing Arts Center. Patel has also performed at Jamsetji Tata Theatre and Lakme Fashion Week in India.  She is the recipient of fellowships and grants from Dance/USA Institute for Leadership Training, Forge NYC, National Arts Club, NJPAC, and the New Jersey State Council on the Arts. She recently joined the advisory council at the Jamaica Center for Arts and Learning. She teaches Kathak to young and adult students in New York City and across the country in person and via Zoom.

The founder and artistic director of YY Dance Company (YYDC), Yin Yue is an internationally recognized performer and choreographer. The mission of YYDC is to incorporate Yue’s FoCo Technique™ in performances, choreographic commissions, and educational endeavors. The company has performed across the United States and internationally. Yue is the recipient of the prestigious Harkness Promise Award in recognition of her innovations in choreography and education. She has received commissions and awards from Hubbard Street Dance Chicago (International Commissioning Project), BalletX (Choreographic Fellowship), and Northwest Dance Project (Pretty Creatives International Choreographic Competition). In addition, Yue has created commissioned work for Alberta Ballet, Boston Ballet, Gibney Company, Limón Dance Company, Martha Graham Dance Company, and Philadelphia Ballet.

Nat Wilson grew up in Michigan studying dance with Ballet Chelsea. He danced with the Joffrey Ballet as an apprentice and Visceral Dance Chicago as a company member before moving to Israel to join Kibbutz Contemporary Dance Company in 2016. While with KCDC, he performed and taught workshops around the world, including in South Korea, Colombia, and India. They now split their time between New York and Los Angeles as a freelance dancer.

Grace Whitworth attended Point Park University in Pittsburgh, PA, where she earned a BA in Ballet and Jazz studies, and received the Nicole Marie Falbo Memorial Scholarship. After graduating, Grace moved to Chicago, IL and danced on scholarship at Lou Conte Dance Studio, (home of Hubbard Street Dance Chicago). Grace moved to New York City in 2011 and began dancing for YYDC, LaneCoArts, and ABARUKAS. She is happy to celebrate 10 years with YYDC.