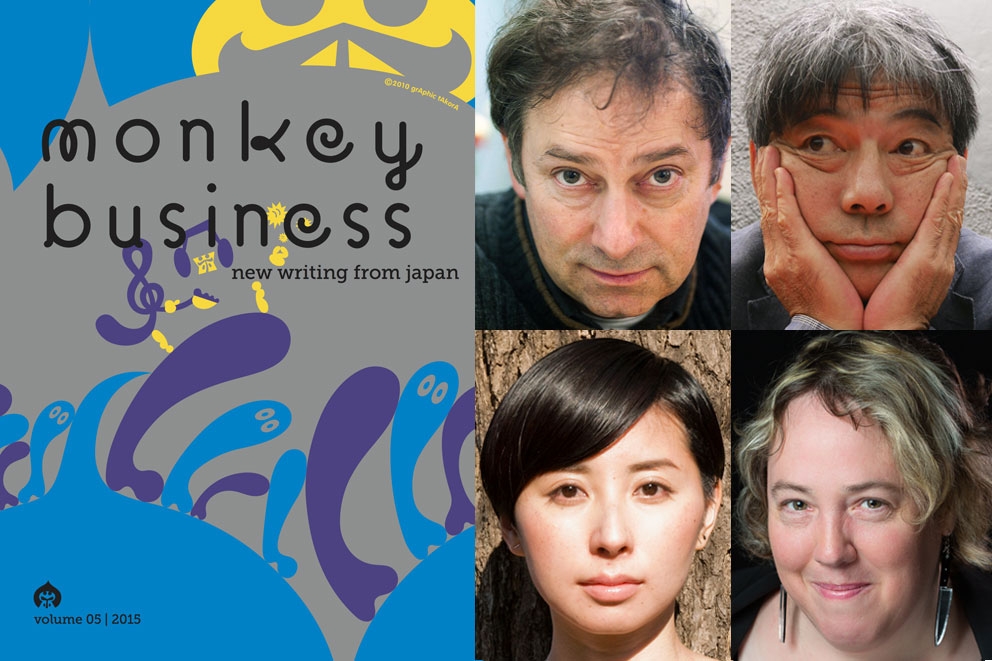 Join our annual conversation between contemporary Japanese and American authors in which Asia Society hosts an international dialogue, curated and moderated by the co-founders and editors of the Tokyo-based literary journal Monkey Business with writers who are featured in this latest edition of Monkey Business (#5).

This year rising star Japanese novelist and translator Aoko Matsuda, whose stories in the wake of Japan's 2011 earthquake and tsunami have been published in English, most notably in Granta, will be paired with American short story fabulist Kelly Link and award-winning Japanese graphic novelist and cartoonist Satoshi Kitamura will be in dialogue with award-winning American cartoonist and author Ben Katchor. Moderated by Monkey Business editor Roland Kelts and the editors and co-founders of Monkey Business, Ted Goossen and Motoyuki Shibata.

Ben Katchor is a highly esteemed cartoonist whose books include Julius Knipl, Real Estate Photographer: The Beauty Supply District (translated into Japanese), The Cardboard Valise and Hard-Drying in America. His picture stories appear in Metropolis. The latest issue of Monkey Business contains two episodes from his Shoehorn Technique. He is an Associate Professor at Parsons The New School for Design in New York City.

Satoshi Kitamura is an award-winning picture-book artist and illustrator. His books include When Sheep Cannot Sleep: The Counting Book, Millie’s Marvelous Hat, and Lily Takes a Walk. He has worked with numerous artists and poets, especially with poet John Agard, with whom he has collaborated on a number of books including The Young Inferno and Goldilocks on CCTV. Kitamura has contributed to the latest issue of Monkey Business (5) “Variation and Theme,” a graphic narrative inspired by a Charles Simic poem.

Kelly Link is an award-winning short-story writer, and one of the most important voices to appear in the United States in the 2000s. She runs her own publishing house, The Small Beer Press, with her husband Gavin Grant. She has published four collections of stories: Stranger Things Happen, Magic for Beginners, and Pretty Monsters (all of which have been translated into Japanese) and her latest book Get in Trouble, published in February 2015. She contributed an essay on the experience of her visits to Japan in Monkey Business 5.

Aoko Matsuda is one of Japan’s most promising young Japanese novelists. She has published two collections of short stories and has also translated Karen Russell’s St. Lucy’s Home for Girls Raised by Wolves. Among English translations of her work are “Photographs Are Images,” translated by Jeffrey Angles and included in the current issue of Monkey Business (5), as well as “Smartening Up,” translated by Polly Barton in the online edition of the literary magazine Granta.

To read an excerpt of Matsuda's work click here.

Roland Kelts is the author of the critically acclaimed and best-selling Japanamerica. His articles, essays and stories are published in The New Yorker, Time, The Wall Street Journal, Zoetrope: All Story, The Village Voice, A Public Space, Newsweek Japan, Vogue, Cosmopolitan, The Yomiuri and The Japan Times among others. He is also a regular contributor to CNN, The BBC, NPR and NHK. He is a visiting scholar at Keio University and contributing editor to Monkey Business. He divides his time between New York and Tokyo, and his forthcoming novel is called Access.

Ted Goossen teaches Japanese literature and film at York University in Toronto. He is the general editor of The Oxford Book of Japanese Short Stories and has published translations of stories and essays by Hiromi Kawakami, Haruki Murakami, Yoko Ogawa, Sachiko Kishimoto, and Naoya Shiga, among others. He is the co-founder and co-editor of Monkey Business.

Motoyuki Shibata is a professor at the University of Tokyo and the co-founder of the literary magazine Monkey Business, which exists in both English and Japanese as an English-language journal focusing on contemporary Japanese literature. He also runs Monkey, a Japanese literary magazine. A translator, reviewer, and essayist, he has translated into Japanese the works of contemporary American authors including Thomas Pynchon, Paul Auster, Steve Erickson, Steven Millhauser, Richard Powers, Stuart Dybek, Barry Yourgrau, Ben Katchor, Ethan Canin and Kelly Link, among others. He received the 1992 Kodansha Essay Award for his book The Half-Hearted Scholar and was the winner of the 27th Suntory Prize for Social Sciences and Humanities for his collection of critical essays, American Narushisu (American Narcissus).

Can’t make it to this program? Tune in to AsiaSociety.org/Live at 6:30 pm New York time for a free live video webcast. Viewers are encouraged to submit questions to moderator@asiasociety.org, or to tweet questions using the hashtag #AskAsia