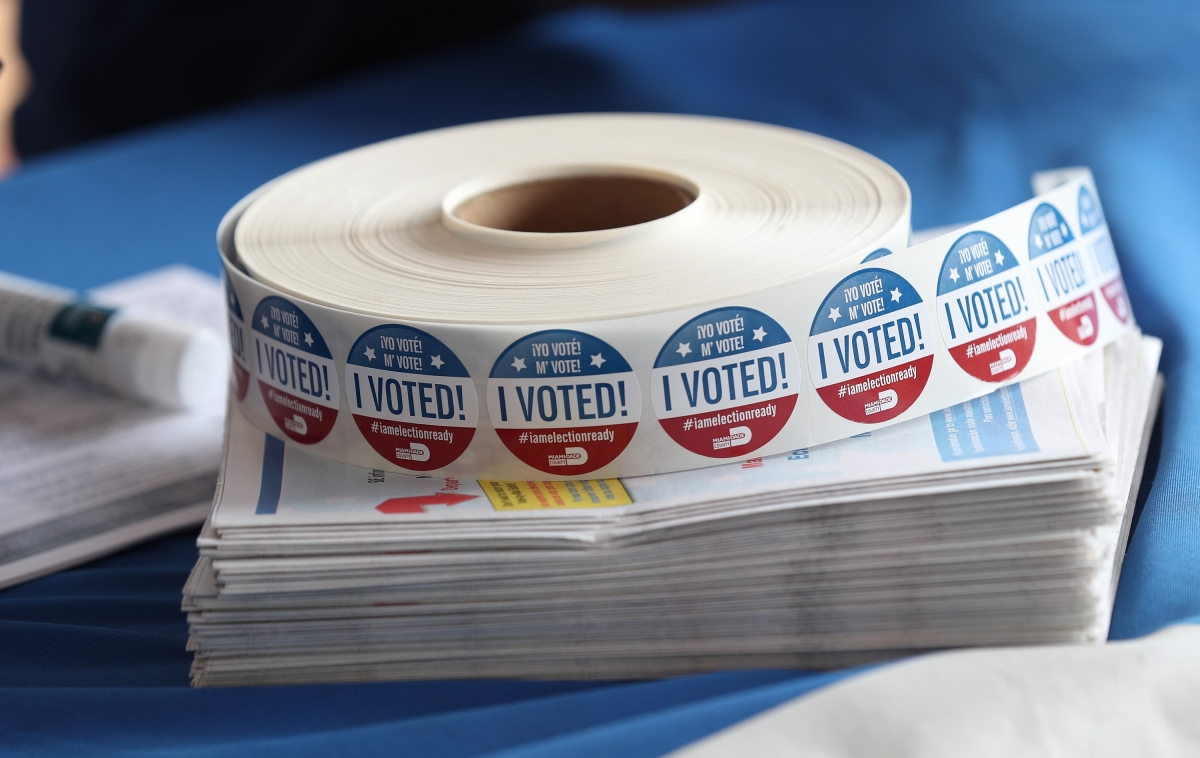 I voted stickers are seen as people drop off their Vote-by Mail ballots. The voters were casting their ballots ahead of the November 3rd election where President Donald Trump and Democratic presidential candidate Joe Biden are facing off against each other (Joe Raedle/Getty Images).

***This is a members-only program and registration is required.***

On November 3, voters in the United States will go to the ballot box – actually millions have already cast ballots – and make their choice: either to stay the course with President Donald Trump, or chart a new course with former Vice President Joe Biden. One of the few things the two campaigns – and a broad range of campaign-watchers – agree on: the stakes are extremely high, the COVID-19 pandemic has altered the political landscape in myriad ways, and the differences between a Biden administration or a second Trump administration would be profound. Recent Asia Society events have shown the intense interest across Asia in the election, and the implications for issues as varied as trade, climate change, U.S.-China relations and more. What will the next four years portend for the U.S., Asia, and the world?

Amb. Chan Heng Chee is the Global Co-Chair of Asia Society and Ambassador-at-Large with the Singapore Foreign Ministry. She chairs the Lee Kuan Yew Centre for Innovative Cities in the Singapore University of Technology and Design. She is Chairman, Board of Trustees, ISEAS – Yusof Ishak Institute (ISEAS), a member of the Presidential Council for Minority Rights, Deputy Chairman of the Social Science Research Council, a member of the Science of Cities Committee, National Research Foundation, a member of the Advisory Council on the Ethical use of Artificial Intelligence (“AI”) and Data, Ministry of Communications and Information. She is also a member of the Board of Trustees of the National University of Singapore and a member of the Yale-NUS Governing Board. Previously, she was Singapore’s Ambassador to the United States and Singapore’s Permanent Representative to the United Nations with concurrent accreditation as High Commissioner to Canada and Ambassador to Mexico.

Wendy Cutler is Vice President of Asia Society Policy Institute (ASPI) and Managing Director of its Washington, D.C. office.  In these roles, she focuses on building ASPI’s presence in Washington — strengthening its outreach as a think/do tank — and on leading initiatives that address challenges related to trade and investment, as well as women’s empowerment in Asia. She joined ASPI following nearly three decades as a diplomat and negotiator in the Office of the U.S. Trade Representative. Most recently, she served as Acting Deputy U.S. Trade Representative, working on a range of U.S. trade negotiations and initiatives in the Asia-Pacific region. In that capacity she was responsible for the Trans-Pacific Partnership (TPP) agreement, including the bilateral negotiations with Japan. She also was the chief negotiator to the U.S.-Korea (Korus) Free Trade Agreement.

Vali Nasr is the Majid Khadduri Professor of International Affairs and Middle East Studies at the Paul H. Nitze School of Advanced International Studies of Johns Hopkins University. Between 2012 and 2019 he served as the Dean of the School, and between 2009 and 2011 as Senior Advisor to U.S. Special Representative for Afghanistan and Pakistan Ambassador Richard Holbrooke. Among many books, he is the author of The Dispensable Nation: American Foreign Policy in Retreat (2013); Forces of Fortune: The Rise of a New Muslim Middle Class and How it Will Change Our World (2009); and The Shia Revival: How Conflicts within Islam will Shape the Future (2006). He has advised senior American policy makers, world leaders, and businesses including the President, Secretary of State, senior members of the U.S. Congress, and presidential campaigns. He is a member of International Board of Advisors of the Blavatnik School of Government at Oxford University, the International Board of Advisors at the American University of Beirut, and the Board of Advisors of Rajaratnam School of International Studies in Singapore.