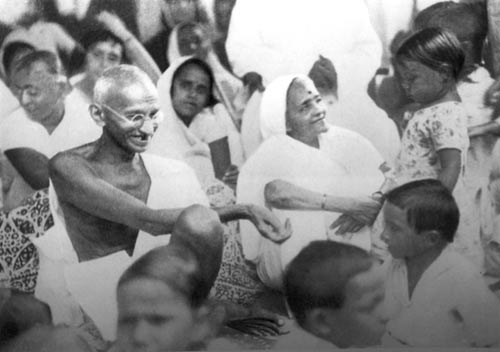 Gandhi and Kasturba with children

This event celebrates 75 years of India's independence with Gandhi's talisman "Recall the face of the poorest and the weakest wo/man whom you may have seen, and ask yourself if the step you contemplate is going to be of any use to him/her."

It will highlight global grassroots constructive action to eradicate child sex trafficking, recognize individuals who have stood up for The Last Girl, and feature a keynote conversation with writer Gloria Steinem and activist Ruchira Gupta.

A panel with awardees Ruby Sales, legendary civil rights activist, and one of 50 civil rights leaders showcased by the Smithsonian National Museum of African American History and Culture in Washington, DC, Chloe Flower, musical powerhouse and Grammy show-stopper, Tatiana Kotlyarenko, Advisor on Anti-Trafficking Issues at the Organization for Security and co-operation in Europe (OSCE), and Kendall Alaimo, survivor leader and founder of #SeatforSurvivors, will kick off the evening.

Followed by a reception

The NGO Apne Aap works to end sex trafficking inspired by the twin Gandhian principle of Ahimsa and Antodaya in India and the US. It has helped thousands of girls and women access education, dignified livelihoods, and legal protection, especially among de-notified tribes trapped in inter-generational prostitution.

In partnership with Apne Aap

Part of Spotlight on India