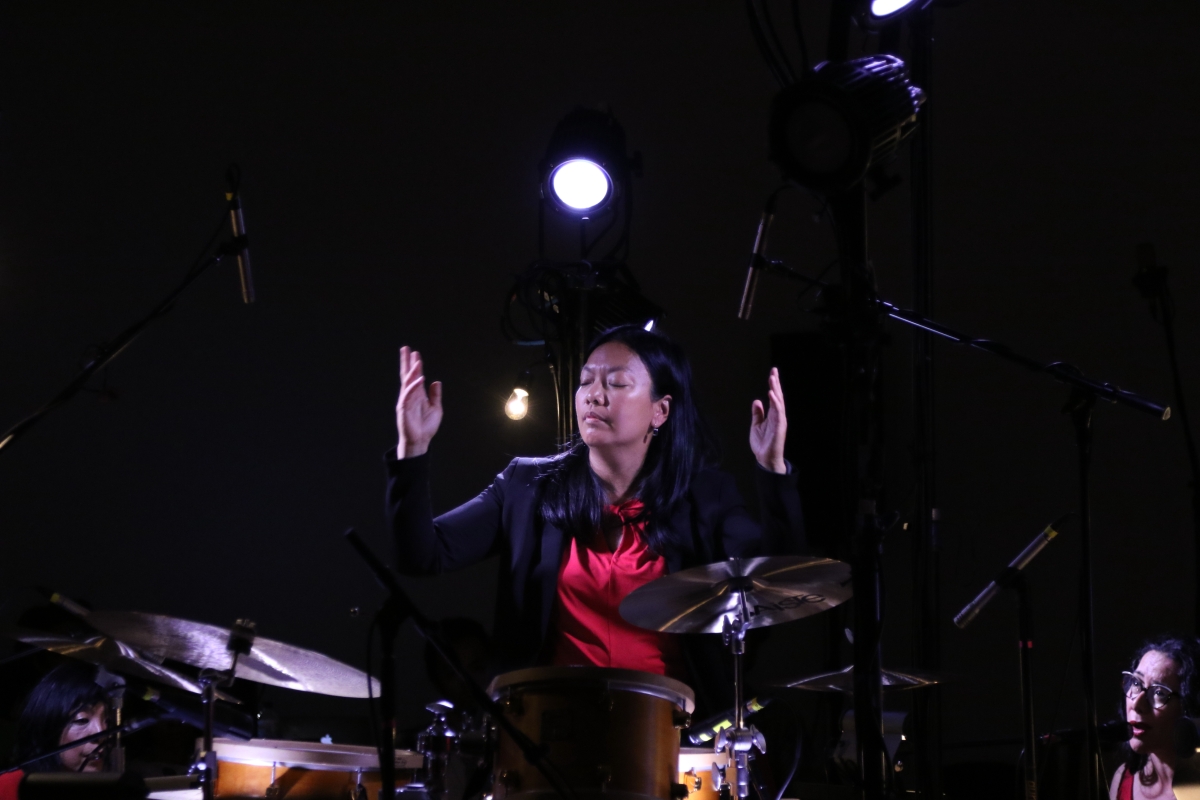 Please note: this performance is taking place at a different venue, on Governors Island on the lawn of Nolan Park Building 10 A as part of Harvestworks’ 2019 New York Electronic Art Festival.

Drummer and composer Susie Ibarra leads the DreamTime Ensemble in the performance of Fragility: A Game of Polyrhythms. A dynamic musical ‘game piece’, the performance invites members of the audience to conduct the ensemble through rhythms and musical motifs. Using polyrhythms as a model for human interdependence, the work is a staging of relationships with the ‘game’ element allowing for a spirited shifting of roles and perspectives in live musical experimentation. Drawing on deep knowledge of Asian and jazz percussive traditions, Ibarra and the DreamTime Ensemble lead audiences on a journey into a mesmerizing musical environment of multi-layered sonic textures.

Formed by Susie Ibarra, the DreamTime ensemble includes Claudia Acuña, vocals; Yves Dharamraj, cello; Cornelius Dufallo, violin; Yuka C. Honda, electronics; Susie Ibarra, drumset and percussion; and Jake Landau, guitar, banjo and keyboard. Their first album Perception, released in December 2017, was chosen by The New York Times for their top ten playlist, premiered at WinterJazzFest NYC 2018, and was featured in WBGO’s Take Five Gives the Drummer Some which featured Drummer-Led records. The album has many influences, including the late, great Brazilian percussionist Naná Vasconcelos, who was meant to record for the album.

Fragility: A Game of Polyrhythms builds upon explorations conducted in an earlier work Fragility: An Exploration of Polyrhythms, which was commissioned and premiered at Asia Society in June 2018 as part of Creative Common Ground, and developed in partnership with Pioneer Works artist residency program. Creative Common Ground is an initiative that expands contemporary performance practice by commissioning, producing, and presenting artists who explore beyond traditional disciplinary boundaries. The initiative is supported by a generous grant from The Andrew W. Mellon Foundation. Fragility: A Game of Polyrhythms is presented in partnership with Harvestworks and their 2019 New York Electronic Art Festival.

About the artist:
Susie Ibarra is a Filipina-American composer, percussionist, and sound artist. Her sound has been described as “a sound like no other’s, incorporating the unique percussion and musical approach of her Filipino heritage with her flowing jazz drumset style” (Modern Drummer Magazine) and her compositions as “calling up the movements of the human body; elsewhere it’s a landscape vanishing in the last light, or the path a waterway might trace” (The New York Times). Recent commissions include Kronos String Quartet’s 50 for the Future Project Pulsation, PRISM Saxophone Quartet + Percussion’s Procession Along the Aciga Tree, Talking Gong trio with pianist Alex Peh and flautist Claire Chase, film score When the Storm Fades directed by Sean Devlin, and an interactive performance Fragility: A Game of Polyrhythms commissioned by Asia Society. Ibarra is a 2019 United States Artist Fellow in Music.

She is a 2018 Asian Cultural Council Fellow in support of her sound research of the project An Acoustic Story on Climate Change: Himalayan Glacier Soundscapes which includes recording and researching sound along the Ganges from source to sink in collaboration with glaciologist and geomorphologist Michele Koppes. Ibarra leads the DreamTime Ensemble, which recently released the album Perception, a suite of music exploring memory and shifting sensory experiences. She performs in collaborative ensembles Mephista, Yunohana Variations, and LIMBS. Since 2012, she has been a faculty member at Bennington College where she teaches percussion, performance, improvisation, and art intervention. Ibarra is a Yamaha, Vic Firth, and Paiste Drum Artist.

For event details visit https://asiasociety.org/new-york/events/fragility-game-polyrhythms Governors Island Nolan Park Building 10 A (outdoors on lawn next to the building)