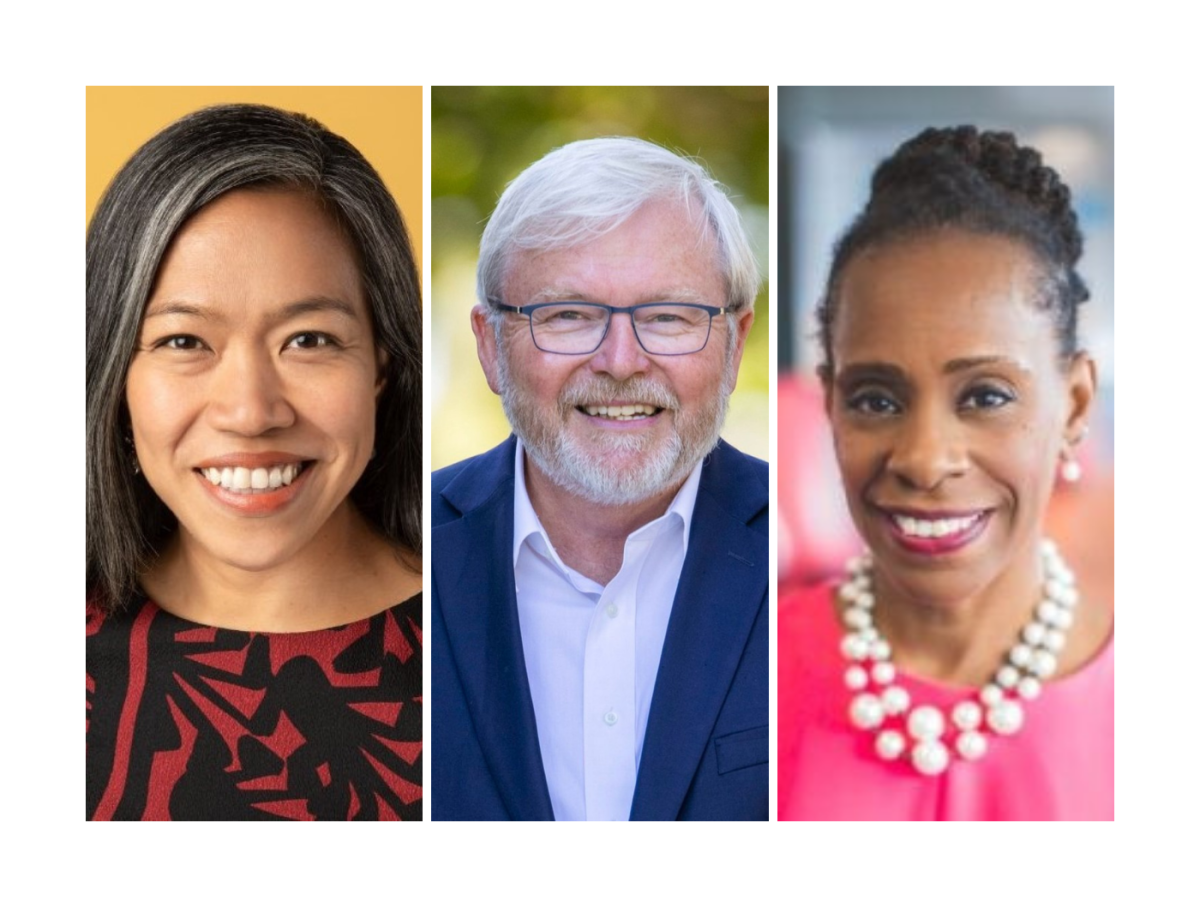 The discussion will explore the history of the Asian and Asian American experience in New York City, and the impact that the rise of violence and anti-Asian sentiment since the beginning of the pandemic have had on these communities. We'll hear from the City's new Administration steps they are taking to fight violence and racism against the AAPI community.

Join us on Tuesday, October 4 from 4 - 6pm for this timely discussion. To RSVP, please email atusin@asiasociety.org.

Lulu C. Wang is the CEO of Tupelo Capital Management, which she founded in 1998 for partnerships and transitioned into a family office in 2008. Prior to that, Ms. Wang was a director and executive vice president of Jennison Associates Capital Corporation, where she managed large equity funds for pension, endowment, and mutual funds

Ms. Wang serves on the boards of the Metropolitan Museum of Art, Rockefeller University, the Asia Society, and Columbia Business School. She also serves on the advisory council for Bank of America Private Bank, is a retired director of MetLife Insurance, and a trustee emerita of Wellesley College, where she was the commencement speaker in 2016.

Ms. Wang earned an MBA from Columbia Business School and a BA in English literature from Wellesley College. In her free time, she and her husband collect and race vintage cars. They also collect American paintings, furniture, and folk art.

She previously served as the James R. Dumpson Chair in Child Welfare Studies at the Graduate School of Social Service at Fordham University. In her role as the Dumpson Chair, Ms. Williams-Isom worked with faculty and students to develop research, programs, and policy analyses that improved services to underserved children and families. She used an equity and social justice lens to focus on the challenges of and solutions for families of color and promoted an interdisciplinary approach toward improving the quality of life for this population.

Previously Ms. Williams-Isom served as the Chief Executive Officer for the Harlem Children’s Zone (HCZ), before which she served for five years as HCZ’s Chief Operating Officer. As CEO, she oversaw all programs in HCZ’s cradle-through-college pipeline, including the Promise Academy Charter Schools. She led HCZ’s 2,000+ staff, and strengthened the organization’s use of data to improve services and outcomes for 25,000 children and adults in Central Harlem. She also led the development of HCZ’ Healthy Harlem initiative which serves over 7,000 children and 3,000 adults. Healthy Harlem was designed to combat childhood obesity and promote health and wellness at the community level. She assumed the position of CEO in July 2014 and served in the role for six years.

Prior to joining HCZ, Ms. Williams-Isom held leadership positions at New York City’s Administration for Children’s Services (ACS) for 13 years, concluding her tenure as Deputy Commissioner of the Division of Community and Government Affairs. While at ACS, she instituted and oversaw the implementation of several innovative initiatives, including the first ever ACS Leadership Academy for Child Protection, a program designed to help the 160 ACS Child Protective Managers lead the 3,800 frontline staff responsible for investigating the 55,000 reports of child abuse and neglect each year.

Ms. Williams-Isom found her calling to help improve the lives of vulnerable children and families when she was still a child herself. Growing up with a single mother in Queens, she witnessed firsthand the many challenges confronting kids in struggling communities. But it was always clear that, with the right support and opportunities—above all, education and a lot of love—all children have the potential to do extraordinary things.

Ms. Williams-Isom earned a bachelor’s degree in political science and psychology from Fordham University. Soon after, she began working in Community Affairs for the New York Police Department in Brooklyn. While working in Brooklyn at the height of community policing in the 1980s fueled her commitment to social justice, it was during her time as a student at Columbia Law School that she fully discovered her passion for advocacy work and came to appreciate the critical role played by communities in finding lasting solutions to social problems. After receiving her J.D., she practiced law for five years at two of New York’s most prestigious firms before joining ACS.

Ms. Williams-Isom serves on the board of directors of Child Trends, a nonprofit research organization; the Advisory Board for Columbia Entrepreneurship, Innovation and Design; the executive committee of the board of trustees of the Central Park Conservancy; the board of Graham Windham; the board of trustees of Collegiate School; the board of the Metropolitan Montessori School; the Board of Fellows of Weill Cornell Medicine and the board of trustees of Partnership Schools. She also served on the Advisory Council of the My Brother’s Keeper Alliance, inspired by President Obama’s My Brother’s Keeper initiative. In January 2016, she was appointed by New York City Mayor Bill de Blasio to his Children’s Cabinet Advisory Board and selected to be a member of the spring 2016 cohort of the Aspen-Pahara Education Fellows Program. She is the recipient of a Public Interest Achievement Award from the Public Interest Law Foundation at Columbia Law School (2015) and an Annie E. Casey Foundation Children and Families Fellowship (2007-2008). In May 2018, she received an honorary doctorate from the Fordham University Graduate School of Social Service. In October 2019 she was chosen as one of the “Nonprofit Power 100” by City & State magazine and she was chosen as one of the “The 2020 Education Power 100” in February 2020. Most recently in May 2021 she was mentioned on MSNBC as an “unsung hero” on a feature entitled “Forbes’ 50 Women Over 50 Making a Difference in Education.”

Routinely sought after for her expert guidance on child and family wellbeing and community development, Ms. Williams-Isom has been featured in The New York Times, The New York Daily News, Barron’s, Crain’s New York, The Economist, The Chronicle of Philanthropy, and Essence, as well as on WABC’s Here and Now and CUNY-TV’s Black America and The Historymakers.  A native New Yorker, she is a long-time resident of Harlem.  She lives with her husband of 30 years, Phil, and with the help of her 90 year old mother who resides with them has raised three children, Aiyanna (28), Phillip (25) and Ande (19).

Maria Torres-Springer is the NYC Deputy Mayor for Economic and Workforce Development, charged with spearheading the Administration’s efforts to strengthen and diversify its economy, invest in emerging industries, bolster small business, connect New Yorkers to family-sustaining jobs and expand access to arts and culture.

She was previously Vice President of US Programs at the Ford Foundation where she oversaw the Foundation’s domestic grant making and made historic investments in support of racial equity, workers’ rights, voting rights, and arts & culture across the country.

Maria has a long track record of public service with the City of New York. She led three agencies with over 3,000 employees and approximately $2 billion in annual operating budgets, addressing some of the city’s most significant public policy challenges. Throughout her tenure in government, she worked to create powerful partnerships among communities, business, and the agencies she has led in pursuit of expanded economic opportunity for all New Yorkers.

Maria served as commissioner of the New York City Department of Housing Preservation and Development, the nation's largest municipal housing agency. She led the implementation of Housing New York, a five-borough, 12-year plan to create or preserve 300,000 affordable homes. During her tenure, she steered the financing of approximately 60,000 affordable homes, more than any two-year period in HPD’s history. She focused on the production of housing for the city’s most vulnerable communities while launching several new programs to protect tenants’ rights.

Earlier, as the first woman to serve as president of the New York City Economic Development Corporation, Maria led the implementation of the new city-wide ferry service and made major investments in key sectors of New York City’s economy. Marshaling the energy and drive of community leaders, she also spearheaded several neighborhood revitalization plans across the city.

Maria also served previously as the executive vice president and chief of staff at NYCEDC as well as chief operating officer for Friends of the High Line.

Maria earned her bachelor's degree in ethics, politics, and economics from Yale University and a master’s in public policy from the Kennedy School of Government at Harvard University. She lives in Brooklyn with her husband and two daughters.