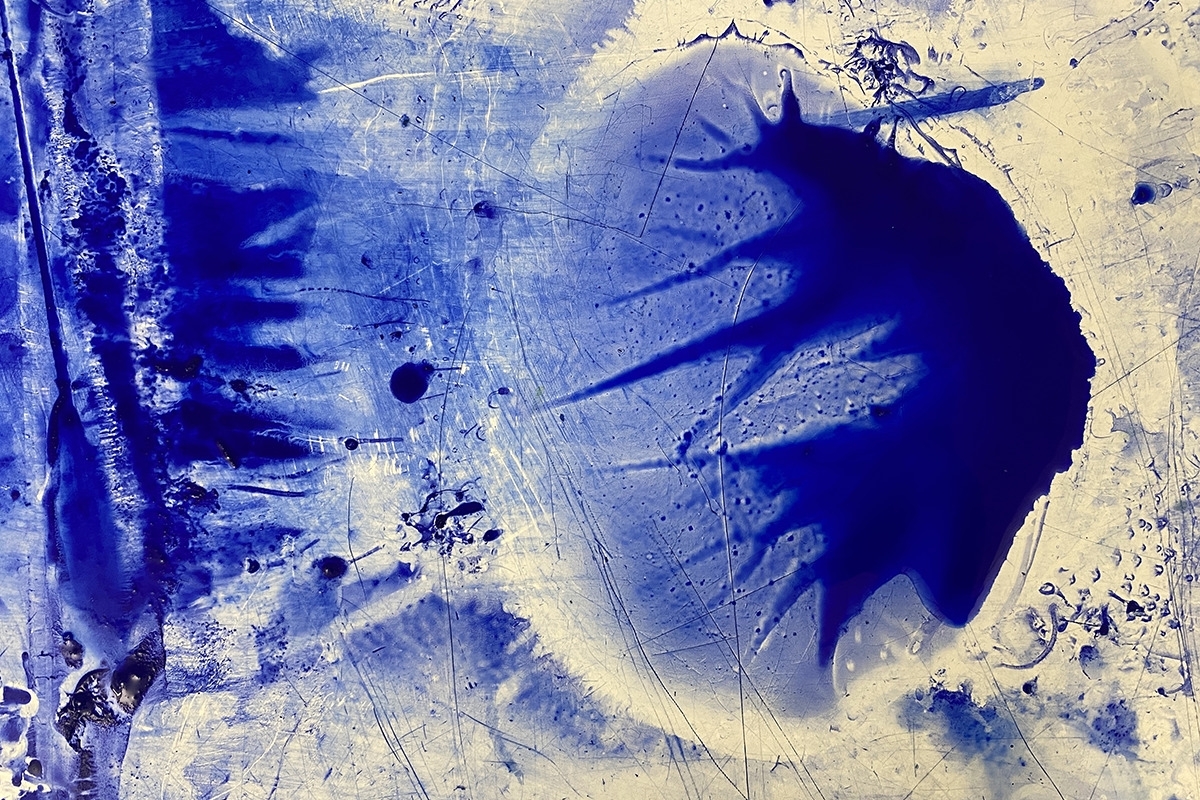 Bahar Behbahani. "Mother River," 2022. Video still of drawing made by the artist with lapis lazuli on board. Duration: 1 minute. Video still courtesy of the artist

Tune in Monday, May 23 at 6:30 p.m. New York time for a free live video webcast. #AsiaSocietyLIVE

Join Asia Society Museum Director Michelle Yun Mapplethorpe in conversation with Persian artists Bahar Behbahani and Farsad Labbauf about their respective practices and their experiences working in the diaspora.

Bahar Behbahani is a painter, collaborator, educator, and a hospitable instigator. Born and raised in Iran, she currently lives and works in New York City. Behbahani’s multilayered work explores the complexities of memory, loss, adaptation, and a fundamental search for a sense of place. Behbahani’s community-oriented installation I Can Drink Stars was featured in the 2019 Lahore Biennale and subsequently installed as public art in Lahore, Pakistan. Her solo exhibition, Let the Garden Eram Flourish, was presented at the Hood Museum of Art at Dartmouth College in 2017. Her multidisciplinary series Garden Coup has been shown at the Thomas Erben Gallery in New York and the Shanghai Biennale (2016). Behbahani’s work has also been featured at the Moscow Biennale (2017), the Sydney Biennale (2012), the Sharjah Biennial (UAE) (2011), The Eli and Edythe Broad Art Museum at Michigan State University, and the Tribeca Film Festival, among others. Behbahani received a Creative Capital Award in 2019 and the Joan Mitchell Foundation Painters and Sculptors Grant in 2020.

Farsad Labbauf is a multidisciplinary Iranian artist living and working in the New York area. Best known for his linear figurative paintings, Labbauf immigrated to the United States at the age of thirteen. He received his Bachelor of Fine Arts, followed by a second degree in Industrial Design, from the Rhode Island School of Design. The origins of Labbauf’s work lie in Figurative Expressionism, a style he practiced for more than two decades leading to the creation of his linear figurative painting style. His paintings as well as his ongoing sewing series are inspired by studies in quantum physics and a reverence for ideas of Unity and Monism. Labbauf began exploring these ideas during his first visit back to his native country of Iran twenty-two years ago. His works have been featured in more than sixty group shows across the globe, at venues such as Ex Aurum, Pescara, Italy; Jersey City Museum, New Jersey; Leslie-Lohman Museum of Art, New York; and Saatchi Gallery, London. Additionally, he has held solo exhibitions in Amsterdam, Boston, New York,  and Tehran. Labbauf's work can be found in numerous public and private collections including the Carsten de Boer Collection, Lie Sang Bong Collection, Mohammed Afkhami Collection, The Newark Museum of Art, Saatchi Gallery, and the Salsali Private Museum. His work is currently represented by Roya Khadjavi Projects in New York and Etemad Gallery in Tehran.