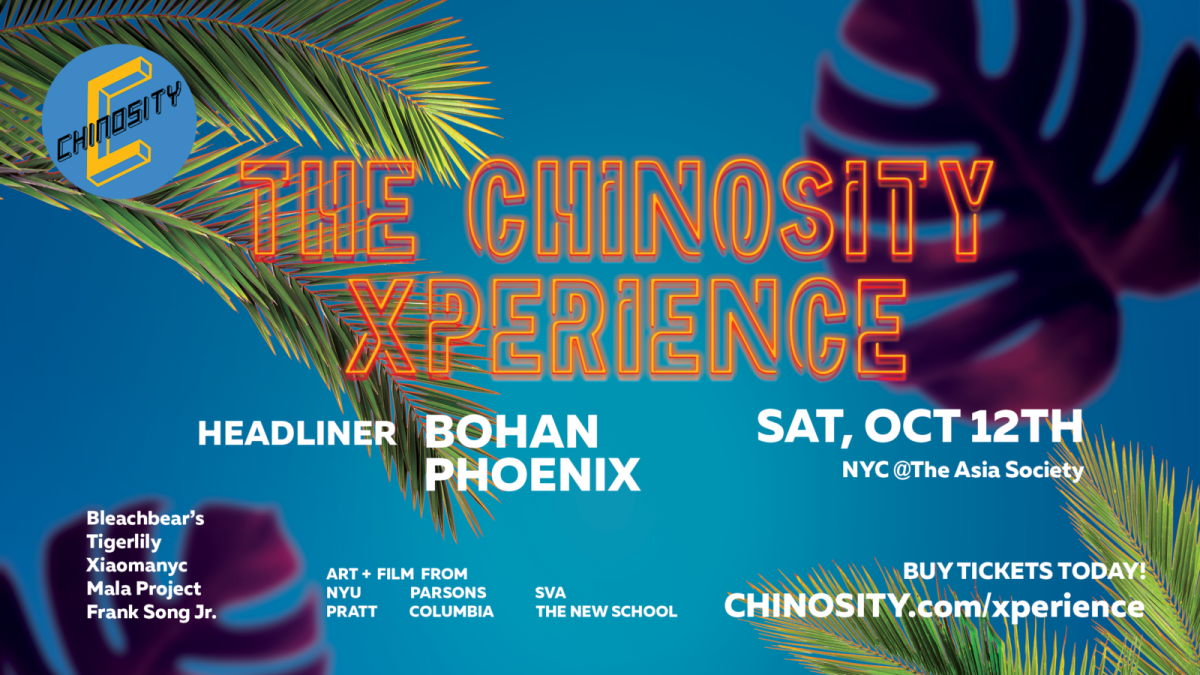 The Chinosity Xperience is an intimate and interactive experience that empowers Asian and Chinese artists, musicians, and creatives. The Xperience features distinct lounges, offering attendees access to musical performances, a student pop-up art gallery, and discussions with creatives.

Join us for a celebration of Chinese culture and the Asian diaspora in New York City. The Xperience draws from both established and upcoming local artists, creatives, and music.

Bohan Phoenix is a China-born, New York City-raised rapper best known for bilingual rhymes that champion his multi-national identity. After moving to the U.S. at age 11, Bohan learned English through rap, falling in love with hip hop after watching Eminem in 8 Mile, another outsider finding acceptance through music. Bohan has since toured the U.S. and China extensively, collaborating on both sides of the globe with the likes of Higher Brothers in the East or Ryan Hemsworth, Benji B or Dumbfoundead in the West.

Tigerlily is a Seattle-raised, New-York-City-based pop artist currently working on her debut album. Prior to launching as a solo artist, she was the frontwoman of the all-girl rock band Bleachbear which was named Seattle's Best Underage Band and released three albums, the most recent of which, Deep Sea Baby, came out in October 2019.

Rob Chen is an NYC actor & artist working in film, music, and media. He recently released his single Y’all produced by Mixtape Seoul under the alias Blu Hyku. He stars in the film Secret Lives Of Asians At Night which has been screened domestically and internationally. He co-hosts China On The Internet, a podcast that delivers news on Chinese modern culture and entertainment, and is also a member of Model Majority, NYC’s first Asian American sketch comedy team. Rob loves pistachio ice-cream.

Frank Song, Jr. plays music across the U.S. and Europe, singing about the struggles in life, the painful beauty of love, and writes songs about his identity as a first-generation Chinese-American gay man. His music carries sound from American folk and bluegrass, Chinese folk, R&B, and soul. Frank’s ultimate goal is to bring peace, light and healing to the world, as serve as the Chinese-American artist role model he didn’t have growing up.

Arieh Smith is a popular Chinese and English-language vlogger with over a million fans in China and around the world. Known to his audience as Xiaoma, he spends his days introducing people on the streets of New York City to Chinese and Asian culture. On YouTube, his videos can be found at Xiaomanyc. A longtime student of Chinese since a stint in Beijing in 2009, he now teaches the language on a weekly volunteer basis at a nonprofit in Manhattan.

Melissa Shan works in marketing for New York City restaurant MáLà Project. From her start as a host, Melissa has developed a genuine interest in the hospitality industry. Besides MáLà Project, Melissa has held marketing positions in Mount Lai and PUBLIC Hotel.

Tickets are $15 for members, $20 for seniors/students, and $25 for regular admission.

Tickets include snacks, drinks, and chances to win prizes.