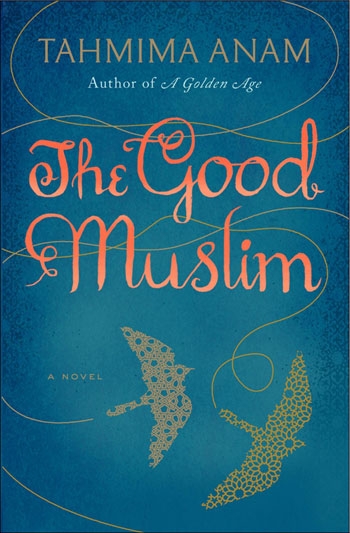 Book One
All That Is in the Heavens and on Earth

It would not have been possible to go home if Silvi hadn’t died. Maya’s thoughts rested for a moment on this fact as she settled herself on the wooden bench in the third-class carriage, balancing on her lap the sum of all her worldly posses­sions: a small rucksack containing two saris, a kameez, a pair of trainers, a doctor’s case with a stetho and, for her mother, a young mango tree. The tree had been difficult to wrap; it was heavier than it looked and bulged awkwardly where the roots were packed in soil. ‘Tree won’t live,’ the farmer who sold it to her said. ‘Rajshahi tree, it belongs in Rajshahi.’

An old lady with a tiffin carrier slid into the space beside her. She stared for a moment at Maya, then clamped the tiffin carrier between her knees, pulled out a string of prayer beads and began to mutter the Kalma under her breath.

Of course it would survive. There was an empty patch at the western edge of the garden, and if anyone could coax mangoes out of that tree it would be Ammoo. But seven long years had passed — she couldn’t even be sure the patch was still empty.

A group of young men entered the compartment. Immediately they began to laugh and smoke, passing around a box of matches and a packet of Star cigarettes. Maya resisted the urge to scold them and instead pressed her face to the horizontal bars on the open window, gazing at the litter-strewn tracks, the station platform where boys were selling peanuts and cold drinks, and beyond to the scattered patches of green where the groves of mango stood. She would miss it. The two-room house she had rented now stood empty, its rough concrete floor swept and washed. And the verandah where she had seen her patients, that too had been cleared, the examination table, the small stand on which she kept her equipment, the wooden chair on which she draped her white jacket at the end of the day, ballpoint clicked shut in its pocket.

It had started with a few handfuls of mud. She told herself the wind must have tossed a coconut or a piece of wood against the walls of her house. For three days she ignored the sound.

On the fourth night, the laugh. Unmistakable, escaping between the fingers of someone holding a palm over his mouth. A young man’s laugh, nervous and girlish.

She ran outside and peered into the darkness, but she couldn’t see anything. There is nothing darker than a moonless night in Rajshahi.

It had ended, months later, with the glint of a knife. She remem­bered it now: a gentle motion like the lick of a cat, the bright line of it; and the flash of white that caught her eye, the hem of a long robe floating just shy of a man’s ankles as he slipped out of the room and disappeared. Her hand went to her throat, to the scar that still stood there, black and angry, but he hadn’t cut her, only laid his knife on her: it was a way of saying that they had unfinished business, and that he could reappear at any moment to end the story.

Yes, she would miss it. Nazia and the house and the mangoes and the path around the pond. But the cat’s lick of that knife, and the scar on her neck, meant she might never return.

Just before the train pushed off, a couple with two small children occupied the bench opposite. The mother held one of the chil­dren on her lap, while the other, older, squeezed into the space between her parents. The mother smiled shyly; Maya guessed it was her first time on a train — nose pin gleaming, a pair of thin gold bangles on her wrists, her fortune.

Really, it was no tragedy her brother’s wife had died. The prospect of facing Silvi — sanctimonious, her face packed tightly into the burkha she hadn’t been seen without since the war — was largely what had kept Maya from her home. There was, of course, also her brother, Sohail. And Ammoo, who had abandoned her to her rage — her rage and the deep, driving smell of burning books, a scent that had never left her during the seven years she had gone missing. The train made its way through Rajshahi, and then into Natore, the landscape remaining flat and dry, the smells of the paddy mingling with the mustard plants that shone yellow, the burning cakes of dung.

The old woman opened her tiffin carrier, releasing the aroma of dal and fried cauliflower. The family opposite followed suit, unwrapping their bread and bhaji. Maya felt a tap of hunger; she had neglected to pack anything for the journey. The mother carefully tore her bread into tiny pieces and placed them in the baby’s mouth. She passed the rest of the food to her husband, avoiding his eye as he took the newspaper-wrapped package from her.

The older girl was refusing to eat, tugging at her mother’s elbow and shaking her head. Maya rooted around in her bag and emerged with two tamarind sweets. She offered one to the girl, who stood up, climbed into Maya’s lap and took the sweet from her outstretched hand. The mother protested, but Maya waved her away. ‘It’s all right,’ she said. The girl pulled her knees up against her chest and fell asleep. Maya must have slept too, because when she opened her eyes the girl was heavy in her arms and the train was just outside Bahadurabad Ghat. She felt a nudge on her shoulder. The old woman was pointing to her tiffin carrier, which held half a slice of bread and a smear of rice pudding.