Book Excerpt: 'Across Many Mountains' by Yangzom Brauen 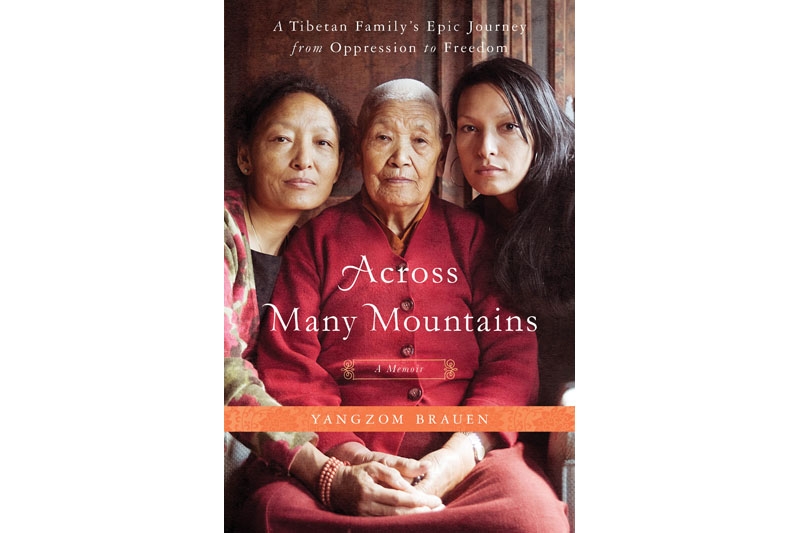 It is late autumn and the wind whistles across the dry, rocky fields and meadows. As I step out of the house a fierce gust pushes me aside, so strong that I have to tilt my body into its force. Mola stands with her legs planted wide, buttressing herself against the gale.  Mola means grandmother in Tibetan. My grandmother is a ninety-one-year-old Buddhist nun. In the tradition of all Buddhist nuns, her now snow-white hair is cropped close to her scalp, and she wears only red, orange, and yellow. Her floor-length Tibetan chupa billows out like a sail, and it takes all her concentration to keep her balance. My grandmother wants to perform kora.  For Tibetans, kora means walking around a sacred place absorbed in prayer, a kind of pilgrimage that can encompass hundreds of miles or only a few yards.

My parents, my brother, Mola, and I have all met here for a short family holiday. Life has scattered us: Bern, Zurich, Los Angeles, New York, and Berlin. If Tibet had remained Tibet, we would all be together in Pang, a remote mountain village in the southeast of Tibet, where Mola, along with my grandfather, a Buddhist monk, lived in a monastery. But my grandparents fled the country in the winter of 1959 when Chinese soldiers were destroying monastery after monastery, looting their treasures, leaving only rubble. Fifty years on, the country still suffers under the Chinese occupation. Every member of my family feels the pain of this.

Later in the day, when the wind has calmed and the bright red sun is sinking, Mola sits in front of her farmhouse altar and begins to sing. My brother and I often listened to her songs as children  but we haven’t heard her sing them for a long time now. In a voice that sounds a little shaky but is still clear and mild she sings to us of a long-gone, faraway world. Singing with a voice that tells us of Tibet, Mola sings as she sang as a young girl—and as a nun—when  she lived the life of a hermit in a hut high in the Tibetan mountains.

Back then, she would meditate at the first light of day. Now, toward the end of her long life, she meditates with the last rays of sunlight. She is free from pain, free from melancholy and sorrow. She is entirely here, in the present, entirely with us. She knows she will be leaving us one day soon, but the thought does not scare her. She is calm and composed; she does not cling to earthly existence. My mother—my amala—worships in a different way. As Mola sits by her altar, her butter lamps lit, my mother climbs to the small whitewashed Greek Orthodox chapel at the top of the hill above our house. She loves to go there at the end of the day, to light a candle, leave an offering, and pray. Often she is the only one there, but sometimes she is joined by a few villagers who pray to their Greek Orthodox god as she prays in Tibetan to her deities. Mola would never think of praying in another religion’s chapel. She must bring her own altar with her, no matter where she is. Meanwhile, I read books while lazing in the garden hammock, listening to the chickens and crickets and to the sound of Mola’s prayers emanating from the house. How different we three generations are . . .

When my mother has made her way back from the chapel on the hill, and Mola has finished her prayers, the three of us stand outside together to watch the sun set behind the mountains. This landscape of stone and sky looks almost like Tibet. That is why my family loves this place. Mola, Amala, and I fall silent as the last glow of the sun fades in the sky. I am moved almost to tears. I feel as if we are nearing the end of a long journey, a journey I want to share with you.

From Across Many Mountains by Yangzom Brauen. Copyright © 2011 by the author and reprinted by permission of St. Martin’s Press, LLC.