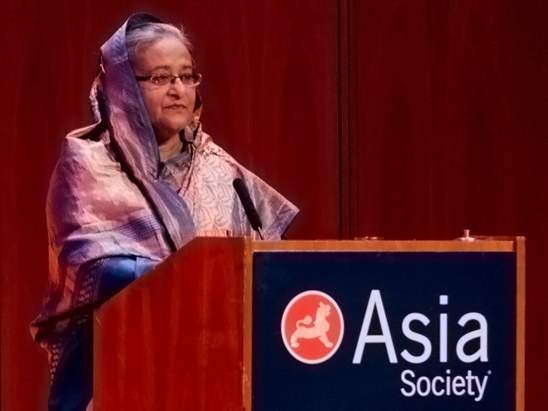 The following is the complete text of remarks by Sheikh Hasina, Prime Minister of Bangladesh, regarding the launch of the 2012 Climate Vulnerability Monitor at Asia Society New York on September 26, 2012.

I am very happy to join you all at the launching of the Climate Vulnerability Monitor. Thank you, DARA, for such a seminal publication. It brings forth useful and convincing finidings from many recent studies on climate change — highlighting the challenges to be faced, particularly by the climatically vulnerable countries. These surely indicate the adverse and inevitable affects on all countries, in varying degree of intensity.

For decades, we have seen numerous reports of the grave consequences of unbridled carbon emissions in the atmosphere. What is sad is that in spite of 17 years of negotiations, a legally binding document on global warming still remains a far cry. Despite compelling science-based evidence and growing calls, we observe an inertia on the part of those responsible for the danger posed by climate change. It is out of such compulsion that the countries that stand to suffer most from climate change formed the Climate Vulnerability Forum before Copenhagen COP 15 in 2009. CVF has since come about as an advocacy group and a communication platform. The Climate Vulnerability Monitor documents data and research for communicating new evidence of the adverse impacts of climate change. the first edition of the publication is already an international reference tool. This edition, with its new findings, will surely generate renewed international interest and emphasize the urgency for action.

The Monitor prodives new perspectives to climate change challenges. For example, the nexus between the rise in temperature and the loss of labor productivity and extra energy bills for cooling homes and workplaces. Quantifying these in dollar terms, the Monitor shows a loss of 1% of global GDP, potentially to rise to 3% by 2030. Every year, 4.5 million people die as a direct impact of climate change and use of carbon. Loss of life due to climate change is almost exclusively among the lower-income countries. The gender dimension of climate change cannot also be overemphasized. Further, adaptation costs are rising: what is possible with 100 billion US dollars today, will cost ten times more in 2030.

The impact of climate change on the developing countries, particularly on low-income countries like Bangladesh, is compounded by high population density, low resource base, high incidence of natural disasters, salinity intrusion and submergence of land due to sea level rise. The situation would become disastrous with even a meter rise of sea level due to global warming, as it would inundate a fifth of Bangladesh, displacing nearly thirty million people and leading to mass movement of people. The scenario would be just as horrifying for small island developing states like Maldives, Kiribati, and Tuvalu.

The Report shows an alarming decline in food production in rice, wheat, and maize production due to climate change. This will result in additional price increases threatening food security, particularly in South Asia. For Bangladesh, it means loss of about four million metric tons of food grain, worth around two billion US dollars — that is, about 2% of our GDP. If one adds up all the other damages, our total loss would be 3 to 4% of GDP. Withouth this loss, our GDP growth would have risen 10% — allowing substantial growth in employment and food production, greater resource allocation to health, education, and other priority sectors.

We now have clear evidence that the two-degree Celsius stabilization target is at stake. Technology transfer and funding support are therefore critically important. Our development partners must not backtrack from their commitments. "Climate change support" cannot be confused for "development finance." In COP 15, they promised to provide us "new" and "additional" support beyond the existing development assistance to meet additional costs that we incur due to climate change. Regrettably, we see that the funds are being generated as "fast start finance" are, however, falling far short of this commitment. We are also to see clarity on mobilization of funds or operationalization for climate funds when "fast start finance" ends this year.

Although we are least responsible for causing the climate change disasters, we are still doing all we can to meet the challenge. Costa RIca, Samoa, Ethiopia, and the Maldives have promised to be carbon neutral over the next decade. In Bangladesh, we have mobilized 300 million U.S. dollars in creating our Climate Change Trust Fund. This fund would be used for implementing our adaptation and mitigation programs, including planting trees on 20% of our landmass. Let me affirm that Bangladesh, as a responsible member of the international community, will never exceed the average per capita emission of the developing countries. This is our commitment to a low carbon development path.

We expect such commitments and responsible behavior from those who have contributed most to climate change crisis over decades. It is time for them to act positively in the interest of present and future generations.

In the last two decades we have not been able to conclude an agreement to reduce emissions and to provide adequate support to developing countries to fight impacts of climate change. The last UN climate talks at Durban gave us an opportunity which we now must not miss. We have to conclude a legally-binding document based on "equity" and "common but differentiated responsibilities." This will require the fullest engagement of all countries.

Ladies and gentlemen, we cannot afford to lose heart. In 2009, we established the Climate Vulnerability Forum to give voice to the most climatically vulnerable countries.

I am confident that the current edition of the Monitor would enhance our understanding of climate change challenges, impacts and actions needed. While the climate change challenges are complex and formidable, our response lacks determination. By highlighting the impacts, we are seeking to encourage urgent action. This is what this CVF process and the Monitor intends to accomplish. In that direction, we would call for due understanding, commitment, and contribution from all out partners. This must happen if we are to seek "climate justice" — as a right indivisible!

I am happy that our efforts in creating a predictable and secure funding mechanism for the CVF activities has seen definite progress. Last evening, the CVF multi-donor Trust Fund has taken off here in New York. Let me confirm that Bangladesh would be contributing 100,000 U.S. dollars to the Fund. And I would thus call upon all to step forward in joining the Fund.

With these reflections and observations, let me formally launch the Second Edition of the Climate Vulnerability Monitor.

I thank you all.