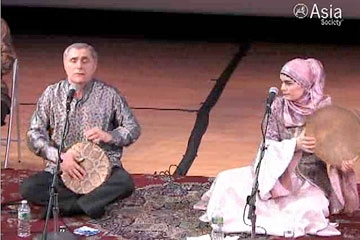 Note: The following remarks are excerpted and adapted from the program notes that accompanied the Alim Qasimov Ensemble's performance at Asia Society New York on March 12, 2010.

Alim Qasimov and his daughter Fargana exemplify the explosive artistic energy that results when a powerful musical model ignites the spark of young talent. "To be a musician, there has to be a fire burning in you," explained the elder Qasimov. "It's either there or it isn't. I'm convinced that if young people have this spark—call it inspiration, call it spiritual fire—they can perform any kind of music. It could be pop, folk, or classical, but whatever it is, they'll stand out."

Fargana Qasimova's talent gravitated naturally toward the music she heard from her father: Azerbaijani classical music, known as mugham, and the repertoire of popular bardic songs sung by ashıqs—singer-songwriters who might be considered modern-day troubadours. Mugham may be performed in a purely instrumental form, but the performance medium most favored among Azerbaijanis is the voice. Vocalists typically perform the lead role in a trio that also includes tar and kamancha as well as a frame drum (daf) played by the vocalist. This trio style of performance provided the starting point for Alim Qasimov's innovative treatment of mugham.

"It was never our aim to sing mugham as a duet in order to reform the tradition," said Alim Qasimov of the sinuous vocal arrangements he performs with Fargana. "Rather, what we do happens spontaneously. We can sing one way in a rehearsal, and then in a concert, it will turn out completely differently. When I meet with the musicians in my ensemble, there's an atmosphere that starts to nourish us which comes from beyond our own will, and that's the source of the unpredictability in our music. It's almost a feeling of ecstasy that leads to a kind of meditation."

"Mugham is an elite art," Qasimov continues. "It's for a select group—for people who have some kind of inner spirituality, who have their own inner world. These days 'elite' refers to something more commercial than spiritual, but that's not what I have in mind. An elite person is one who knows how to experience, how to endure, how to feel, how to listen to mugham and begin to cry. This ability doesn't depend on education, upbringing, or on one's roots. It's something else. It's an elite of feeling, an elite of inspiration. I think there will always be an attraction to this music until the end of humanity."

Alim and Fargana are accompanied by a quartet of young instrumentalists whose formidable skill and talent speak to the vitality of tradition-based music in contemporary Azerbaijan. Rauf Islamov (kamancha) has performed with Alim Qasimov since 1998. He graduated from Baku Conservatory, a lively crossroads of Eastern and Western musical pedagogy and performance, where he studied kamancha with Fahreddin Dadashov. Rafael Asgarov (balaban) performs a range of popular musical styles as well as classical mugham on both balaban and clarinet. Zaki Valiyev (tar) is currently in the second year of his studies at Baku Conservatory, where he is a student of Malik Mansurov, a member of one of Azerbaijan's most distinguished musical families. Javidan Nabiyev is the newest member of the Alim Qasimov Ensemble, and was selected for his great promise as an up-and-coming percussionist. He is currently a first-year student in a music college in Baku.

Tonight’s program is part of Creative Voices of Islam in Asia, and made possible by the Doris Duke Foundation for Islamic Art and the New York State Council on the Arts. Creative Voices of Islam in Asia is a multidisciplinary initiative using arts and culture as a springboard to understand the diversity of Islam as a creative inspiration. Integrated programs provide a platform for myriad voices and perspectives, giving audiences the context for a deeper understanding of Muslim artists and their societies.