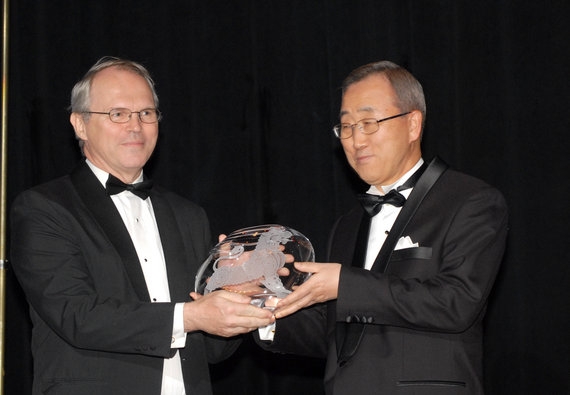 The black tie affair honored UN Secretary-General Ban Ki-moon, Chairman and CEO of the Coca-Cola Company Neville Isdell, and Japanese architect Yoshio Taniguchi. Recipient of a Special Cultural Achievement Award, Taniguchi is best known in the United States as the architect for the expansion of the Museum of Modern Art in New York, and is currently designing a major building project for Asia Society Texas Center, slated for completion in 2009.

The Society also presented a Lifetime Cultural Heritage Award to the internationally acclaimed Iranian vocalist Shahram Nazeri. At the gala, Nazeri performed with his son, Hafez Nazeri, one of Iran's most influential and admired young composers, together with the Rumi Ensemble, a group featuring both Persian and Western classical performers.

Asia Society Chairman Richard C. Holbrooke announced the opening of an Asia Society Korea Center in Seoul in April 2008. The Korea Center will serve as an active gateway for engagement on issues affecting Korea, the Asian-Pacific region, and U.S.-Asia ties.

The Society also announced the 2007 winners of the Goldman Sachs Foundation Youth Prize for Excellence in International Education. Five high school students from across the United States were selected for their in-depth written, audio, or video features that compared how their local community and a community in another country addressed challenges ranging from energy and the environment to hunger and homelessness.