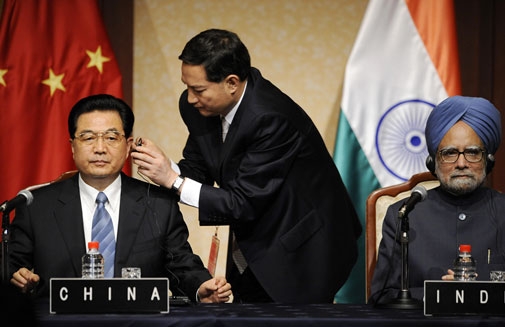 Co-presented by the Aspen Institute

NEW DELHI, July 27, 2009 - The rise of China and India on the global stage makes it imperative to study both countries' leadership models, according to Asia Society President Vishakha N. Desai. In a wide-ranging talk moderated by Ravi Bhoothalingam, Chairman and CEO of Manas Advisory, Desai compared Chinese and Indian leadership styles and explored at length how they differ from both Western models and from each other.

Desai pointed out that the topic under discussion was relevant because of the inevitability of India and China's rise on the global stage. Already there are signs of geopolitical and geo-economic shifts in the world order, and the two countries' leadership models will inform this shift to a large extent. The fact that the global economic crisis isn't being felt as acutely in India or China as it is in the US is further indicative of the coming changes.

Tracing the traditional sources of leadership models, Desai pointed out that one of the biggest difference between Western nations and India and China us the notion of the "self." In Western countries, the Enlightenment and developments in the 19th century helped create a sense of self that is individualistic, and a unit in itself. In India and China, on the other hand, the sense of self is relational, that is, the self is defined in relationship to others. This notion of self also comes up in early Indian and Chinese texts and mythology. In China, a leader leads by example, embodied in the concept of Wu Wei.  This means that a leader does not have to do anything, but simply lead by example. Desai quoted that a ruler who rules by virtue is comparable to a pole star to which other stars pay homage. The Confucian ruler can hence transform people through his moral command. The ruler’s activities are expressions of his moral value systems. She pointed out that the ruler in both India and China is, interestingly, always defined as a "he."

In India, leadership is seen as a duty or "dharma" or obligation towards the people. This was manifest in the battle between the Kauravas and the Pandavas when Krishna advised Arjuna to fight even his cousins and other family members since it was his dharma to fight.

While in China the leader stands apart from the people, in India the leader is of the people, but leading because of duty. Yet in each model, leadership is defined on the basis of the leader’s relation to people around him. The Chinese model of a leader who cannot be seen may be seen by some as more passive, in contrast to the Western model which is engaged and interactive. However, it is possible that much strength lies in that passive style of leadership also.

Desai went on to add that Mao Tse Tung may, however, be considered an exception to the Confucian model of leadership because he looked to break away from the past. The one thing in China many people talk about is the need to not have a charismatic leader. For his part, Hu Jintao tried to bring back the earlier Chinese model of staying grounded with the people, not flying too high, and not showing off.

Desai added that both Mao and Gandhi can, however, be seen to have adapted to given contexts and circumstances.

Next: Corporate leadership and what lies ahead in the 21st century

Because of India’s colonial past, the Indian tendency is to stand up for oneself and defend oneself. China’s revolutionary history, on the contrary, has shaped reactions in a more counter-intuitive way. The reactions are practical, with the idea that what needs to be done must be done.

The corporate leadership styles in both countries also are very different. Studying the speeches delivered by Indian business leaders, Desai argued, it becomes clear that there are traces of nationalism as the leaders often project themselves as speaking for and about the nation, along with a sense of community responsibility (at least rhetorically). This is not reflected in the leadership styles of American business leaders. For example, Jack Welch talks of the 4 e’s: energy, the ability to energize others, the capacity to have an edge and take risks, and the capacity to execute. He also talks about passion, integrity etc., but there is no mention of a sense of responsibility towards the nation or the community.

Desai stressed that both countries need to focus on youth, although she pointed out that Indian youth have the facilities to move in any different worlds because of the varied skill sets they possess.

If, as seems likely, the enlightenment project of the Western world may get supplanted, the question of what will be the new world order, or the new belief system that would replace it, becomes particularly important.

Desai pointed out that as notions of inter-dependency and the drive for sustainability become important, leadership models would require a more relational framework. Thus, there is much in Asian values as embodied in Indian and Chinese leadership styles that will be important in the 21st century.

In the Q&A that followed, many questions were raised about the ways in which the varied leadership style of the US, India, and China would play out in tackling common issues of climate change. Desai responded that if the debate boils down to who is in the right and who is not, it is unlikely to proceed very far. In India, there is tremendous innovation in green technology, and perhaps India needs to leapfrog in this realm as it did with the cellphone revolution. Thus, a third way is required for tackling the problem of climate change. There is a need for leadership models to come together, as different skills sets are needed in different circumstances. In this context, India has an advantage. In the US, however, the self-criticize leadership model that was effective 50 years ago is not nearly so. This debate is not taking place in the US, Desai alleged.

While Desai admitted that the Chinese model was hierarchical, there is concern how it will play out in relation to the outside world. In a sense, the Chinese model is less about the relationships inside, than those with the outside. As China becomes a powerful entity on the world stage, this question will become increasingly important.

One participant questioned the idea of cultural underpinnings defining leadership styles given the rapid change happening in each country. Dr. Desai however disagreed by saying that if one sees value in culture, even if there is cataclysmic change in a country, people will react in certain ways which in turn will inform leadership.

Answering a question about the Buddhist strain that binds India and China,  Desai replied that Buddhism has not had a very great impact on the leadership in China. She quoted Nayan Chanda to the effect that once western powers entered into Asia, the Asian connection between countries was broken. Although the connection has been broken for about 200 years, it can be revived, although it will take much conscious effort and engagement. Desai pointed out that there is a lack of trust between India and China. Trust comes from different levels of engagement. In the US-India-China triangle, it has been found again and again that while the US-India and US-China connection is quite strong, the India-China angle needs to be strengthened.

On a question raised about "Asian values," Desai said she was a bit wary of the phrase herself since it has been mis-used in countries such as Singapore to justify lack of democracy. There is hence need to exercise caution in advocating an essentialist point of view.

On the question of the different personalities of the three countries, and whether this is likely to lead to conflict, Desai observed that it remains to be seen which country will be most responsive to the aspirations and sovereignty of its people. Some see the US as an adolescent which can however adapt to changing circumstances, while others perceive the US as not able to adjust to change. In other words, the external perception of a country’s action can also become as important as the actions itself.

Desai said that while India focuses on the leadership styles of a select few such as Gandhi, other modalities too need to be looked at. At the same time, other factors such as the influence of Islamic culture need to be looked at also, for example that secularism as a tenet was brought to the fore by Akbar. These factors, however, are not mentioned during leadership debates.

Answering a question on what the three countries can learn from each other in terms of leadership styles, Desai said that even on the global stage, India tends to asssume more of a moral obligation on certain issues. The Chinese, on the other hand, are generally reluctant to come out more forcefully. Desai suggested that perhaps Indians need to start listening more and reacting less. American decisiveness and assumption of implementable action are important. She hence stressed that there are different aspects of each country’s leadership that are equally important.

In conclusion, leadership in the multi-cultural 21st century era entails respect for a diversity of approaches within oneself.