The Social Media Path to Chinese

The Chinese language is all over the Internet and some of the most vibrant social media platforms are great teachers’ aids for new students of the language. This plenary will guide teachers and administrators to some of the best Chinese social media out there today. Being sure to include the NCLC audience in the discussion, Veteran journalist and former ChinaFile editor Jonathan Landreth will engage New York-based Chinese-language YouTuber Xiao Ma (Arieh Smith), award-winning Chinese language teacher Ying Jin from Silicon Valley, and Houston-based high school student Negest Tsegaye in a lively conversation. The father of a 14-year-old American girl, Landreth will bring a parent’s concerns into the session. The plenary will also poll NCLC attendees after the session and tabulate the results to offer everybody a Top 10 Chinese Social Media list.

Ms. Ying Jin has more 20 years Chinese language and culture teaching experience in diverse settings, including middle schools, high schools, and colleges in both the U.S. and China.  She is currently a teacher of Mandarin Chinese at the Fremont Union High School District in Cupertino, California.

Ms. Jin has presented many times in conferences, such as ACTFL, CLTA (California Language Teachers Association), and STARTALK. She enjoys interacting with other teachers and promoting world language teaching in the K-12 realm.

Arieh Smith is a popular Chinese-language vlogger with over a million fans in mainland China, Taiwan, Malaysia, and the U.S. Known to his audience as Xiaoma 小马, he spends his days introducing people on the streets of New York City to Chinese culture. His videos can be found on YouTube at 小马在纽约 (xiaomanyc). A longtime student of Chinese since a stint in Beijing in 2009, he now teaches the language on a weekly volunteer basis at a nonprofit in Manhattan.

A former software engineer and hedge fund analyst, he holds a BA in East Asian Languages and Civilizations from the University of Chicago.

Negest Tsegaye is a senior at Houston Academy for International Studies. Negest studied Chinese for two years, went abroad to China, and was the finalist of the #WhySpeakChinese video contest in 2018. She is eighteen years old and was born and raised in Houston, TX. Negest enjoys traveling as she has studied abroad all three years of high school. She will be wrapping up her high school career by graduating with her Associates in Science along with her high school diploma in May 2019.

Jonathan Landreth is a reporter, writer, editor, media strategist and writing coach. Jonathan has committed journalism about relations between China and the United States for more than 20 years, serving as Managing Editor of ChinaFile, Asia Editor of The Hollywood Reporter, and writing widely from Beijing, New York and Los Angeles for The New York Times, The Wall Street Journal, and The Los Angeles Times, often with a focus on the media and entertainment industries. Jonathan is a committed storyteller who enjoys helping others find their own voice. His network of former interns includes budding writers now working at the highest levels of journalism.

Since 2012, he has helped organize the annual Asia Society U.S. China Entertainment Summit in Los Angeles and helped present at several editions of the Asia Society’s annual National Chinese Language Conference. In 2015, he launched China Film Insider, a website devoted to covering the growing ties between China and Hollywood. From 2002-2004, Landreth covered the global oil trade for Reuters from Singapore, and from 2000-2002, he reported for Reuters in New York, covering the health and energy industries, and the attacks of September 11, 2001. In 1999, Jonathan was a Founding Editor at the New York- and Beijing-based website VirtualChina.

Prior to his work as a reporter, he edited non-fiction books at Henry Holt & Company in New York (1993-1998). He holds a B.A. in English Literature from the University of California, Berkeley (’92), and an M.S. from the Columbia University Graduate School of Journalism (’99). A daily meditator and an exuberant fan of the Los Angeles Dodgers baseball team, Jonathan lives in Brooklyn with his daughter, whose passport is impressively packed for a 14-year-old. 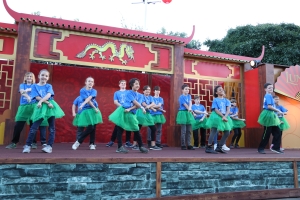