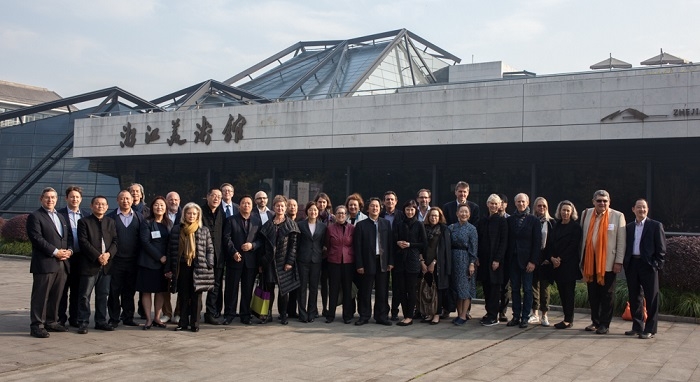 The U.S.-China Museum Leaders Forum is organized by Asia Society's Asia Arts and Museum Network and the Center on U.S.-China Relations’ U.S.-China Forum on the Arts and Culture.

The 2014 U.S.-China Museum Leaders Forum was held in Shanghai and Hangzhou, and was co-organized by Asia Society and the Chinese People’s Association for Friendship with Foreign Countries. The three-day conference brought together twelve American and fourteen Chinese museum leaders, some of whom had also participated in the inaugural 2012 Forum.

The second Forum focused on tangible and actionable projects that museums from each country can execute to promote better collaboration and exchange. In addition, there was a discussion on philanthropy in China and the United States and the evolution of private museums, where high-level museum patrons, entrepreneurs, and arts foundation executives were invited to speak on different funding models and to provide advice and support for the Forum’s projects.

The museum leaders and arts foundation executives noted that before the 2012 Forum, exhibition exchanges between China and the United States already were taking place. However, the majority of these exchanges have been Chinese historical surveys traveling from China to the United States, and rarely, if at all, of modern and contemporary art exhibitions from American institutions to China. In addition, exhibitions of Chinese contemporary art in American museums are usually coordinated directly with artists and not organized through Chinese museums. Differing perceptions of art history and views on museum audiences and what makes for a successful exhibition, as well as the various aims, purposes, and operating modalities of museums in each country, are some of the issues that have resulted in challenges in collaboration and exchange between American and Chinese museums.

The next steps for moving toward realizing tangible initiatives include identifying opportunities and removing obstacles. These opportunities include:

The obstacles that may interfere with these opportunities include:

In conclusion, the museum leaders remain hopeful in their outlook. Ten years from now, China can benefit from a new generation of museum professionals; museums in the United States and China may have many more opportunities for active and equal exchange of ideas and artworks; and both countries may avail themselves of new funding streams. Most participants agreed that the best way to achieve the desired outcomes is to start with smaller projects and to develop relationships over time, in order to make exchanges routine rather than exceptional.