Asia Society at the Movies: From Mao to Mozart — Isaac Stern in China | Asia Society Skip to main content

Asia Society at the Movies: From Mao to Mozart — Isaac Stern in China

A Screening and Conversation 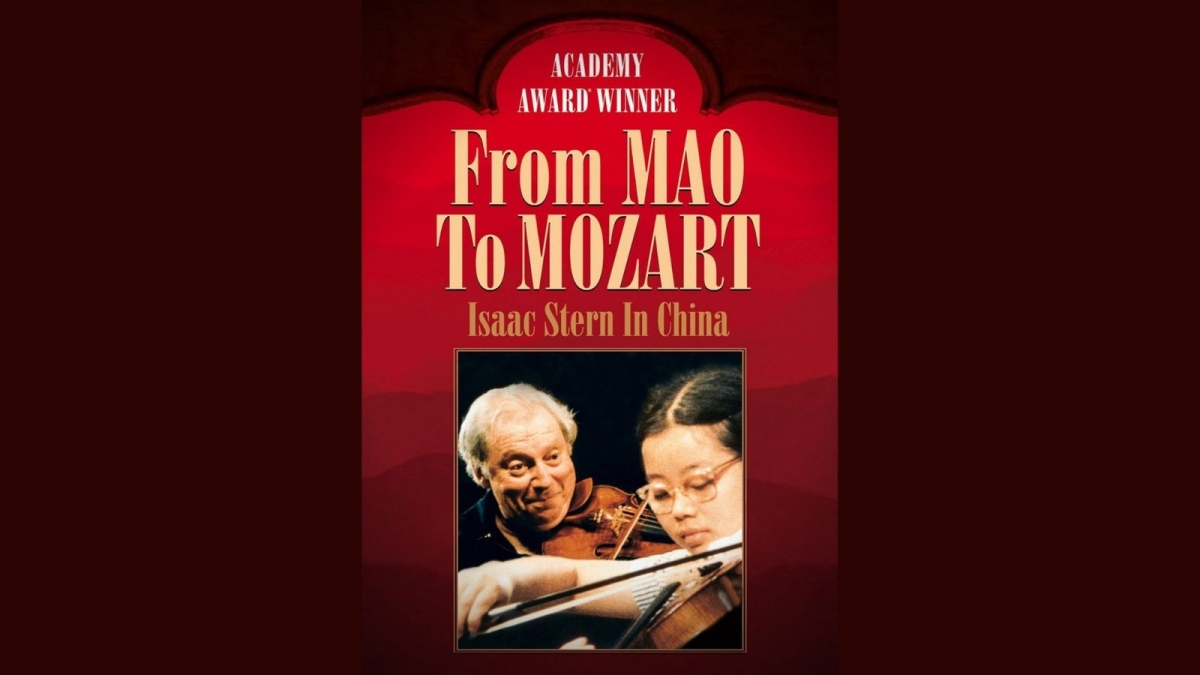 Winner of an Oscar for Best Documentary, From Mao to Mozart: Isaac Stern in China (1979) follows Ukrainian-American violinist Isaac Stern, who in 1979 made an unprecedented tour of China, the first such tour by a western musician in a country still reeling from the effects of the Cultural Revolution. On hand to document the historic event was filmmaker Murray Lerner, who gathered footage of Stern’s encounters with both traditional Chinese musicians and conservatory students versed in Brahms and Mozart — encounters that, only a few years prior, would have been politically controversial.

Join us for a weekend-long screening of From Mao to Mozart along with a conversation that explores the film featuring Isaac Stern’s son David Stern with violinist Tiffany Hu and cellist Jian Wang, both featured musicians in the documentary.

From Mao to Mozart
1981 Oscar winner for Best Documentary

“It is a beautifully made documentary that does not presume to tell all about China or Mr. Stern but does give us a most enjoyable record of a productive visit.” — New York Times

Tiffany Hu grew up in China and studied violin at the renowned Shanghai Conservatory. At age 15, she was chosen by Maestro Isaac Stem to perform for him while he was touring in China, and she was a featured violinist in his Academy Award-winning documentary From Mao to Mozart. She appears on the cover of the film’s DVD release. After receiving her master’s degree from USC, Tiffany established a successful career in the entertainment industry, including the founding of her own corporation, performing solo, chamber music, and symphonic concerts, recording thousands of motion pictures, television shows, commercials, and video games, and working with many well-known movie and TV producers, directors, composers, and musicians throughout Los Angeles and Southern California.

Jian Wang began studying the cello with his father when he was four. While a student at the Shanghai Conservatory, he was featured in the celebrated documentary film From Mao to Mozart: Isaac Stern in China. Mr Stern’s encouragement and support paved the way for him to go to the United States and in 1985 he entered the Yale School of Music under a special program where he studied with the renowned cellist Aldo Parisot. As a soloist, Jian Wang has performed with many of the world’s leading orchestras, including Berlin Philharmonic, Royal Concertgebouw orchestra, New York and Los Angeles Philharmonic, among many others. Jian Wang has made many recordings, his latest releases being the Elgar Cello Concerto with the Sydney Symphony and Vladimir Ashkenazy. His instrument is graciously loaned to him by the family of the late Mr. Sau-Wing Lam.

David Stern’s musical leadership is spread across three continents. Whether conducting a major symphony orchestra, baroque opera, teaching vocal master classes, or defending cultural activities, Stern keeps his musicians, students, and audiences riveted by sharing his strong musical convictions, his flexibility of approach, and his belief that music is relevant and indeed essential in today’s world. He is the founder and director of the Paris-based opera studio and period-instrument ensemble Opera Fuoco, as well as artistic adviser and chief conductor of the Shanghai Baroque Festival and chief conductor of the Palm Beach Opera in Florida.

Online
Mon 07 Jun 2021
8 - 9 p.m.
New York Time
Calculate your local time »
Register Now
Free registration via Eventive
20210607T200000 20210607T210000 America/New_York Asia Society: Asia Society at the Movies: From Mao to Mozart — Isaac Stern in China 'From Mao to Mozart' is an Oscar-winning documentary that follows Ukrainian-American violinist Isaac Stern, who in 1979 made an unprecedented tour of China at a time when the country was still reeling from the Cultural Revolution.

Fri 4 Jun–Mon 7 Jun 2021
Available to stream for 72 hours beginning June 4 at 5 p.m. New York Time, with a 24-hour viewing window once the screening has started.