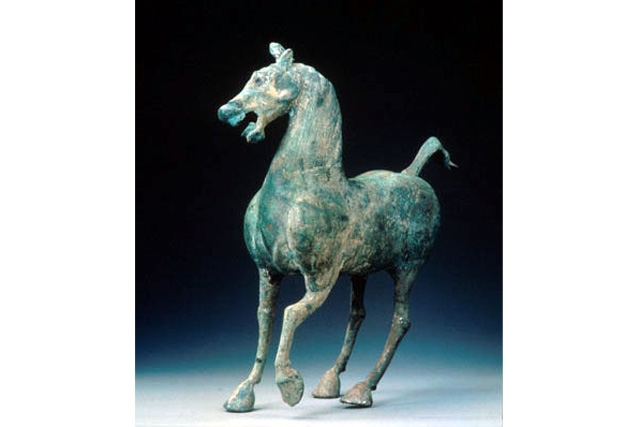 The four hundred years between the collapse of the Han dynasty (206 B.C.E. – C.E. 220) and the establishment of the Tang dynasty (618–906) mark a watershed in the history of China. During this period, foreign invasion, transcontinental trade, and missionary zeal opened the region to an unprecedented wealth of foreign cultural influences. These influences were both secular and sacred, as nomads, merchants, emissaries, and missionaries flooded into China, bringing new customs, purveying exotic wares, and propagating new religious beliefs. Foremost among these was Buddhism, born in India, but which now took root in China. Its influence on China was profound and pervasive, offering a new spirituality to both the elite and the poor, fostering the establishment of innumerable temples, and inspiring the creation of new art forms.

These new influences entered China by a vast network of overland routes, popularly known as the Silk Road, which linked China with western Asia, the Mediterranean, and the Indian subcontinent. Silk was indeed an important merchandise — Chinese silk was in great demand as far west as Rome — but all manner of exotica and luxury goods were traded: glass, precious metals, ceramics, carpets, animals, and foods, immeasurably enriching the material culture China.

The region of Gansu and Ningxia, caught between impassable mountains to the south and inhospitable dessert to the north, formed a corridor through which many of these foreign ideas and artifacts entered China and were transmitted to the metropolitan centers farther east. Monks and Merchants tells the story of the crucial role this region played in the transformation wrought on Chinese civilization by the Silk Road.

The exhibition at the Asia Society focuses on the period between the collapse of the Han dynasty (206 B.C.E.–220 C.E.) and the rise of the Tang dynasty (618–906) and only on the stretch of the road situated within China proper, the area of northwest China that now constitutes the province of Gansu and the Ningxia Hui Autonomous Region.