A Mixed Record on Environmental Progress 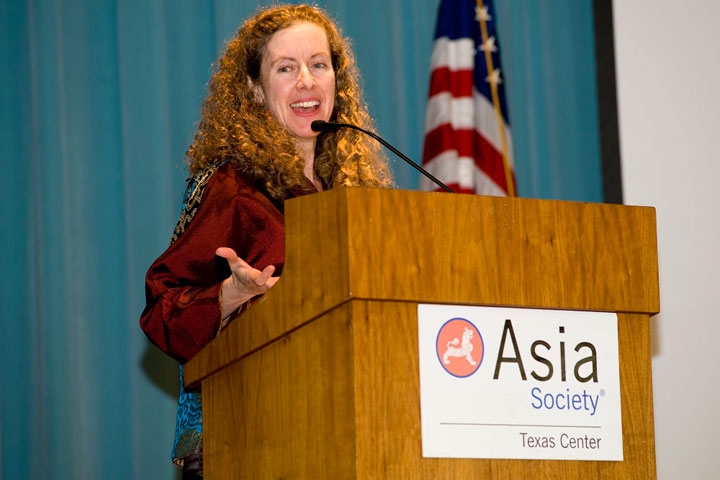 HOUSTON, October 29, 2009 - China’s impact on the environment is a mixed picture, says Dr. Jennifer Turner. While its rapid industrial growth continues to put unsustainable pressure on its neighbors’ natural resources, inside China itself government and nongovernmental organizations are starting to rein in bad practices.

Turner, who heads the China Environment Forum at the Woodrow Wilson International Center for Scholars in Washington, DC, delivered her lively and wide-ranging assessment of China’s ecological footprint as part of the ConocoPhillips Environmental Lecture Series, sponsored by Asia Society Texas Center. About 85 people were on hand for the luncheon talk.

Wilson spent considerable time discussing Southeast Asia, a region she called an economic "Wild West." Weak and corrupt governments there have failed to properly regulate foreign operators—not all of them Chinese—eager to exploit forests, minerals, and cropland, she said. Cambodia, she noted, has the worst deforestation rate in the world.

"Countries that are rich in cash but poor in land are going to Cambodia and Southeast Asia to plant crops for food," she said. "The leader in Cambodia is Kuwait. Last year that Middle East country provided technical assistance and $546 million in soft loans for infrastructure projects in exchange for leasing land."

Other Middle East countries, including Saudi Arabia and the United Arab Emirates, also have big stakes in Southeast Asia, as  does China, a country with a quarter of the world’s population but only 7 percent of its arable land.

"China has leased about 2 million hectares of farmland in Southeast Asia,” Turner said. "This is a trend. 15 percent of the land in Laos is under lease by foreign governments or businesses. These leases can run 70 years or more."

The legacy of these foreign-owned ventures can include polluted waterways, destroyed wildlife habitat, and displaced local populations, she said.

Turner also touched on how China’s increasingly prosperity has led to problems ranging from overfishing to a growing illegal trade in wild animals coveted for their meat or medicinal qualities. "20 to 30 tons of live wild animals are smuggled into China every day,” she said. "This is just a huge market."

But Turner took pains to add that she sees "a lot of potential for positive change both within China and externally."

The Chinese government is beginning to come down hard on polluters, she said. Recently for the first time the government blacklisted polluting coal-fired power plants, making them ineligible for government loans.

"These are very effective tools. They’re just starting to be implemented in China. They’re starting to build up the foundation, but it’s going to take a long time."

Ironically, Turner said, the overharvesting of timber in Southeast Asia results in part from a ban on timber cutting in China itself, a policy instituted after deforestation led to serious flooding. Much of the wood going into paper products that say Made in China actually comes from Southeast Asia or Russian Siberia. Half of that timber is being imported into China illegally, she said.

Turner concluded by praising China’s "green revolution," the hallmarks of which include stronger regulations, better enforcement of existing laws, and new energy-efficiency standards.

"Today, Chinese green groups are really the vanguard of civil society," she said. “They’ve moved from doing a lot of environmental education work to becoming much more hard-hitting.”