Miguel Syjuco: The Stuff of Life 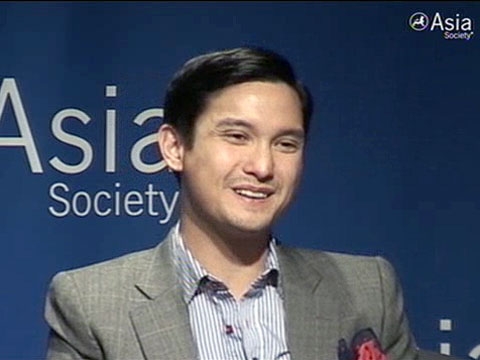 NEW YORK, December 2, 2010 – Miguel Syjuco's debut novel Ilustrado, an inventive, daring novel full of politics, jokes, Philippine history and episodes of daily life, thrust him into the literary spotlight when it won the Man Asian Literary Prize in 2008. Syjuco, a Philippine expatriate, joined his compatriot, writer and scholar Luis H. Francia, at the Asia Society to talk about that experience, and about the far-reaching and complex themes his book addresses (and satirizes).

Ilustrado tells the story of a dead Philippine writer, Crispin Salvador, and his student and friend, Miguel Syjuco. The novel opens with Salvador's dead body floating down the Hudson River. What follows is Miguel Syjuco's frantic search for meaning, interwoven with Salvador's last, unfinished novel through closed drawers, countries and memories. The highly fragmented novel includes excerpts from Salvador's novels and autobiography, interviews, chats, blog entries, text messages, and all the "tools at the disposition of a writer… the stuff of life," as Syjuco put it.

The bits and pieces not only engage the reader, but also help delineate the lives of both characters. Fragmentation also allows all of Syjuco's various themes—which include politics, history, exile, myth, humor, relationships, culture and many more—to exist in the same book without bogging down the narrative.

Despite the weighty themes Ilustrado traffics in, the sense of humor and charm Syjuco displayed during his conversation with Francia are characteristic of the book as well. Ranging across history and literature, the two writers displayed an easy chemistry that made for a fluid, funny conversation. Ilustrado's polemical bent was more than offset by Syjuco's humility; as he said, "I felt that if I am going to take aim at the rich, at the politicians, at the church, the masses, the literati, I felt well, you should take aim at yourself. Michael Jackson said it best, you know? Take a look at the man in the mirror."

Syjuco also spoke freely of his sources of inspiration, ranging from cheesy detective novels, tabloids, and pornography to classical music, Nabokov, and Proust, candidly noting he ripped off Proust's madeleines, replacing them with burgers. "Everything, I think, can be considered ... art. (Each) have their own aesthetic, their rationale and rules .... I wanted to incorporate that into the book."

The humor sprinkled throughout both Syjuco's talk and his novel led to a thoughtful discussion on the role of jokes and humor in Filipino culture. "Underneath jokes there is tragedy, and that says a lot about our culture," Syjuco told his audience.

Despite Ilustrado's unique representation of Philippine culture and its author's expatriate experience, the book addresses universal experiences of history and home, of memories of private and public moments, of nostalgia, loss and laughter, through keen descriptions of specific places and times.