Microfinance: The Next Frontier? | Asia Society Skip to main content

Microfinance: The Next Frontier? 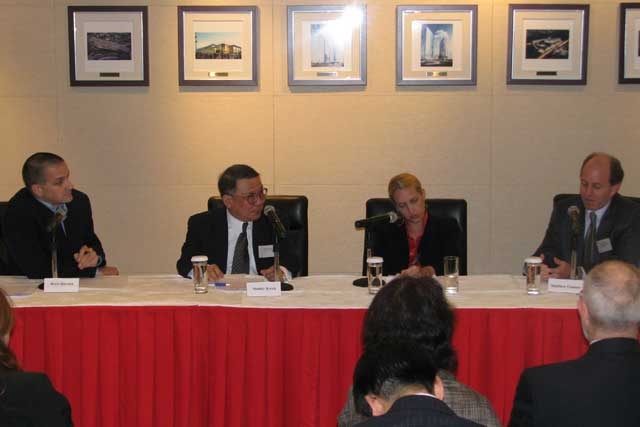 HONG KONG, April 26, 2010 - Microfinance is a powerful tool that can improve the lives of poor people, yet, there are many challenges facing the industry, according to Jennifer Meehan, the Asia Chief Executive of the Grameen Foundation.

Speaking at the Asia Society Hong Kong Center, Meehan pointed out that over three billion people lived below the poverty line of $2.50 a day. "Can microfinance empower the poor? Absolutely," Meehan said. "An illiterate, innumerate person who gets a chunk of capital, what will they do with that? In Inner Mongolia, they will raise goats. In the Philippines, it will be small businesses like hair cuts or nail shops. In northern India, animal husbandry. These are things that people don't need training for. They are skills they already have".

Still, Meehan underscored the challenges facing the sector. "The challenge going forward in terms of the poverty alleviation impact of microfinance is to accelerate the movement," she said. "Once you've tapped basic skills and raised incomes, you plateau again. How do you get it up to the next level?"

Matthew Gamser, a microfinance specialist at the International Finance Corporation, also stressed the importance of the microfinance industry. "What can microfinance mean in a broader sense? It's not just about credit," he said. "It's about money transfers, savings, insurance et cetera. We are now starting to think that if these institutions grow too big, we will need to think of structure, governance and their regulation."

While the development of microfinance in India has been a success, China pales in comparison. "Seventy-five million people in India have access to microfinance. In China it is 100,000," Meehan said. "India is running circles around China."

Gamser predicted, "China is going to be exploding in microfinance soon. It will make some mistakes. There will be spectacular Ponzi schemes. But the learning is so fast in China and regulators are watching carefully and letting good institutions do a little more than they are allowed. ‘We'll watch, you go ahead and once we see progress, we'll change the rules'."

ACCION Microcredit's experience in China highlighted the difficulties plaguing new entrants. As one of two foreign-owned microcredit companies licensed by the Chinese Government its operations are highly restrictive.  Its Chief Executive, Stanley Kwok said "We can only lend, not take. We don't do insurance or credit cards, unlike our operations in the rest of the world."

The dilemma facing the industry, said Meehan, was how microfinance could reach the neediest. "Seventy percent of the poor are in rural areas. But there are challenges like infrastructure. Where can you get cash? There are no police. These challenges are real and make microfinance expensive to deliver relative to the price of financing. This model is not sustainable in the long term. This cannot scale to the size of the problem - three billion people - give or take."

Despite the challenges, Meehan remained upbeat. "We are still trying to tinker and fix some of the pieces of that puzzle, but it actually is possible - that we can make a big dent in poverty."