Micro-Credit and Alleviating Poverty in Bangladesh 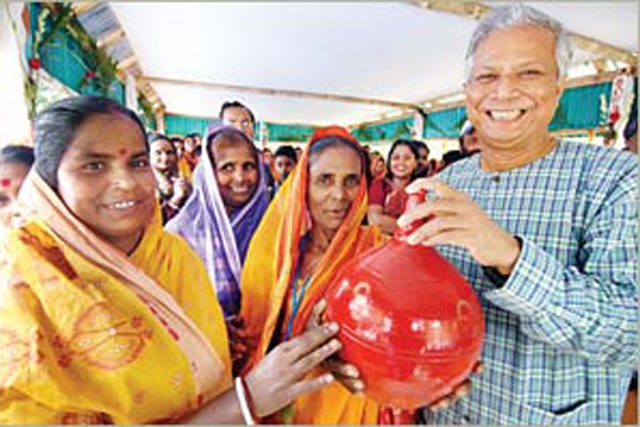 Professor Muhammad Yunus is the managing director and founder of Grameen Bank, which currently operates 1,148 branches providing credit to over 2.4 million poor people residing in 39,857 villages in Bangladesh. Grameen Bank was his creation and he continues to be a strong advocate of micro-credit, arguing that it is only through collateral-free credit, made available in particular to poor women, that poverty can be alleviated.

He started the Grameen Bank Project in 1976 and saw it to its completion in 1983, and still holds the post of managing director in the organization.

In an exclusive interview with Asia Society, Professor Yunus discusses the importance of micro-credit for poverty alleviation in Bangladesh and elsewhere.


Professor Yunus, could you please explain how micro-credit is different from any other kind of money lending?

First, it's addressed to the poor. It doesn't rely on collateral, because collateral is the thing which brings a wall between financial institutions and poor people. It is something that is designed to be friendly to poor people, particularly poor women. Its basic principle is that people should not come to the bank. The bank should go to the people. So it makes it enormously easy for women to do business with someone in the home, rather than going to the office. The office is a threatening institution for a poor person to hang around and try to find a place to get connected.

Also, the repayments are designed in such a way that they are tiny installments. You can pay back your loan over a long period. So all of this together is micro-credit. Small loans for income-generating activity, addressed to the poorest, without collateral.

And who funds micro-credit?

Just like anybody will fund any program. It could be a loan from an institution, or savings from the borrower, or savings from the public. Initially micro-credit programs are usually funded by donors, foundations, governments, or whoever is making grants. Then also soft loans from international organizations. Then if you come to a level that now can handle market loans, then you go to the market loans. Grameen Bank borrows from the market now. They issue bonds, and that gives them the money that they need to carry on with their business. Plus there are savings from the public.

Grameen Bank itself is okay. We can go to the market to borrow. We have decided not to take any soft loan, not to take any grant money at all. We could go there to people who would be willing to give us the money. This is to demonstrate that micro-credit programs can sustain themselves in a commercial way. In the past, we have taken soft loans and grants. But since 1995, we have stopped taking such special kinds of financing.

What kinds of advice would you give to other countries, particularly in South Asia, but in Asia generally as well, who want to replicate your particular model of micro-credit?

Make proper preparation. Many people hear about the idea. It is a very, very simple idea and a very logical thing. So you jump into doing it yourself, without preparing for the techniques of doing it. I would say to take that step. Prepare yourself so that you know the ins and outs of the procedures. That is number one.

Number two is start small. Don't plan for the whole country when you start out. It's a very long process. Start doing it with a few people; ten people, twenty people, and then gather experience to expand to hundreds. Gather experience to tens of thousands. Step by step you go. That is a very safe way to do it. So that, then is another.

Then try to see if you can build a financing arrangement. Because one of the critical factors along the way that you'll face is who will provide you the money when you spend what you have? It takes money to lend money. So I've been talking about the creation of micro-credit funding. A wholesaler fund in each country and each region, and so on is needed so that these tiny grassroots organizations can step into those funds and carry on expanding. It's possible to expand, so that you don't get halted by just not having the money in your hand. So these are the steps I think are very important to take.

You have said elsewhere that you'd like the number of people receiving micro-credit by the year 2005 to be 100 million. Can you comment on that?

It was a goal set by the Micro-credit Summit, which was held in Washington DC in 1997, February. The goal was adopted by the whole summit to reach the 100 million poorest families with micro-credit, preferably through the women of those families, by the year 2005. So that's the number that we talk about.

What do you think the likelihood of that is?

We still believe it can be done. There are hitches. There are glitches here and there because of not having that money coming into the system and not having created those micro-credit wholesaler funds. So even for tiny money, you have to go to the capital of the donor country and negotiate for their staff to come and visit. You spend a lot of money in that. So the money that is allocated to go as loans to the poor women gets spent on studies and visits and conferences and all kinds of other things.

So we have been careful about that. This money was allocated to go to the poor people as loans, not for financing studies and so on and so forth. Studies have been done and you can do it with a small amount of money compared to the total amount of money that would go to the poor women. So these are the things we are trying to resolve. So if the flow of money gets cleared, then reaching that 100 million should not be a problem at all.

You also wrote an article at about the same time, in the LA Times about Third World debt and micro-credit financing. Could you elaborate on that proposal?

So I'm saying you should make it very clear that you are canceling this debt with the condition that this money should be put into a fund called micro-credit Fund; the Wholesaler Fund. Poor people can borrow from this fund. It's in local currency, so the Government doesn't have to worry about finding hard currency. So I think this is a very important part that every kind of discussion on debt should include. Without that, you may be doing more harm than good.

Finally, you have some high-tech plans for Grameen Bank in Bangladesh, using telecommunications, the Internet, etc. Could you just talk about that briefly?

It's not planned. We've already done it. We've started doing it. Grameen Phone is a three-year old company. It's a mobile telephone company. It's the largest mobile telephone company in the country. The interesting thing is that it's a $150 million dollar company today and could expand into being a half-billion dollar company. What we have done is we have brought these mobile phones into the villages. We financed them through Grameen Bank, so that a woman in Grameen Bank can take that phone and start a telephone business by selling the service of the telephone. Today, there are more than 1,400 villages in Bangladesh where there are telephone ladies financed by Grameen Bank, and who sell the service of Grameen Phone and make a lot of money.

It's amazing how much need people have to make telephone calls within the country and outside the country. Our aim is to reach 40,000 villages. Each village has at least one mobile phone to provide the service of the telephone. Technically, we can do that. But there are some problems with government permission and so on. So this is one.

Then the mobile phone itself is changing into Internet terminals. Internet then becomes an easy solution. Now you can bring Internet to those facilities, and bring e-commerce, e-jobs, e-health care services, e-education and whatever you call it. So you have to now think about the content of all of those and also design technology in a friendlier way. We are taking these telephones that were designed not for a rural woman in a poor country, but for a person in a rich country where their needs were considered. So why don't we think about her needs, and design the gadget in a way that she gets 99% of the benefits? So this is done already. I think that information technology can make unprecedented contributions in removing poverty, if we can use it for the benefit of poor people. This would be in terms of creating jobs and creating income situations so that they can sell directly through the Internet, just like anybody else is doing now, and get market information through the Internet and so on.

So we have an Internet company called Grameen Cyber Net. It is the largest Internet Service Provider in Bangladesh. We have Grameen Energy or Shupi, which is the solar energy company, because many of the villages don't have electricity. So even the telephone needs to be recharged, and we need something. So we are putting solar panels in the villages where there is no electricity, so the people can still have mobile phones and do business, and so on.

So we are thinking of putting all of those IT things into demonstration, to make the point that it can be done. It's still a very small thing, with enormous potential.