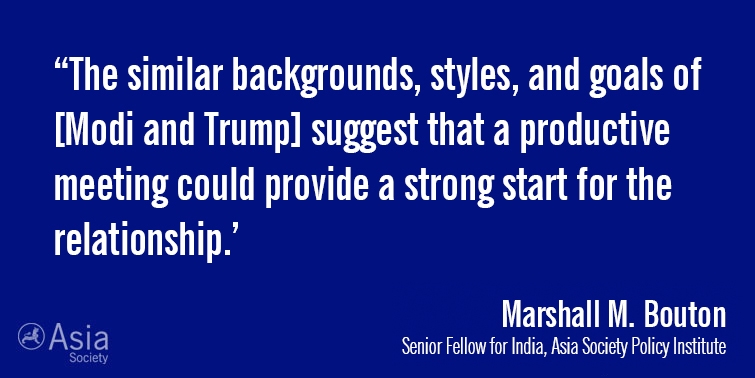 NEW YORK, May 18, 2017 — The U.S. strategic partnership with India provides an opportunity to advance many of the key foreign policy objectives of the Donald Trump administration, according to a new issue paper published by the Asia Society Policy Institute.

“The convergence of U.S. and Indian security interests and policies, together with parallel 'America First' and 'India First' economic policies, holds potential benefits for both nations,” Dr. Marshall M. Bouton, Senior Fellow for India at the Asia Society Policy Institute, writes in the paper.

The issue paper posits that President Trump and Prime Minister Narendra Modi, both highly-nationalist and pro-business, are likely to find common ground. Additionally, “strong bipartisan support in Congress for U.S.-India ties and official optimism in India about relations with the United States under the Trump administration argue for seizing the opportunity decisively.”

The issue paper urges the Trump administration to move rapidly on five fronts:

“Among the major countries that seek the administration’s attention, India stands out for the opportunities it offers to advance U.S. objectives,” Bouton writes. “The two nations’ security interests are increasingly aligned. Their economic interests could be an obstacle to closer partnership but, with careful management and imaginative leadership, could become a new frontier in the relationship.”