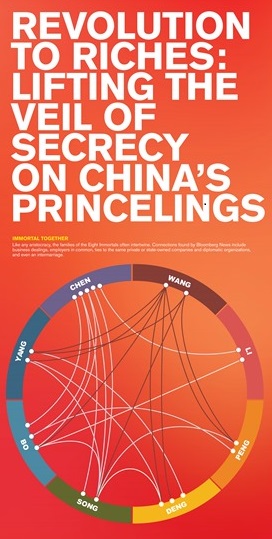 New York, April 9, 2013 — Asia Society is pleased to announce that a team from Bloomberg News has won the 2013 Osborn Elliott Prize for Excellence in Journalism on Asia. The $10,000 cash award, known as the Oz prize, will be  presented at a public program and discussion on May 23, 2013, at 6:00 pm, at Asia Society in New York.

The winning entry, a series of investigative stories titled "Revolution to Riches," exposed the vast wealth accumulated by the families of some of China’s leaders, and documented the interlocking business interests of the country’s elite or “princeling” class.

The independent jury that oversees the prize selection called the Bloomberg News reporting “historic, exceptional, and insightful.” They noted that Bloomberg “beat the pack and led the story” which they called “gripping” and “fascinating.”

“Congratulations to Bloomberg News for winning in a very competitive field,” said Asia Society Executive Vice President Tom Nagorski. “This year marks the tenth year since the inception of the Oz prize. Since that time, the news industry has undergone unimaginable changes. This year’s honorees demonstrate that outstanding reporting on Asia continues to thrive.”

In addition to the Bloomberg News team, the jury made three citations for reporting excellence:

-Umar Cheema, Center for Investigative Reporting in Pakistan, for the “impactful” report "Representation without Taxation" about income tax payments by Pakistani MPs

-Vinod K. Jose, The Caravan, for “courageous reporting…a terrific piece of work,” titled "The Emperor Uncrowned: The Rise of Narendra Modi," a profile of Gujarat’s Chief Minister, and "On the Success of Ethics," about the state of the media industry in India

-Paul Mooney, South China Morning Post, for a “moving” series and “impressive effort” titled "In the Shadows," on the plight of disabled people in China

For more information about the Oz prize, the awards program and discussion, and to read the stories, visit AsiaSociety.org/ozprize.

About the Osborn Elliott Prize for Excellence in Journalism on Asia

The “Oz Prize” honors the late Osborn Elliott, legendary journalist, author and former editor-in-chief of Newsweek. Elliott was a leading figure in the field of journalism who became one of the earliest practitioners of “civic journalism”—the deliberate focusing of the journalistic enterprise on urgent issues of public policy. The Oz Prize is awarded annually for the best example of writtenjournalism about Asia during the calendar year.

Previous winners have included April Rabkin, Fast Company (2012), Keith Bradsher of The New York Times (2010), a team of writers from the International Herald Tribune (2009), Shai Oster of The Wall Street Journal (2008), Evan Osnos of the Chicago Tribune (2007), Barbara Demick of the Los Angeles Times and Matthew McAllester of Newsday (2006), Philip P. Pan of The Washington Post (2005), John Pomfret of The Washington Post (2004) and Elisabeth Rosenthal of The New York Times (2003).

Asia Society is the leading global organization working to strengthen relationships and promote understanding among the people, leaders, and institutions of Asia and the United States. The Society seeks to enhance dialogue, encourage creative expression, and generate new ideas across the fields of arts and culture, policy and business, andeducation. Founded in 1956 by John D. Rockefeller 3rd, Asia Society is a nonpartisan, nonprofit educational institution, with major cultural centers in Hong Kong and Houston, and offices in Los Angeles, Manila, Melbourne, Mumbai, San Francisco, Shanghai, Seoul and Washington, D.C. For more information, visitAsiaSociety.org.