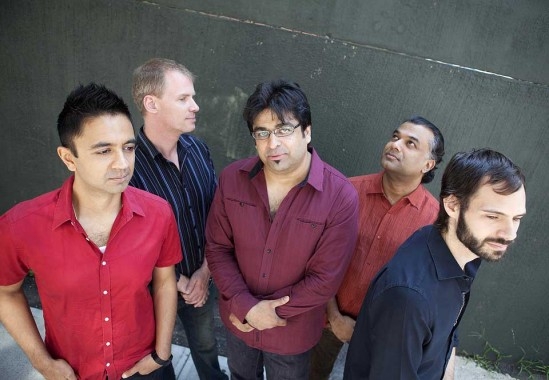 “Neither Eastern nor Western, but effortlessly global … proof that jazz can be as vital and boundary-pushing as ever.”
—All About Jazz

Titled Unfiltered Universe, this is the final installment in a trilogy that puts a jazz lens on the musical traditions of South Asia. Their 2009 debut, Things To Come, employed Hindustani North Indian music and featured Indian vocalist Kiran Ahluwalia. DownBeat magazine chose the album as one of the decade’s best. Suno Suno was released in 2012. Featuring compositions that were influenced by Abbasi’s long time love of Pakistani Qawwali music, it also received many accolades.

Watch a video clip and listen to audio clips of Invocation.

Abbasi is one of the foremost guitar players in modern jazz, and was recently cited as one of the "best guitarists" in DownBeat magazine's International Critics Poll. A product of the Manhattan School of Music, he made a pilgrimage to India early in his career to study with tabla master Ustad Alla Rakha, father of Zakir Hussain. Abbasi — along with Iyer and Mahanthappa — is one of a trio of jazz musicians who are forging distinctly South Asian-inflected voices on the contemporary scene.

These talented composer/musicians have worked together for years, playing in each other's ensembles and building a musical community. Asia Society has a long-term commitment to the creative work of these musicians. Starting with Asia Society’s commissioning of Vijay Iyer’s In What Language (with Mike Ladd) in 2003, and continuing with the commission of Kinsmen in 2006, Asia Society has presented ensembles lead by these three artists over the ensuing decade.

The mission of Invocation’s music, Abbasi declares, is “to create a global-based music steeped in jazz. This tradition follows in the footsteps of some of the greatest jazz musicians. Coltrane, Ellington, and Gillespie all immersed themselves in music from around the world.”

This performance of Rez Abbasi's Invocation, presented in collaboration with Duke Performances and Walker Art Center, is supported by the Presenter Consortium for Jazz, a program of Chamber Music America funded through the generosity of the Doris Duke Charitable Foundation.