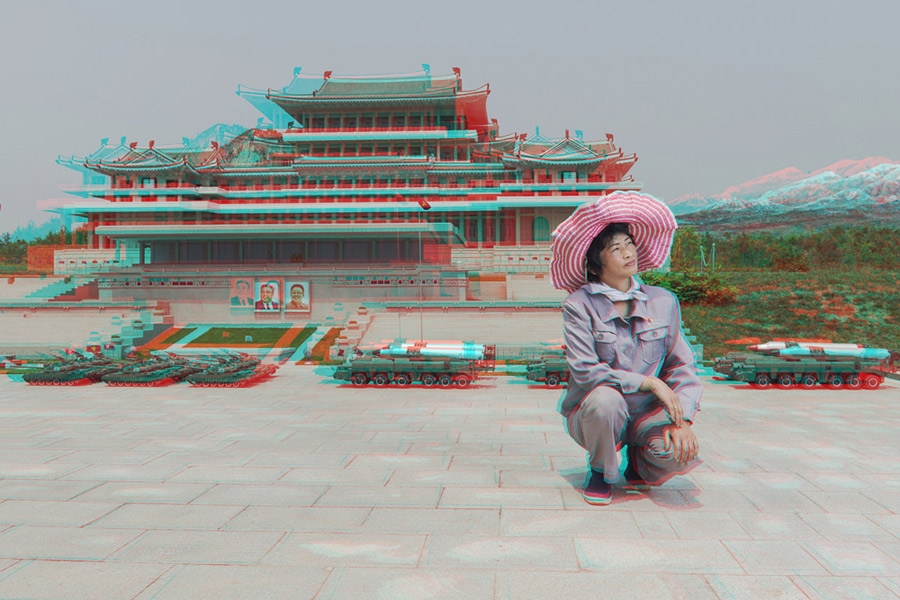 HOUSTON, TX, August 31, 2016 — Asia Society Texas Center is pleased to announce its upcoming exhibition, "3DPRK: North Korean Portraits by Matjaž Tančič," which presents a unique glimpse into a completely foreign environment for most Houstonians. The featured 3D photographs are the result of a 2014 project by Beijing-based Slovenian photographer Matjaž Tančič (b. 1982) with support from Koryo Studio, which specializes in North Korean art. The exhibition will be on view in the Center’s Fayez Sarofim Grand Hall from September 3, 2016 to February 26, 2017, and will require visitors to wear 3D glasses to view the photographs.

The Democratic People’s Republic of Korea (DPRK), commonly referred to as North Korea, is one of the most restrictive nations regarding foreign visitors and artists. All visitors must be invited, and all are required to travel with official guides. Foreign press and picture taking is controlled, and there is an inherent distrust of foreign photographers. Tančič and his small team spent 10 days traveling extensively throughout the country. He relates: “It was like time travel. When you land in North Korea, it’s like you just emerged from a time capsule. Everything is as it was in the 1950s or ’60s. The only reminder that you’re in the present are cell phones, and when you’re walking in your ‘60s-style hotel room, there’s a plasma TV on the wall.”

Tančič works in 3D, a technique that requires patience and understanding from the subject, standing motionless while multiple photographs are captured to cover the requisite perspectives. Persuading people not disposed to prolonging the photo-taking process in public spaces was no small task. Out of the frame of each picture was a supporting cast of producers, translators, and guides describing the technique, explaining the intent, collecting information, and working to ease tensions.

To the naked eye, the subjects and their background are slightly blurry and distorted. When viewed with 3D glasses, however, the photographs are sharp and the audience feels almost immersed in the scene. "Every time you hear about North Korea, it is propaganda or anti-propaganda, workers in the fields or military marches,” said Tančič in a 2014 interview with CNN. “I wanted to show the complete opposite. I wanted to shoot real people, individuals with a name, a face.”

“Matjaž’s photographs capture the essence of Asia Society’s mission by forging new understanding for our audience about North Korea and the individuals who live there. We are thrilled to bring his unique 3D stereoscopic photographs to Houston, and challenge our visitors to engage with different perspectives on North Korea,” says Bridget Bray, the organization’s Nancy C. Allen Curator and Director of Exhibitions.

About Matjaž Tančič
Matjaž Tančič (1982) is a Slovenian photographer who is based in Beijing, and is a graduate of the London College of Fashion. Tančič has had numerous solo exhibitions, and his commercial work has been featured in magazines such as Vogue, Marie Claire, L’Officiel, and Playboy.

About Asia Society Texas Center
With 12 locations throughout the world, Asia Society is the leading educational organization promoting mutual understanding and strengthening partnerships among the peoples, leaders, and institutions of Asia and the west. Asia Society Texas Center executes the global mission with a local focus, enriching and engaging the vast diversity of Houston through innovative, relevant programs in arts and culture, business and policy, education, and community outreach. Visit us at www.AsiaSociety.org/Texas.