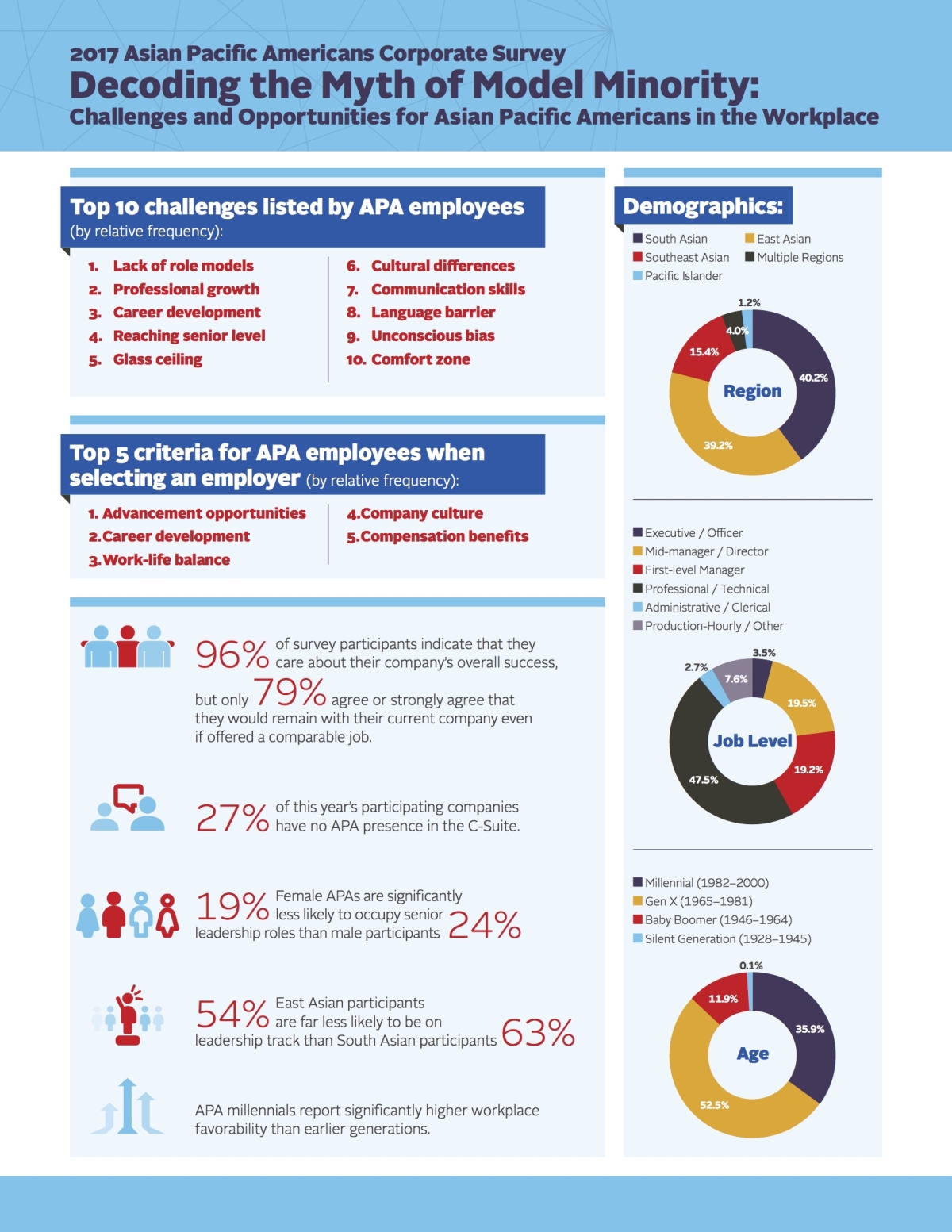 NEW YORK, May 25, 2017 — According to an annual survey of more than 2,800 Asian and Asian Pacific American (APA) employees at Fortune 500 and other large U.S. companies, East Asian employees are far less likely to occupy senior leadership roles (17%) than South Asians (29%).

Asia Society’s 2017 Asian Pacific Americans Corporate Survey found that participants who identify as East Asian are similarly less likely to be on their employer’s leadership track (54%) than South Asians (64%). The survey suggests this gap may be caused by cultural differences between the two groups, with East Asians less likely to push for a promotion or raise.

East Asians are also significantly less likely to report a sense of belonging, less willing to remain in the company even when offered a comparable job, and less likely to recommend their company to other APAs. The relative dissatisfaction experienced by East Asians may be partly caused by the scarcity of East Asian senior leaders and role models. Compared to South Asian participants, East Asian participants were significantly more likely to report a shortage of roles models, and a lack of APA executives and board members in their companies.

“‘Asian’ and ‘Asian American’ are immensely broad labels,” said David Whitelaw Reid, Executive Director of Global Talent Initiatives at Asia Society. “The results of this survey show that employers should be aware of cultural differences among subgroups of APA employees.”

The survey also found evidence of a less pronounced but similar divide between APA men and women, despite there being no significant difference in education level between the two groups. APA women were significantly less likely to occupy senior leadership roles (19%) than male counterparts (24%). Moreover, they were significantly less likely to be on leadership track (56%) than male participants (61%).

One respondent noted that “as an Asian American and female, there is a double bind that is felt for this community. If overly vocal, Asian women immediately get called out for being aggressive and non-Asian like.”

The survey asked all respondents to identify the challenges they face in the workplace. The most frequently cited challenges were 1) lack of role models; 2) lack of professional growth; 3) lack of career development; 4) lack of opportunities to reach senior levels; and 5) the presence of a “bamboo ceiling.”

Employers would do well to pay attention to these responses. While 96 percent of APA respondents indicate they care about their company’s overall success, a surprising 21 percent stated that they would not remain with their current company if offered a comparable job elsewhere.

The Asian Pacific Americans Corporate Survey is developed in consultation with Asia Society’s Global Talent and Diversity Council, which is comprised of more than 20 diversity leaders from Fortune 500 companies. It includes direct responses from APA employees as well as Diversity & Inclusion/HR departments.

This press release is also available in Chinese, Korean, and Vietnamese.