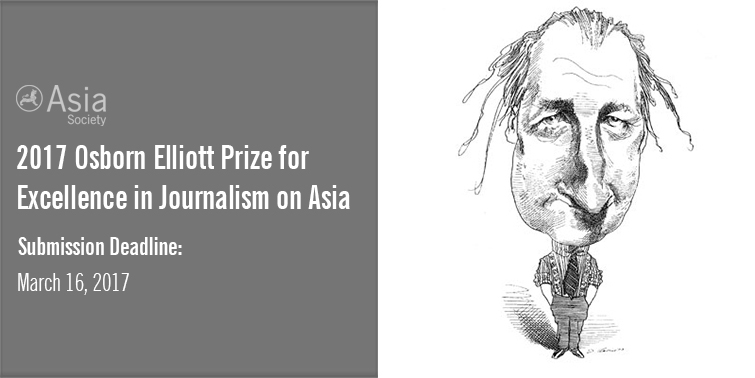 NEW YORK, February 6, 2017— Asia Society is currently seeking applications for the Osborn Elliott Prize for Excellence in Journalism on Asia. The $10,000 prize is awarded annually to a reporter or team of reporters who has produced the best example of journalism about Asia during the calendar year. Evaluation criteria include impact of the work, its originality, creativity, depth of research and educational value in informing the public about Asia. Asia Society encourages submissions from individual reporters, and from outlets based in Asia.

The Osborn Elliott Prize for Excellence in Journalism on Asia honors the late Osborn Elliott, a legendary journalist and former editor-in-chief of Newsweek. Elliott set new standards for reporting and editing, and became one of the earliest practitioners of “civic journalism,” the deliberate focusing of the journalistic enterprise on urgent issues of public policy.

Last year, Sudarsan Raghavan of the Washington Post, received the "Oz Prize" for a landmark, year-long series of articles on Afghanistan that included investigative, profile, analysis and frontline reporting. Recent winners also include teams from Bloomberg (2015), for a series chronicling the dire health consequences of uranium and coal mining in India, and Reuters (2014), for a series on the “dirty war” against the Rohingya people of Myanmar.

The next winner of the "Oz Prize" will be honored at a special program at Asia Society in New York City in May 2017.

All submissions must be complete and received by March 16, 2017 (11:59PM ET). Please submit any questions to pr@asiasociety.org.