Maziar Bahari: 'Then They Came for Me' (Excerpt) | Asia Society Skip to main content

Maziar Bahari: 'Then They Came for Me' (Excerpt) 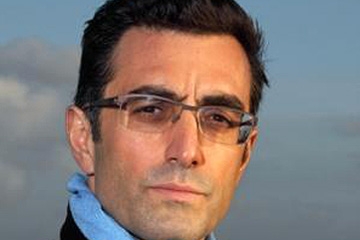 Excerpted from Then They Came for Me by Maziar Bahari with Aimee Molloy. Maziar Bahari appears at Asia Society New York on June 7, 2011.

I could smell him before I saw him. His scent was a mixture of sweat and rosewater, and it reminded me of my youth.

When I was six years old, I would often accompany my aunts to a shrine in the holy city of Qom. It was customary to remove your shoes before entering the shrine, and the servants of the shrine would sprinkle rosewater everywhere, to mask the odor of perspiration and leather.

The morning in June 2009, when they came for me, I was in the delicate space between sleep and wakefulness, taking in his scent. I didn't realize that I was a man of 42 in my bedroom in Tehran; I thought, instead, that I was six years old again, and back in that shrine with my aunts.

"Mazi jaan, wake up," my mother said. "There are four gentlemen here. They say they are from the prosecutors' office. They want to take you away." I opened my eyes. It was a few minutes before 8 a.m., and my mother was standing beside my bed-her small 83-year-old frame protecting me from the four men behind her. I sleep without clothes, and in my half-awake state, my first thought wasn't that I was in danger, but that I was naked in a shrine. I felt ashamed and reached down to make sure the sheets were covering my body.

Mr. Rosewater was standing directly behind my mother. I would later come to learn a lot about him.

He was thirty-two years old and had gained a master's degree in political science from Tehran University. While at university, he had joined the Revolutionary Guards — a vast and increasingly powerful fundamentalist military conglomerate formed in the wake of the Iranian revolution in 1979. I would come to know that his punches were the hardest when he felt stupid. But when he barged into my bedroom early that first morning, the only thing I understood about him was that he was in charge, and that he had a very large head. It was alarmingly big, like the rest of his body. He was at least 6"2', and fat, with thick glasses. Later, his glasses would confuse me. I had associated glasses with professors, intellectuals. Not torturers.

I wrapped the sheet tightly around my body and sat up. "Put some clothes on," Rosewater said, motioning to the three men behind him to leave the room so that I could get dressed. I found comfort in this: by the fact that whatever their reason was for barging into my house, he was still respectful, still behaving with a modicum of courtesy.

They kept the door slightly ajar, and I walked to my closet. Things were beginning to come into clearer focus, but his rosewater scent lingered and my thoughts, still confused, remained back in the past, at the shrine. What does one wear in a shrine? What's the best way to present oneself? I had just finished putting on a blue collared shirt and a pair of jeans when the men barged back into my room: Rosewater and another man, who wore a shiny silver sports jacket and a cap.

They circled the room, surveying everything. I had been spending most of my time over the last two years with my fiancée, Paola, in London. We had got engaged six months earlier, and been preparing for our wedding and the birth of our child in four months time, and I had never really settled in at my mother's house. I could sense their frustration as they took stock of the mess in my small room. Heaps of books sat on the floor beside stacks of videos and DVDs and an untidy pile of laundry. I had not organized my desk for months, and it was covered with old newspapers, notebooks and videotapes. All journalists working in Iran have to be accredited by Ershad, shorthand for the Ministry of Culture and Islamic Guidance and I had given my mother's address as my place of work. They thought they were going to find an office at my mother's house. Instead, they were picking through piles of underwear.

"If you want, I can organize things and you can come back tomorrow," I said with a sorry smile.

"Zerto pert nakon, stop talking shit," Rosewater said sharply. "Sit down and shut up. One more word, and I'll beat you so badly, I'll make your mother mourn for you." He scratched his side under his jacket, revealing the gun strapped to his body. I sat down, feeling my body grow heavy with fear. I, like most Iranians, knew of far too many people — writers, reformists, activists — who had been woken up like this, and then taken somewhere and murdered. I thought of my father, my sister, each arrested and imprisoned by previous regimes, I thought of my mother, who had been forced to live through all this twice before. I could hear my mother's voice in the kitchen, and my fear was joined by an overwhelming sense of guilt. How could my mother go through this again? Why hadn't I been more careful? Why hadn't I left Iran sooner.

"Would you like some tea?" I heard her ask one of the men in the kitchen.

"Why not? It seems that you are going to be here for a while. You should have some tea," she said.

I heard my mother laugh. "You arrived at my house at 8 a.m. You are going through my son's personal belongings. I am going to have to put everything back in order after you leave. What do you mean you do not want to impose?"

The man ignored the question. "Madam, please put on your scarf," he said.

Though I could not see my mother's face, I could imagine the condescending look she was giving him at that moment.

My mother's unveiled hair was illegal under Islamic law. I knew her obeying of the Revolutionary Guards' order half-heartedly, was her attempt at defiance. She was telling them that while they may be able to control her body, they could never control her mind. The Guards rightly thought of my mother and me as parts of "the other Iran," a nation who did not want to be the subjects of an Islamic ruler, and wanted to live in a democracy.

My mother's name is Molook. Growing up, we called her Molook joon, which in Persian, means dear Molook. Because my older brother, Babak, couldn't pronounce the K, he called her Moloojoon. The name stuck, and it is this name I used as I called out to her, doing my best to keep my voice from trembling. "Please. Don't argue with them."

I heard her quick steps, and a few moments later, she walked by my room, a blue floral scarf covering just half of her hair.

"Fine," I heard her say with polite disdain.

My room had a large book shelf full of Western novels and music, with books signed by prominent Iranian reformists on one side and HBO DVD box sets and copies of Vanity Fair, The New Yorker and Newsweek stacked sloppily on the other. It was surely foreign territory to Rosewater. He continued to thumb through my papers and books, despite the look of obvious bewilderment on his face.

I sat on the bed watching him until, a while later, Rosewater told me I could go to the kitchen and eat breakfast while they continued to search my room. In the kitchen, my mother poured me a cup of tea and placed a few dates on a small china saucer. She then took a seat across from me at the breakfast table, and silently pushed the dates towards me. "Bokhor, have some," she said, smiling and hoping, I knew, to assure me that I would find the strength to survive this ordeal, whatever was to come.

I was humbled by her courage but it didn't surprise me. My mother's strength has been a source of inspiration throughout my life. But I felt guilty as I thought about how painful it would be for her to watch yet another member of her family being carted away to prison for defying an Iranian regime.