Maxine Hong Kingston on the 'Broad Margin' of Her Life

Asian American icon reflects on her life and legacy 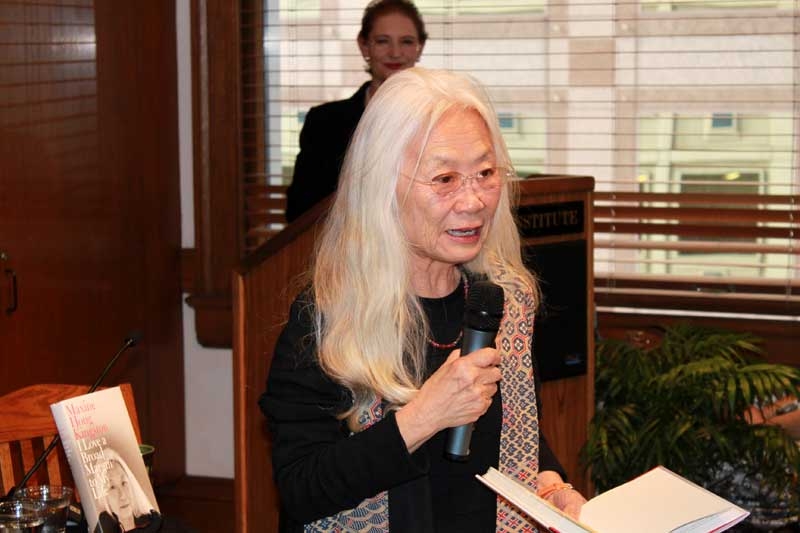 SAN FRANCISCO, April 21, 2011 – Maxine Hong Kingston, the Chinese-American author of The Woman Warrior and China Men, spoke with Andrew Lam at the Mechanics' Institute about her new book, I Love a Broad Margin to My Life.

Kingston has suggested that this will be her final original work, and much of the evening took on a valedictory air as she reflected on her legacy. When Lam asked her what she thought her impact had been on other Asian American writers, Kingston said, "I can see my effect on the writings of people who've come after me. I see the wrestling with the same struggles."

The title of the book is a quotation from Thoreau's Walden which Kingston said she keeps hung over her desk. Like Thoreau, who once refused to pay taxes to support the Mexican-American war, Kingston is concerned with the value of civil disobedience. After she was arrested in a 2003 demonstration against the war in Iraq, Kingston said she questioned the value of nonviolent action.

In her new book she has an answer to this question of meaning, one so tentative that she puts it in parentheses: "an act of love I do this morning saves a life on a far future battlefield. And the surprising love I feel that saves my life comes from a person whose soul, somehow corresponding with my soul, doing me a good deed one thousand years ago."

After she finishes promoting Margin, Kingston plans to put together a work that pays tribute to her father, who came to the US as an undocumented immigrant.

"When I published The Woman Warrior and China Men and he read them in the Chinese editions, he wrote in the margins of my books — he wrote poems, he wrote answers," she said. "I'm hoping to translate all his poems. Which is going to be really hard. I'm going to have to learn Chinese, the hardest language on earth."