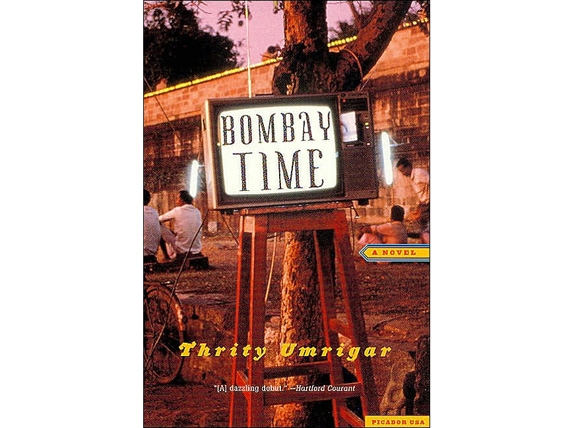 Thrity Umrigar is the author of Bombay Time (Picador/ St. Martin's Press, 2002), a novel that artfully traces ambition and disappointment in the lives of several inhabitants of a Parsi neighborhood in Bombay.

The Washington Post Book World has said the novelist has "an impressive talent for conceiving multidimensional, sympathetic characters with life-like emotional quandaries and psychological stumbling blocks." A journalist by training, Umrigar writes for the Beacon Journal in Akron, Ohio and is a recipient of the prestigious Neiman Fellowship at Harvard. Her work has appeared in the Washington Post and she is a frequent contributor to the Boston Globe. Asia Society spoke with the author about her literary influences, India's middle class, and the emotional impact of the brain drain.

How has being a journalist colored your fiction? After paying meticulous detail to facts and sources, do you find it liberating to be able to make characters up?

After years of being a journalist -- and being confined by facts and what other people say to me -- it's been very liberating writing fiction, where the only limits are those of the imagination. Still, I think journalism is a great apprenticeship for becoming a novelist because of the discipline to write daily that it imposes on you. Also, it has taught me to pay attention to details, to listen closely to people's patterns of speech, etc.

Have you always written fiction?

I started writing poetry when I was a young child and then made my way to short stories and plays as a teenager. In a sense, I was writing fiction long before I became a professional journalist. To me, all these different genres feed into each other, just like different rivers feed into the same ocean.

Who are your literary influences?

Those have changed over the years. When I was a teenager, I was influenced by the usual suspects: Hemingway, Steinbeck, Faulkner, etc. I loved Fitzgerald's delicacy of language and Virginia Woolf's exploration of human psychology. Today, I'm very fond of the writings of Toni Morrison and Jamaica Kincaid. I will always owe a debt to Salman Rushdie for making the Bombay that I knew and loved come alive on the pages of a book and for introducing me to the possibility of writing in that wonderful, oddball 'dialect' known as Indian-English.

Why do you think Indian fiction has been so successful in the US in the past few years? Have you been inspired by the success of other Indian writers?

I think Indian fiction has been successful for the simple reason that we have a damn good story to tell. India is a fascinating country, full of dramas and melodramas and pathos and passion and tragedies and comedies. To me, a city like Bombay is larger-than-life and almost operatic in its sweep. There are stories everywhere in a place like that and we are lucky to live in a time when there is finally an interest in hearing these stories.

One of the common threads tying together recent Indian fiction in English is the virtual obsession with the Indian middle class. We either don't see the poverty-stricken masses (as in Salman Rushdie), or when we do see them (as in the works of authors like Arundhati Roy and Manil Suri), we see them undoubtedly through the eyes of the middle class. Do you think this is an accurate assessment and if so, why do you think the voices of the less advantaged are being ignored? Were you aware of your perspective as a middle-class Indian while writing this novel?

I think your observation is right on the money. It's something I've thought about a lot also. I keep waiting for a new voice to emerge from India's working class. I wish there were more translations of Indian novels being written in regional languages, languages other than English. I think that would perhaps be one way to get a non-middle-class perspective. But the sorry fact is that Indians who write in English are more likely to hail from the middle-class and are the ones who have migrated to the West, so it's a catch-22. But I do think that in order to listen to all the stories coming out of the subcontinent, in order to gain a true picture of this large, complex, bursting-at-the-seams nation, other voices and other perspectives will need to be heard.

While writing Bombay Time, I was acutely aware that mine was a middle-class voice, but I decided to make that work for me by making most of my characters solidly middle-class and exploring their unease and distrust of a city that they fear is unraveling into squalor and poverty. And then, in the final chapters, I tried to indicate how their middle-class values inevitably put them in conflict with the other inhabitants of the city.

In Bombay Time, the characters have a love/hate relationship with Bombay and India in general. Do you think this ambivalence is typical of the Indian middle class?

I think that ambivalence is very typical of the Indian middle class, although it may be a little bit more pronounced in the Parsi community. There is a segment within this community that has never quite reconciled to thinking of itself as 100 percent Indian and that adds to their ambivalence about the city. I suppose that any ethnic minority has a complicated -- even contradictory -- relationship with the city/country in which it dwells.

Your characters also seem ambivalent about India's brain drain and the success of Indians abroad. Given that you have migrated to the US, did this issue strike a powerful chord with you?

I think one thing that always strikes me about India is that even middle-class folks, that is, people with no immediate economic distress, seem so melancholy and burdened. You compare that to a place like the US, where people seem content and happy with their lives, where there is a sense, whether justified or illusionary, of being in charge of their own destinies.

I think that the 'price' that successful Indians pay is that very often their children leave for the West. I tried to imagine the hollow sense of loss that that would produce in those left behind. I'm sure that my own nascent guilt about migrating to the US has helped me imagine how my family must have felt in the wake of my leaving.

Did you grow up in Bombay's Parsi community? How has the experience of being a minority within a minority (that is, an Indian American Parsi) influenced your work?

That's a great question. The funny part is, I never really felt like a minority in Bombay, except for one or two occasions where i was made to feel that way. That was the joy of growing up in Bombay in the '60s and '70s. We prided ourselves on being progressive, secular people who didn't give in to any of the religious and communal bigotries that were consuming the rest of the nation.

But today, I'm much more aware of what a cocoon I lived in. I do think that growing up as a Parsi has made me acutely aware of this insider-outsider status that is the mark of all minorities. Today, I embrace that because as a writer, it is important to have a critical distance from your subject matter, to be able to stand on the margins of society and examine the dominant culture.

One of the major motifs in the book seems to be dreams deferred. Dosa's character in particular is bitter about lost opportunities, but almost all of the older characters are tied up in a web of sacrifice, failure, and disappointment that impacts their expectations for and relationships with their children. Why was this an important theme for you to explore?

As I mentioned earlier, I'm so struck by this sense of unhappiness and loss and defeatism that seems to dog the lives of so many of the people I knew growing up. I guess my novel was an attempt to make sense of their lives, to tell the people that I love that their lives were not wasted, to transform the mundaneness and the private defeats of their lives into art and then hand it back to them.