Landscape of Memory: The Art of Mu Xin 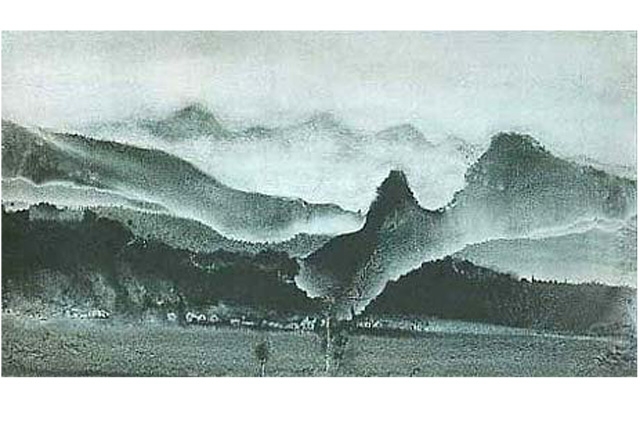 The work of Mu Xin (b. 1927), is, in part, a dialogue with the past masters of Chinese painting and, thus, with Chinese history in general. This dialogue is a key factor in connecting Mu Xin with the continuous tradition of Chinese landscape painting, begun in the 10th century, which is embedded with meanings both personal and profound. Emerging from his knowledge and interpretation of past masters, Mu Xin created paintings that responded to the past while criticizing the future. Although in this regard Mu Xin could be compared with many Chinese artists, perhaps the greatest connection can be made with the “yimin” painters of the early Yuan period (1279 – 1368) and of the early Qing (1644 – 1911).

The yimin painters, approximately translated to “leftover people,” worked in the wake of drastic upheaval and historical change (similar to the post-Cultural Revolution China of the late 1970s, when Mu Xin’s “Tower within a Tower” paintings were created—the series that comprises the exhibition at the Asia Society Museum). These members of the Chinese literati withdrew from politics and society in order to seek personal betterment through the creation of literary works and “silent poetry,” their name for painting. They gave their lives meaning, as well as subversively criticized the present, by creating paintings that celebrated the virtues of the past. Although addressing issues on a grand scale, the images were still embedded with a deep sense of personal memory, creating a sense of loss of the idealized past. It is this tradition of the Chinese literati that Mu Xin refers to as his “blood roots.”

Mu Xin further expressed this connection to his blood roots in the naming of many of his paintings. The titles often include references to important people and places in Chinese history and, thus, the events surrounding them. Some references, such as in the title Reciting a Tang Poem on the Road to Shu are quite direct. For those familiar with Chinese history, the name instantly conjures up the tale of the death, in 755, of Emperor Minghuang’s (Xuanzong, r.712 – 756) concubine Yang Guifei and the near-destruction of the Tang dynasty by An Lushan.

Other references are more subtle, such as many of those made to the Wei and Jin dynasties of the Six Dynasties period. The Wei and Jin dynasties ruled parts of Southern China in the turmoil-filled years of 220 to 419. It was a time, however, in which many of the great masters and cultural heroes, such as the poet Xie Lingyun (385 – 433) and the painter Gu Kaizhi (345 – 406), lived and worked. They established a Chinese elite humanistic tradition and are associated with an especially high level of culture and civilization. An example of this reference can be seen in Spring Brilliance at Kuaiji, which alludes to Wang Xizhi’s, “Preface to the Orchard Pavilion,” considered by some to be the greatest calligraphic work of all time. The connection lies in the fact that Wang Xizhi created the “Preface” at Shanyin in Kuanji in 353 and that the Orchard Pavilion takes place in the spring.

There are, also, many references to areas in the southeastern Zhejiang province, such as the Yellow Mountains and the West Lake. Mu Xin was born in this area and the references could relate to his childhood, but it seems likely that they also serve to reference the traditional masters and imagery, since these were the areas the masters were known for painting. Few of these faded images, however, would be recognizable without their titles.

What is unique to Mu Xin is that, in contrast to the traditionally glorious images of the past, his images seem to present a past that is wasting away and becoming forgotten. In the words of the art historian Richard Barnhardt, the images seem to suggest that “everything that represents the great tradition of landscape painting in China for the past thousand years is in the final stages of a long illness.” The lack of the typical sages and pavilions further this suggestion (though the homes of peasants dot the landscape). Despite Mu Xin’s suggestion of loss, through it all there seems to shine the light of the soul or of hope.

The exhibition is co-organized and circulated by the David and Alfred Smart Museum of Art, University of Chicago, and Yale University Art Gallery.

View more images from Landscape of Memory: The Art of Mu Xin.