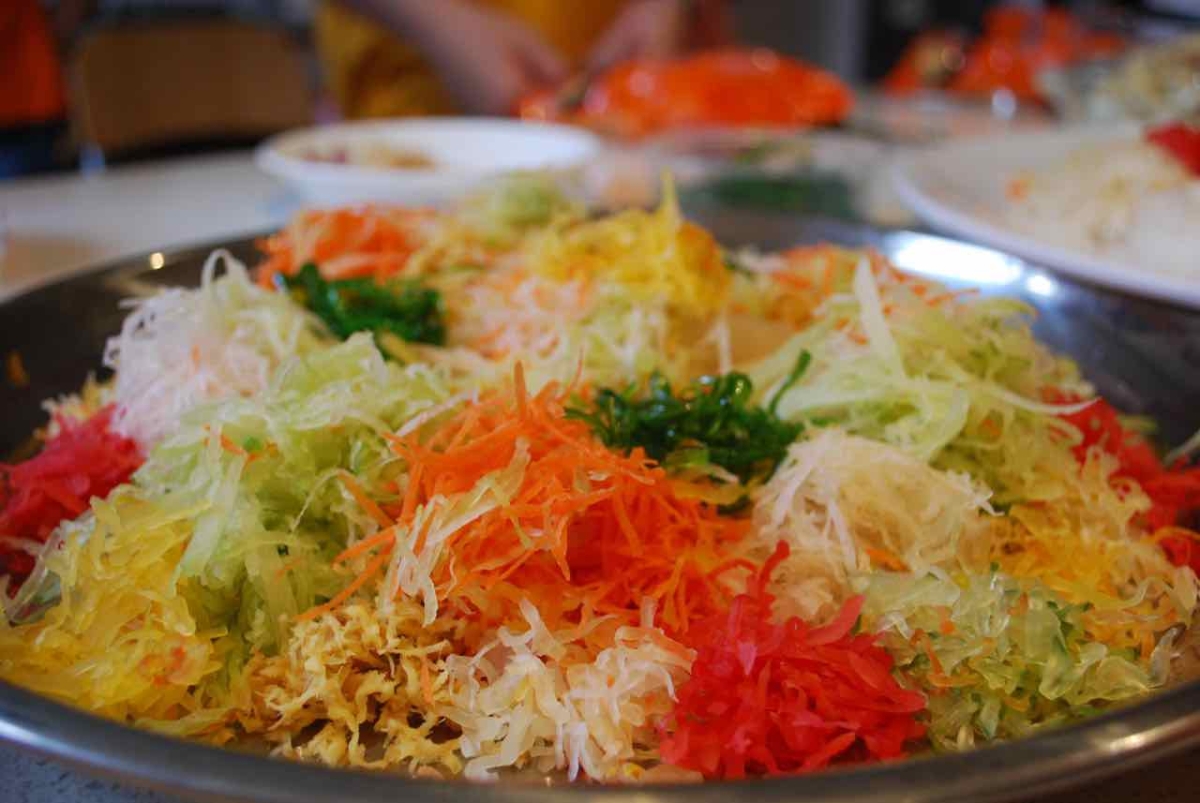 With February marking Lunar New Year, the Korea Center decided to find out more about Yusheng, the traditional and symbolic dish associated with festivities in Singapore, Malaysia and Indonesia. Singaporean Si Hui Chew, a student at the National University of Singapore has this month helped write a short piece explaining some of the history and culture behind this meaningful cuisine.

Yusheng is a customary Lunar New Year dish, traditionally served on the 7th day of Chinese New Year, known locally in Singapore as renri. Renri means “every man’s birthday” with people becoming a year older on this day. In the past, yusheng was only eaten on renri, however these days it is normal for a family to eat yusheng numerous times throughout the New Year period and it is usually served at the start of every meal.

As the Chinese meaning of yusheng represents raw fish, salmon is the focal point of the dish and is served uncooked and cold alongside other ingredients. Arranged on a very large circular plate, an important feature of the dish, yusheng is one of the most colourful cuisines of all Chinese New Year food. It is made up of shredded carrot, green and white shredded radish, pickled ginger, crushed peanuts, pomelo, cinnamon, pepper, golden pillow crackers and is accompanied by a variety of condiments.

The present form of yusheng was developed by four master chefs from Singapore in the 1960s who were inspired by the Cantonese tradition of consuming raw fish strips during Chinese New Year. The chefs added new ingredients and entwined symbolic significance into the dish and presentation. Yusheng has become iconic in Singapore remaining unchanged for 5 decades, recently gaining popularity in Malaysia and other Chinese communities. For modern day convenience, many supermarkets have introduced ready-made yusheng kits to be brought home for consumption that strictly maintain the traditional ingredients.

At home, or even in restaurants, yusheng is not simply something you eat; behind yusheng lies a ritual that brings together family, colleagues, and friends. An important part of yusheng is the specific order that the ingredients must be added one by one, each accompanied by a different New Year wish. For example, salmon is the first to go in, with the server reciting the Chinese idiom “nian-nian-you-yu” which hopes for abundance throughout the year. The rest of the ingredients are added in order, all having their own wishes highlighting prosperity, good luck and success for the year ahead.

Once all of the ingredients have been prepared, everyone seated around the table will stand up to toss the yusheng using chopsticks, a ritual called “lo hei” (meaning to rise), for the person who tosses yusheng the highest is thought to achieve rising prosperity. This is why the big plate is necessary for the tossing of yusheng as the food can go everywhere with the ritual being filled with lots of energy; you can also expect people to yell “huat ah!”, meaning prosperity. Other New Year wishes are shouted loudly during the ritual, and although lo hei can cause disruption to other diners, it is always an extremely happy occasion with everyone participating.

Since Lunar New Year is the only time of the year when we eat yusheng, eating it during any other time would undermine the meaning and atmosphere of this celebratory occasion. When eating yusheng, the dish takes on the underlying idea of a happy family reunion, a gathering of wealth with colleagues, the ushering in of good luck with friends and the increasing prosperity for all Chinese who celebrate.