What's Past is Prologue in the Middle East 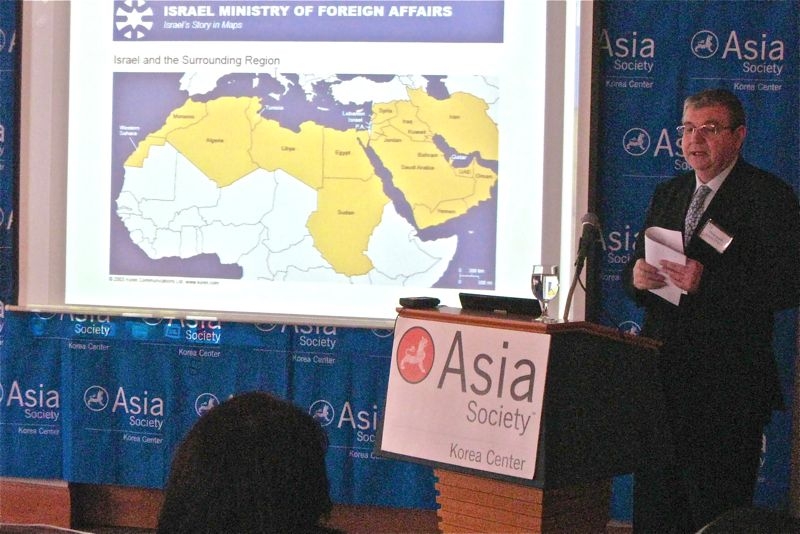 SEOUL, March 15, 2011 - "Maybe it is not the best time to discuss chances for [peace in] the Middle East," said H.E. Tuvia Israeli, Ambassador of Israel to the Republic of Korea, "But actually, it is never the right moment and on the other side of the coin, it is always the right time."

The Ambassador offered these remarks as the guest lecturer for Asia Society Korea Center's monthly luncheon series at the Lotte Hotel Seoul, where he discussed Israel's history and current situation, and the possibility of peace in the region.

Amb. Israeli began by saying he considered himself lucky to be posted to the Republic of Korea, explaining, "I can turn to the political situation upon free choice, whereas my other colleagues need to answer questions and be challenged on a daily basis." He then expounded on Israeli history to present a clearer picture of its current political conflicts. Before explaining the several geographic demarcations that led to such conflicts, Amb. Israeli showed a short film covering 2000 years of history in the region and emphasized that the ending of conflict was, historically, a central theme for Israel. He also touched on the Camp David Summit in 2000, the events of 2005, and the election process that followed thereafter for the Palestinians.

The veteran diplomat also acknowledged the many strides that the leadership in Jordan had made, and that he hoped for negotiations and more concrete dispute resolutions with both Syria and Lebanon. With regard to the Palestinians, meanwhile, Amb. Israeli remarked, "Where we stand today, however, is that Gaza still remains a sense of concern."

"My hope is to get to a point where we can put the Arab-Israeli conflict behind us and be sure it will bring prosperity and much development to the region."

Responding to a question from the audience, His Excellency discussed the future prospects of the several peace treaties Israel currently has with Egypt and Jordan. "The treaty is to be expected and we have followed some of the candidates for the president position. Some say they will keep the peace treaty, some say there are reservations. We in Israel hope this peace will be maintained, although only a little was said about the benefits this treaty will bring to Egypt."

The ambassador ended with a quote by Jose Ramos-Horta, the President of East Timor, who made a visit to the region and wrote about his experiences in the Huffington Post: "... I was struck by the relative calm in the area. As someone all too familiar with situations of subjugation and despair, I could sense that this is a very fragile peace .... Nevertheless, at this particular point in time, Israel and Palestine [the West Bank] form an oasis of tranquility in a region in turmoil."