U.S.-ROK Relations in the New Year 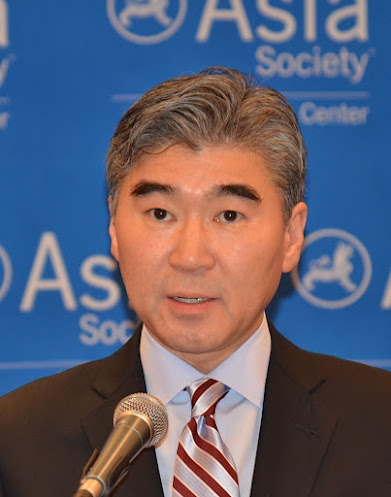 SEOUL, February 14, 2012 — H.E. Sung Y. Kim, the U.S. Ambassador to Korea, was the guest speaker at the Korea Center's February Luncheon. Following is a transcript of his speech.

Yvonne, Dr. Lho Kyongsoo — thank you for inviting me to address the members of the Asia Society Korea Center. I know you have had many eminent speakers here and I am flattered to be invited.

Last October, a few hours before the White House state dinner for President Lee Myung-bak, the U.S. Senate confirmed me as the next U.S. Ambassador to South Korea.

As soon as my appointment became official, the White House protocol called me and invited me to attend the state dinner. I had to rush home, get my tuxedo, and make it to the White House on time — not an easy thing to do in Washington traffic!

That was approximately 4 months ago, roughly 100 days.

Ever since Franklin Delano Roosevelt pioneered the first "100 day" concept in 1933, many have used the 100-day standard as a yardstick for gauging progress and prospects.

I am a little short of my first 100 days as U.S. Ambassador, but during this short period there have been at least four major events that illustrate the importance and breadth of the U.S.-ROK relationship, and I want to highlight these developments in my remarks today:

* The ratification of the KORUS FTA;

* The High-Level Forum on Aid Effectiveness in Busan.

President Obama has said the alliance between the United States and the Republic of Korea is the strongest it has ever been, and one illustration of that strength came when President Obama welcomed President Lee to Washington last October. This was the first state visit by a Korean president since 1998 and only the fifth state visit of the Obama presidency.

As President Obama said, our alliance is — quote — "based upon common values, shared national interests, the bonds of sacrifice during the Korean War, and ties between our people."

Times have changed in the past 60 years of our alliance, and our alliance is evolving to keep up with the times. Under the Strategic Alliance 2015 Roadmap (SA 2015), wartime operational control of Korean forces will transition from the U.S.-ROK Combined Forces Command to the ROK Joint Chiefs of Staff in December 2015. U.S. Forces Korea will become the United States Korea Command, or U.S. KORCOM, and will provide manpower for our supporting relationship with the ROK Joint Chiefs of Staff. The U.S. will continue to back the defense of the Republic of Korea with full might of the U.S. military.

Sometime around the year 2016, our goal is that the number of U.S. installations and facilities will have been reduced from 107 to 48 as a result of this transformation, with facilities north of Seoul consolidated to Pyeongtaek and Daegu. Not only will USFK emerge with a significantly smaller footprint, but the consolidation will increase readiness and efficiency, and reduce costs.

If the U.S.-ROK security alliance is the backbone of our relationship, then the heart is our people-to-people connection.

In his state dinner toast, President Obama said — quote — "the essence of our alliance … is jeong," the deep bonds of affection that are formed when people get to know each other over time. As a Korean-American, I have a special appreciation for jeong between our two peoples.

What stands out about our people-to-people ties is the degree to which they have been formed by the people themselves, with little or no governmental intervention. Today there are over 2 million Koreans and Korean-Americans living and working in the United States. Korean Americans can be found in every corner of the American economy: business owners, doctors, lawyers, bankers, scientists, architects, teachers and on and on. And I'm told there are also a few who have done well in diplomacy.

Korea continues to send the largest number per capita of students from any nation in the world to the United States — almost 100,000. As we have done for decades, the United States is helping to train the next generation of Korean leaders. And Americans are learning about Korea through these bright young Koreans.

We at the American Embassy are working hard to expand these ties even further. We have a variety of different exchange programs to bring people together, including the International Visitor Leadership Program — now in its 72nd year. In Korea, as we do around the world, the embassy nominates talented young leaders in key fields for an intensive professional-level exchange in the United States.

More than 1,200 future Korean leaders have participated in the program, including two who later became presidents — Kim Dae-jung and Kim Young-sam — as well as seven former prime ministers, numerous cabinet and National Assembly members, educators, journalists, community leaders and artists. Nominations continue this year as the Embassy looks at not only rising political leaders but also at those in NGOs and other organizations who are on the front lines in, for example, the fight against climate change and promoting green growth, counseling victims of human trafficking victims, and working with individuals with cognitive handicaps.

Our ties go both ways, of course, and over 100 Fulbright English Teaching Assistants (ETAs) from the United States spend a year teaching at public schools outside of Seoul. The Fulbright ETA Program is the oldest and largest ETA program in the world. Partnered with local Korean co-teachers, the ETAs provide the native English knowledge and skills that are otherwise difficult to provide to students outside Seoul. One very exciting aspect of this program is that the ETAs all live with Korean families during their stay in Korea to get a first-hand taste of Korean life and culture. And not just in big provincial cities like Daegu (대구) and Busan (부산), but in small towns like Iksan (익산), Naju (나주), and Gumi (구미).

Another major event from the beginning of my tenure as Ambassador was the passage of the KORUS FTA by the U.S. Congress in October and by the Korean National Assembly in November. Indeed, this is probably the most important achievement in our bilateral relationship in a generation.

Korea and the United States are now in the process of reviewing and discussing our respective laws and regulations. We are making our best efforts to get this done as quickly as possible, so both countries can begin realizing the benefits of the FTA.

The KORUS FTA covers more than $100 billion of two-way trade in goods and services. It's important to realize that KORUS is more than trade statistics. Consumers in both countries will benefit greatly from tariff cuts. So it is vitally important for both economies and is a natural extension of our mature trading relationship.

KORUS FTA also represents a new milestone in the strengthening of our bilateral alliance. KORUS will bring our relationship to a new level and tie our two countries together as partners for the long term.

Let me say a few words about North Korea. The death of Kim Jong-il last December reminded us all that North Korea makes our alliance essential, both for the peace and security of the Korean Peninsula and for the rest of Northeast Asia.

I want to emphasize that the new leadership in Pyongyang has not produced a change in U.S. policy. The United States remains committed to peace and security on the Korean peninsula, denuclearization, the promotion of human rights, and the peaceful reunification of Korea.

After Kim's death, Secretary Clinton offered condolences to the North Korean people, reiterating our long-standing concern for their well-being. She added that — quote — "it is our hope that the new leadership of the DPRK will choose to guide their nation onto the path of peace by honoring North Korea's commitments, improving relations with its neighbors, and respecting the rights of its people."

The United States has maintained close consultation with the ROK as both sides have engaged North Korea in bilateral discussions to encourage Pyongyang to take concrete and irreversible steps toward denuclearization. I cannot stress strongly enough that we have, and will continue, to coordinate with Seoul on every step of our engagement with North Korea. As we have said privately and publicly, if Pyongyang wants a better relationship with the rest of the world, the first stop has to be in Seoul.

U.S.-ROK coordination on the way forward with North Korea is critical, our military partnership is fundamental, and our economic relationship is essential, but I believe the most interesting and most exciting facet of our relationship is our expanding cooperation beyond the Korean peninsula. I want to take the relationship beyond the peninsula.

By any measures, Korea today is a major country and an important global player. It has the world's 14th largest economy, is a G20 member, and has assumed more international responsibility commensurate with its global stature. The United States strongly supports this growing role, which strengthens our relationship by expanding international cooperation based on our common values and shared national interests.

On the security front, the Republic of Korea currently has servicemembers deployed in more than a dozen countries around the world, including a provisional reconstruction team in Afghanistan's Parwan province, peacekeepers and aid workers in Haiti, counter-piracy assets off the coast of Somalia, and peacekeepers in Lebanon.

The United States and Korea have cooperated in promoting human rights, building a stable Iraq and Afghanistan that do not serve as breeding grounds for terrorists, and countering the proliferation of weapons of mass destruction and their means of delivery. Regionally, we are working closely with the ROK on improving maritime security through the ASEAN Regional Forum and advancing the capacities of countries in the Lower Mekong region.

Seoul has also hosted a number of major international conferences lately, including the G-20 in 2010, the Nuclear Security Summit next month, and, another of the major events of my early days here as Ambassador, last November's High-Level Forum on Aid Effectiveness in Busan.

The Forum highlighted Korea's unique credibility on development as one of the great success stories of the 20th century, a country that has moved from being an aid recipient to an important donor nation. We applaud Korea's pledge to triple its development budget by 2015.

In that spirit, last November we launched the inaugural ROK-U.S. High-Level Discussion on Africa. During that landmark discussion, our governments committed to examining ways the United States and South Korea can collaborate on the African continent, from peacekeeping to development aid.

South Korea will also host the 2nd Nuclear Security Summit next month (March 26-27). More than 50 heads of state and International Organizations will participate in the Summit, including President Obama.

Seoul's hosting of the Nuclear Security Summit is a yet another testament to Korea's commitment to global leadership and cooperation.

America's participation in EXPO 2012 in Yeosu, Korea is another reflection of our deep and broad partnership. The USA Pavilion will celebrate the diversity of our nation, the wonder of our Oceans and Coasts, and strategies for addressing global environmental challenges. U.S.-ROK cooperation on green growth, renewable energy, and applied research will be highlighted by the American exhibition. I am excited to take an active part in the EXPO as the USA Commissioner. In fact, my first public event in Korea was signing the Participation Agreement with the Commissioner and Chairman of the EXPO Organizing Committee.

So that's my 100-day report. Before I conclude, let me briefly comment on an issue that goes beyond Korea: America's high-profile "pivot" towards Asia. The concept has received much attention but the truth is America has always been deeply engaged in East Asia. As both President Obama and Secretary Clinton have demonstrated, the U.S. understands the strategic importance of reinforcing our relationships in the region. But our partnerships in the Asia-Pacific region are not new. They are longstanding and run deep; in the case of Korea, we have been deeply engaged since 1945 and before. In short, our commitment to Korea, Northeast Asia and the rest of Asia is long-standing and it is strong. And it is permanent.

The United States is, has always been, and will always be, a Pacific power.