Redistribution of Power through the Angbu-ilgu, a Unique Korean Sundial | Asia Society Skip to main content

Redistribution of Power through the Angbu-ilgu, a Unique Korean Sundial 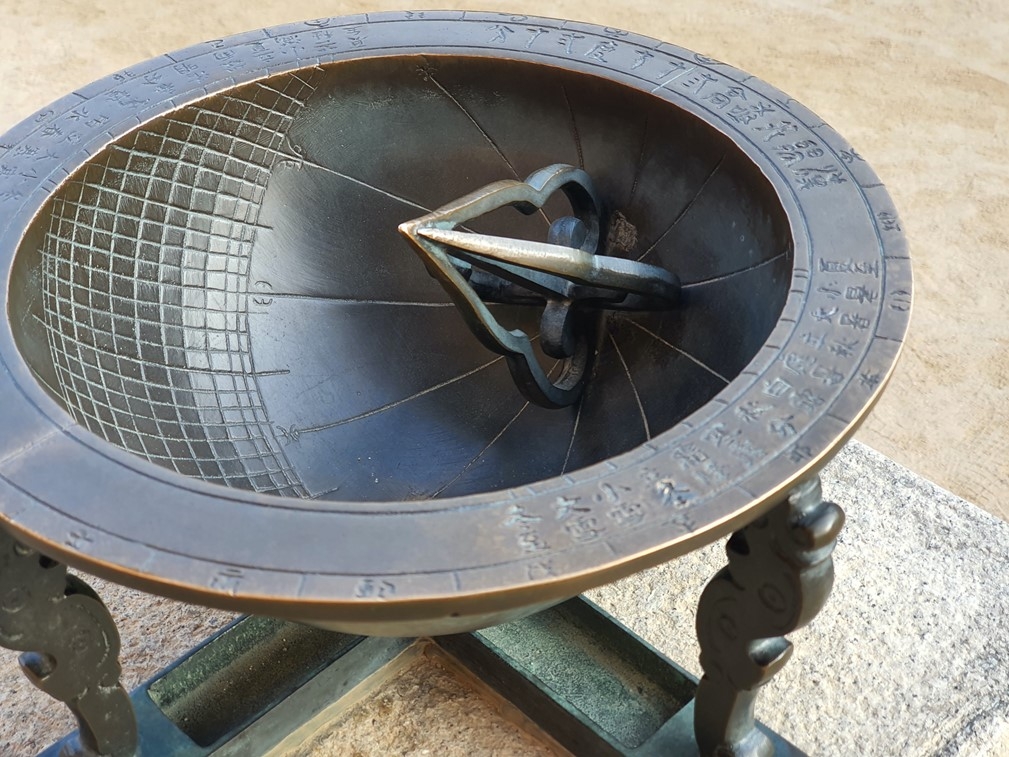 As a part of the Leo Gala Series to give wider publicity to Korean culture and promote its beauty beyond the facade, Asia Society Korea presents a special report on a scientific invention that was made during the reign of King Sejong the Great, whose litany of legacies still benefit Koreans to this day.

Angbu-ilgu (앙부일구, 仰釜日晷) was a sundial created in 1434 during the Joseon dynasty under King Sejong’s reign. Upon King Sejong’s orders, a team of great scientists including Lee Soon-ji and Jang Yeong-sil, created a unique design for this astronomical instrument. The angbu-ilgu was not a mere replica of other sundials. Its unique quality is specified in its name, ‘a sundial in the shape of the cauldron looking up at the sky.’ While other sundials were flat, the angbu-ilgu was concave in shape and consisted of three parts: a round and concave dial plate called siban (시반, 時盤), a gnomon or a youngchim (영침, 影針), and a pedestal.

In the past, many people believed in the Flat Earth theory, which assumed that the sky was round. This belief was directly mirrored in the siban resulting in a pot-like shape. The round, concave shape had a practical purpose as well. The common flat sundial was only capable of reading the time of the day and, depending on the time and the respective position of the sun, it was difficult to read when the shadow of the gnomon was longer or shorter than the dial plate. However, with its pot-like shape, the angbu-ilgu was able to clearly indicate the time of the day since the concave shape automatically altered the shape of the shadow. Moreover, it’s unique shape allowed for it to tell the julgi (절기, 節氣), the solar term or the 24 periods in traditional East Asian lunisolar calendars, depending on the length of the shadow.

Within the surface of the siban, there are seven vertical lines and 13 horizontal lines. During the Joseon dynasty, the day was divided into 12 periods and each period, approximately two hours, was represented by a Chinese zodiac sign. The seven vertical lines represented the 14 hours of the day during which the sun was up. The horizontal lines measured the length of the shadow of the gnomon. The 13 horizontal lines read the 24 julgi, solar terms. There were only 13 to represent the 24 solar terms since the length of the shadow would increase as it moved from January to July but return to the original length as December approached.

Aside from the scientific significance of the angbu-ilgu, the instrument highlighted the considerate nature of King Sejong. King Sejong installed angbu-ilgu outside the palace for public use, despite it being the representative sundial of the Joseon Dynasty. Normally such an instrument would be considered a national treasure and kept hidden from foreign envoys and reserved for the higher class. During this period, the knowledge regarding time was a luxury and a sign of power. The angbu-ilgu was often lavishly decorated with ivory, silver linings, and elaborate pedestals to demonstrate the wealth and strength. Peasants and commoners who did not have access to the expensive instrument had to depend on the sun and the bells that were rung by government officials to announce the opening and the closing of the palace or city gates. However, King Sejong installed the instrument outside the palace with the intent of sharing his power with his people. He even designed an angbu-ilgu using Chinese zodiac signs, represented by twelve animals, for those who were illiterate. Moreover, for peasants whose lives were highly dependent on agriculture and the respective solar terms, the angbu-ilgu improved the living conditions of commoners by informing the people which term of the year it was.

Unfortunately, all of the angbu-ilgu that were created during the reign of King Sejong were destroyed during the Japanese invasion of Korea in 1592. The existing angbu-ilgu are from the late 17th century, or the late Joseon Dynasty. Although it is not certain, it is believed that they are nearly identical to the ones designed under King Sejong.  Today, original angbu-ilgu can be found in museums and replicas can be found at palaces and in Gwanghwamoon Square in front of the King Sejong statue along with other scientific achievements conceived during his reign.