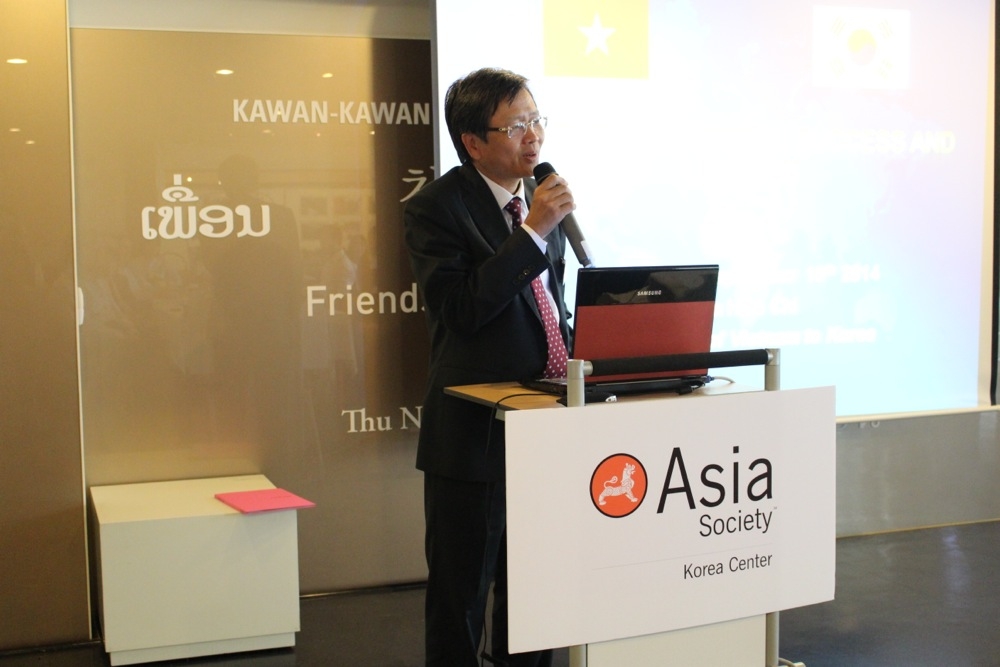 The Asia Society Korea Center 2014 Monthly Luncheon Series resumed on Tuesday, September 16 at the ASEAN-Korea Centre Exhibition Hall in Seoul. The guest speaker was Ambassador Pham Huu Chi from the Embassy of the Socialist Republic of Vietnam In the Republic of Korea, who talked about “Poverty Reduction in Viet Nam: Success, Lessons and Role of World Community”. Poverty reduction is now at the forefront of strategy in Vietnam and the lecture highlighted the successes and achievements of more than two decades of policy implementation while also looking at the remaining challenges and solutions that Vietnam must realize. Local dignitaries, professionals, members of the press and students were all in attendance to hear the Ambassador deliver a fascinating insight into Vietnam’s successful fight against poverty.

Ambassador Pham Huu Chi started his talk by explaining how poverty reduction is now a comprehensive strategy in Vietnam and this is in response to the high poverty levels Vietnam faced in the 1980’s and early 1990’s when the GDP of the country was around $100 per year. In 1986 the Vietnamese government mandated the DoiMoi (open door) policy, shifting from a centrally planned economy to a market oriented one, achieving great economic and social success. This was followed up in 2002 with the launch of the Comprehensive Poverty Reduction and Growth Strategy (CPRGS) as it was recognized that poverty was the root cause of social and political unrest. The Ambassador talked about how this poverty also affected education and healthcare, led to gender inequality, the devastation of the environment and was the number one obstacle to development.

The next part of the lecture focused on the achievements and lessons learned after the implementation of these policies. The household poverty rates in Vietnam reduced dramatically from 58% in 1992 to 15.5% in 2008 and 7.6% in 2013 as more than 30 million people were lifted out of poverty. The motto of this strategy was to use the strength and resources of all of the country, central to the grass root level. Rather than giving money or food, it was explained how the Vietnamese government would teach people how to farm or fish and by giving poor people fishing nets or farm buffalos, they could find a way to support themselves. Ambassador Pham Huu Chi also talked about the crucial role that the international community plays with their assistance and cooperation and highlighted how Korea itself donates three hundred million dollars per year to assist in such projects.

In the concluding part of the lecture the remaining challenges and solutions to the issue of poverty were highlighted. First of all, the poverty rates in the upland regions and among the ethnic minorities are five times higher than 90% of the population. In addition, many poor people still live in isolated areas with no assets, poor education and poor healthcare. Finally, although the poverty rates in the urban areas are low, residents still have financial burdens because of the rising cost of food and basic services. Therefore, Vietnam must start infrastructure development in the uplands and remote areas in the forms of roads, bridges, hospitals and schools. There must also be a higher priority on education for ethnic minorities as well as enhanced community health care. The country must continue to build on the hard work and progress that has been made so far and the media must also play a greater role in highlighting the shortcomings of the government. Ambassador Pham Huu Chi ended by saying how Vietnam is not embarrassed to say that poverty in the country is high but it does not want to hide and instead wants to address the issues and in his role as a diplomatic he hoped for less spending on defense and more on reducing poverty levels for the poor.