Korea's Place in the Future: Challenges and Opportunities 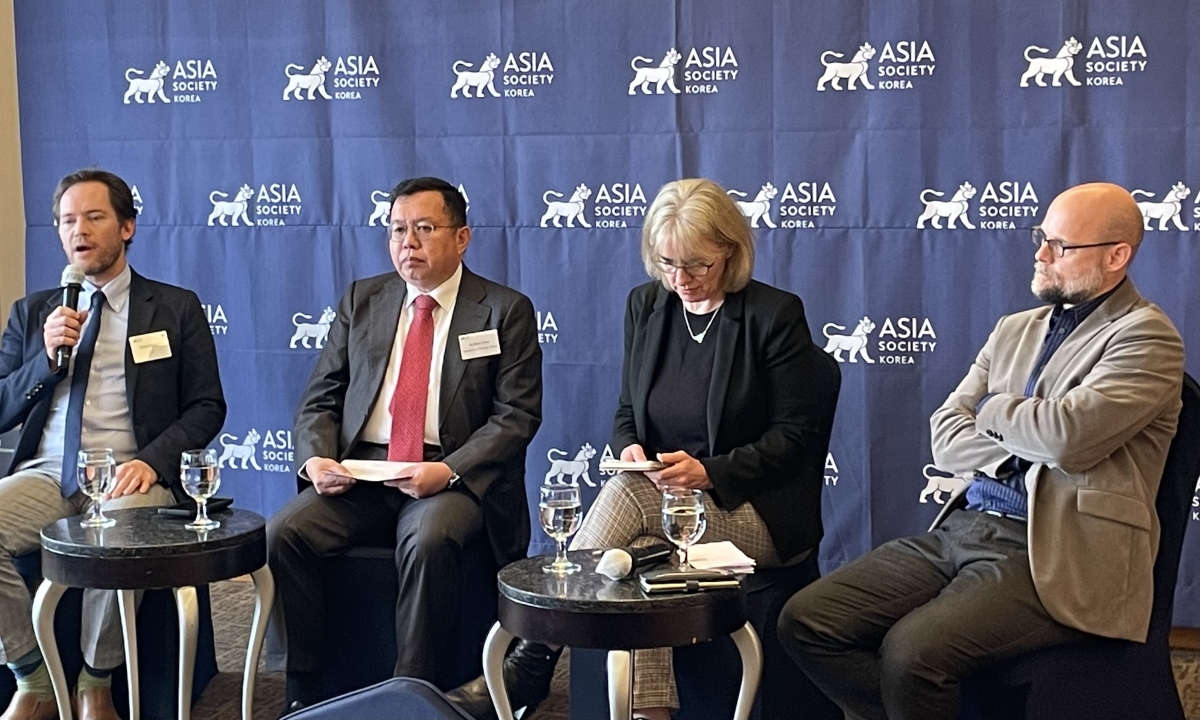 November 21, 2022 - The final lecture of the Monthly Luncheon Series for this year concentrated on the complex and highly debated political issues surrounding South Korea. Former lieutenant general, In-Bum Chun, professor Mason Richey, and Asia correspondent Nicola Smith all offered their predictions for the future of Korea in light of the likely developments in China-US relations, escalating tensions between China and Taiwan, and the conflict in Ukraine, as well as how these political shifts might affect the relationship between South and North Korea. Professor John Delury enthusiastically moderated the panel in conversation as they discussed the continued power balance, Korea's actions and responses to these issues, and the reasons why it would be unfavorable for Korea to develop nuclear weapons.

In-Bum Chun is a graduate of the Korea Military Academy (KMA) in 1977. He was selected as the aide to Lieutenant General Lee, Ki-Baek. In 1983 General Lee, as Chairman of the ROK Joint Chiefs of Staff, was a victim of the Rangoon bombing. Lieutenant General (Ret.) Chun was credited with saving General Lee’s life and was awarded the National Security Medal (Kwang-Bok).

Upon completion of Regimental Command, Lieutenant General (Ret.) Chun was assigned as the Chief of the Election Support Branch, Civil-Military Affairs/Strategic Operations Directorate at the Multi-National Force (MNF) in Iraq. He was recognized by both the Republic of Korea and the United States for his contribution to the first “Fair and Free” elections in Iraq on January 30, 2005, with the Hwa-Rang Combat Medal and the U.S. Bronze Star Medal.

From November of 2005, Lieutenant General (Ret.) Chun served as the Director of U.S. Affairs at the Korean Ministry of National Defense and was involved in negotiations and cooperation with the U.S. on the relocation of U.S. forces, camp returns, ROK/U.S. Joint Vision Study, Special Measures Agreement, and the transition of the Wartime Operational Control.

On July 19, 2007, twenty-three Korean missionary workers were kidnapped by the Taliban. Lieutenant General (Ret.) Chun was credited with the successful rescue mission and was awarded the Korean Presidential Citation. Upon completion of his duties as the Deputy Director for Strategic Planning at ROK JCS, Lieutenant General (Ret.) Chun took over the OPCON Transition Group.

LTG(R) Chun commanded the 27th Infantry Division and was the Senior Member of the UN Command Military Armistice Commission. In November of 2013, he was promoted to Lieutenant General and was assigned as the Commander of the ROK Special Warfare Command. Lieutenant General (Ret.) Chun retired from active duty as of July 31, 2016.

Upon his retirement, he conducted concurrent fellowships with the Brookings Institute and the U.S.-Korea Institute (USKI) at the Johns Hopkins School of Advanced International Studies (SAIS) until October 2017. He was also a Distinguished Visiting Fellow at the Sam-Nunn School of Advanced Studies at Georgia Tech.

Mason Richey is a senior contributing writer to Asia Society Korea and an associate professor of international politics at Hankuk University of Foreign Studies (Seoul, South Korea). Dr. Richey has also held positions as a POSCO Visiting Research Fellow at the East-West Center (Honolulu, HI) and a DAAD Scholar at the University of Potsdam.

His research focuses on U.S. and European foreign and security policy as applied to the Asia-Pacific. Recent scholarly articles have appeared (inter alia) in Pacific Review, Asian Security, Global Governance, and Foreign Policy Analysis. Shorter analyses and opinion pieces have been published in War on the Rocks, Le Monde, the Sueddeutsche Zeitung, and Forbes, among other venues.

Nicola Smith is Asia correspondent for the UK’s Telegraph and recently relocated to Seoul after six years in Taiwan. Since 2016, she has covered major political and social developments in East and Southeast Asia from global tensions over North Korea to the Hong Kong protests, the Myanmar crisis and cross-Strait relations. Previously, she was posted in New Delhi for the Sunday Times for six years, focusing on India, Pakistan and Afghanistan.