September 24, 2021 – As a part of our Ambassador Interview webzine, Asia Society Korea interviewed H.E. Sami M. Alsadhan, the Ambassador of the Kingdom of Saudi Arabia to the Republic of Korea. 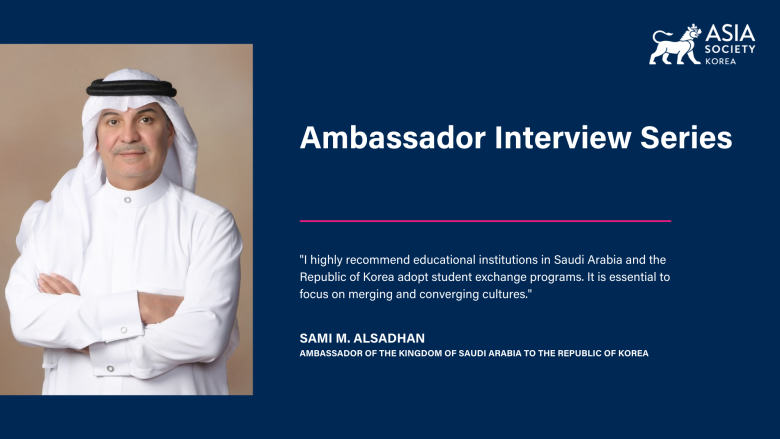 1. The Kingdom of Saudi Arabia celebrates its National Day on September 23rd, commemorating the founding of the modern Saudi nation. Has National Day been celebrated differently since the start of COVID-19?

Every year, we usually celebrate this day with pride, deep gratitude, and dignity. We need to appreciate the efforts and sacrifices made by our ancestors in building, developing, and serving the Kingdom of Saudi Arabia. Unfortunately, COVID-19 has led to the cancellation of National Day celebrations in the Kingdom and most overseas Saudi diplomatic missions.

2. Many Koreans would highlight the 1970s and 80s as the most dynamic period in Saudi-ROK relations. Back then, Riyadh enjoyed an economic boom due to surging oil prices, and Korean construction companies were involved in massive Saudi building projects. What would you say is the most significant moment, or milestone, in Saudi-ROK bilateral relations?

We are certainly proud of the long, historic alliance between Saudi Arabia and South Korea. Since the establishment of diplomatic relations in 1962, both countries have economically prospered from the partnership. The 1970s and 80s were beneficial to both nations as Korean companies entered the Saudi market and were involved in mega-construction projects. However, since then, Saudi-Korea ties have also developed dramatically in other fields such as politics, military, education, culture, intellectual property, information technology, and health.

3. In 2019, Saudi Arabia and Korea strengthened their bilateral cooperation and strategic partnerships. South Korea pledged to provide full support to Saudi Arabia's efforts in diversifying its economic portfolio, breaking away from a dependence on the energy segment — a project known as Vision 2030. The pledge received media spotlight as the two countries agreed to a string of billion-dollar deals in energy, infrastructure, healthcare, and capacity-building sectors. What can you tell us about this partnership, and how does Vision 2030 go beyond traditional oil collaborations?

A memorandum of cooperation on the Joint Vision (Saudi-Korean Vision 2030) was signed in October 2017. The Vision focused on strengthening the flow of foreign direct investment and bolstering trade ties between both countries. In the run-up to the conclusion of the Joint Vision, the Saudi-Korean Vision 2030 Committee was established. The committee acts as a platform to monitor progress, approve Vision projects, and troubleshoot bottlenecks. The committee convenes annually on an alternating basis between the two countries.

The first meeting of the Saudi-Korean Committee took place in Seoul in October 2017, with 40 projects and initiatives selected as part of the Saudi-Korean Vision 2030. The projects were categorized into five sub-groups: 1, Energy and Manufacturing; 2, Smart Infrastructure and Digitization; 3, Capacity Building; 4, Healthcare and Life Sciences; and 5, Small- and medium-sized enterprises (SMEs) and Investment.

4. At the Gulf Cooperation Council (GCC) Summit in January this year, the Korean Ministry of Foreign Affairs commented on the exemplary leadership of Saudi Arabia in helping to ensure peace and stability in Yemen. What is Saudi Arabia's perspective on ROK-DPRK bilateral relations?

Saudi Arabia's foreign policy aims to ensure stability and prosperity on the Korean Peninsula. We support the government of the Republic of Korea in all decisions that contribute to bringing peace to the region.

5. Every country has its culinary traditions. To those unfamiliar with Saudi Arabian food culture, camel is a Middle Eastern dish that will surely interest our audience. Besides the well-known fact that camel meat is eaten at important events and during Ramadan, what else can you tell us about Saudi cuisine and its food culture?

Camel meat has long been a popular main course for special occasions on the Arabian Peninsula as it is known for its nutrition values and low-fat content. In addition to camel meat, Saudi cuisine has a wide variety of dishes, with each region having specific meals prepared using different ingredients.

6. In October 2019, K-pop band BTS became the first foreign artist to play a solo stadium show in Saudi Arabia. Video footage from the concert showed thousands of Saudi fans singing along to the music, lighting up the stadium with lanterns and mobile phones. With Riyadh increasingly loosening restrictions on entertainment, what kind of new cultural cooperation do you expect moving forward?

As you mentioned, BTS was the first foreign band to perform a solo stadium show in Saudi Arabia. This concert highlights the importance of cultural bonds in enhancing the relationship between countries. I hope we can cooperate further in the cultural sector by exchanging experts and specialists in culture and literature, hosting cultural forums, and promoting travel through tourist and heritage sites.

7. In Saudi Arabia, Korean language courses can be taken in universities such as Prince Sultan University or King Saud University. Conversely, the Korea Herald reported in 2017 that 7 out of 10 students sitting a second foreign language test for the Suneung exam in Korea (KSAT) chose Arabic. That means almost 52,000 students sat an Arabic exam that year. Given such conditions, how might Riyadh and Seoul strengthen people-to-people exchanges, especially among younger people?

I highly recommend educational institutions in Saudi Arabia and the Republic of Korea adopt student exchange programs. It is essential to focus on merging and converging cultures. Notably, many Saudi and Korean youth can learn the other's language and understand each other through interaction. If you look at social media platforms, you will be surprised to find many Saudi Arabians love learning Hangeul and are big fans of K-pop and K-drama, and vice versa.

H.E. Sami M. Alsadhan joined the Western State Department at the Ministry of Foreign Affairs Headquarters in 1991. He has served in various offices including as Deputy Consul of the Saudi Consulate in the United States (1998-2001), Head of Economic and Political Department at the Saudi Embassy in Rome, Italy (2005-2010), Deputy Chief of Mission at the Saudi Embassy in Washington D.C. (2010-2020) and joined the Royal Embassy of Saudi Arabia in Seoul, Korea in June 2021.