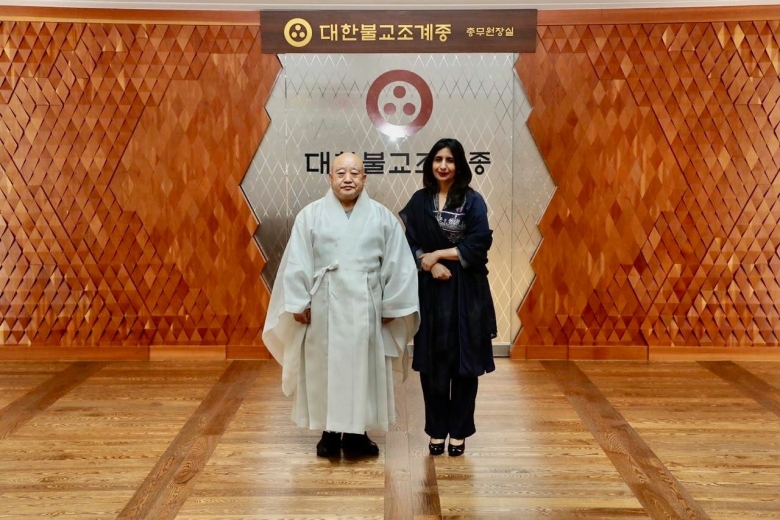 Pakistan and Korea have been collaborating in the energy sector, especially with respect to renewable energy. The Country Partnership Strategy also notes the energy sector as one of the core areas of cooperation. What has been done so far and what can we expect in the future?

Pakistan and the Republic of Korea have a robust partnership in the energy sector. Korean companies are engaged in developing several hydropower projects in Pakistan. Some off these projects are complete and have started power generation. Others are at different stages of development. A few other projects are under discussion between the two sides. Pakistan has a very good experience with Korean companies which have demonstrated high degree of professionalism in develop high quality projects. We hope this cooperation will continue.

Your academic background in physics is unusual for a diplomat. Could you tell us about how your understanding of hard sciences has impacted your career in foreign policy?

Although I have a background in Physics, over time I have developed a deep interest in international law and politics. I also had the opportunities to deepen my understanding in these areas when I pursued studies in European Studies, International law and International Relations.
This diverse academic background has helped me grow into the job of a diplomat. Having a science background came particularly useful when I was dealing with nuclear security and non-proliferation issues. It has also helped me bring a unique perspective on complex issues which is generally appreciated.
That is why, in Pakistan individuals of diverse background are encouraged to apply for civil service jobs. In the foreign service of Pakistan, we have several engineers, doctors and physicists apart from those with the usual background in law, political science and international relations. This diversity of backgrounds enriches the debate on policy issues which is critical in responding to the complex foreign policy challenges faced by Pakistan.

Korea-Pakistan trade has been increasingly active in the past few years and has remained relatively stable amid the COVID-19 pandemic. Since arriving in Korea, your meetings with institutions such as KOICA and KOIMA are noteworthy. Could you discuss your future plans for bilateral cooperation?

Pakistan and Korea have a multidimensional relationship rooted in our decades long bonds of friendship. Bilateral trade and investment are an important pillar of this relationship.
There is enormous potential of bilateral trade between Pakistan and the Republic of Korea. The two sides have made a study to explore the bilateral trade potential and found that because of complementarity of our economies, both countries can benefit a great deal from enhanced economic exchanges including possible arrangements for preferential trade.
The challenge is to encourage business community of both countries to explore each other’s market. Pakistan is a market of 220 million people which offers attractive opportunities to Korean businessmen. My meetings with Korean companies or with KOTRA, KOICA or KOIMA are part of our effort to further strengthen our bilateral economic cooperation.

During your recent meeting with Won Haeng, President of the Jogye Order, you mentioned a documentary on Gandhara art and Buddhist artifacts. Could you elaborate on the documentary and share your thoughts on further efforts that could be made for sharing cultural assets?

Gandhara civilization rooted in the northwest of Pakistan was the cradle of Buddhism from 6th Century BCE to 11th Century CE. It became the source of spread of Buddhism to Tibet and East Asia including Korea. Pakistan and Korea thus have deep Buddhist links.
Monk Maranantha who is credited with introducing Buddhism to Korea belonged to Chota Lahore region in Pakistan. He arrived at the port of Beopsongpo in Baekje kingdom in 384 CE. Later in the 8th century, monk Hyecho travelled from Silla dynasty in Korea to South Asia, Central Asia and the Middle East in search of Buddhist texts. During this journey he traveled to five Buddhist kingdoms of which three are in today’s Pakistan.
In commemoration of these historic and religious links, late last year President Jogye Order headed a delegation of about 80 monks to Pakistan and paid pilgrimage to some of these historic sites. It was a spiritual journey which has caught the imagination of Buddhists in Korea and rest of the world.
We therefore intend to introduce these historic and religious sites widely to encourage more Koreans to travel to Pakistan and see for themselves this rich heritage. We are in discussions with Jogye order to explore various options to promote this incredible connection of Buddhism between our two nations The COVID situation has delayed some of these projects but we hope these projects will soon come to fruition.

Last month, headlines in Korea have been covering issues regarding domestic violence and child abuse. Several articles regarding a case of child abuse in Pakistan have also been covered recently. How is Pakistan combating the issue?

These issues are a social evil that afflict every society. Pakistan is no exception. Such cases shock the society and our collective conscience. In many cases perpetrators are family friends or people of trust.
The Zainab case was a high-profile case caught the imagination of the entire Pakistani nation. Raped and killed by a neighbor, Zainab’s death ignited a campaign to protect children from such incidents. The culprit was tried and later awarded death penalty. But a more significant result was the adoption by “Zainab Alert, Response and Recovery Act 2019” which created an entire new system for protections, recovery and rehabilitation of victims of child abuse.
The #MeToo movement has also reached Pakistan and women are becoming increasingly vocal and the society at large more supportive of their rights. Women March held annually in March has become a national event that attracts women and men from all strata of society, highlights women issues and engenders debate on how we can empower women and promote and protect their rights including through legal and administrative reforms. These days there is an active debate in Pakistan on punishments relating to rape cases. Women are no longer remaining silent on incidents of abuse and have become active participants driving fundamental change in society.

The so-called ‘Third sector’ has a crucial role to play in developing relations between countries and peoples. It helps us understand and appreciate each other and solidify bilateral relations in an effective and far-reaching manner. Promoting interaction between universities, think-tanks, and cultural associations has therefore become an essential aspect of diplomacy today.
We at the Embassy of Pakistan are actively engaged in reaching out to the Korean civil society especially the academia, journalists and think-tank experts. We are working to develop linkages between counterpart associations, women groups as well as student and youth organizations. This includes exchange of delegations and sports teams, cultural exhibitions, research on each other’s language, literature and culture and exchange of movies, drama and music.  We are also prioritizing collaboration between local government officials who can develop these relations at the grassroots level. In this context, we have recently established Pakistan-Korea Friendship Association involving the civil society to promote friendship and understanding between our two countries. I encourage Korean academia to join the Association.