Interview with H.E. Akiva Tor, Israeli Ambassador to the Republic of Korea

A veteran diplomat who is now half a year into the office in Seoul, Ambassador Tor is described as an envoy who might have a better mental map of the country's capital than some Seoulites do. He sat down with Asia Society Korea Executive Director Yvonne Kim to discuss everything from bilateral relations to Israel's successful handling of the coronavirus. 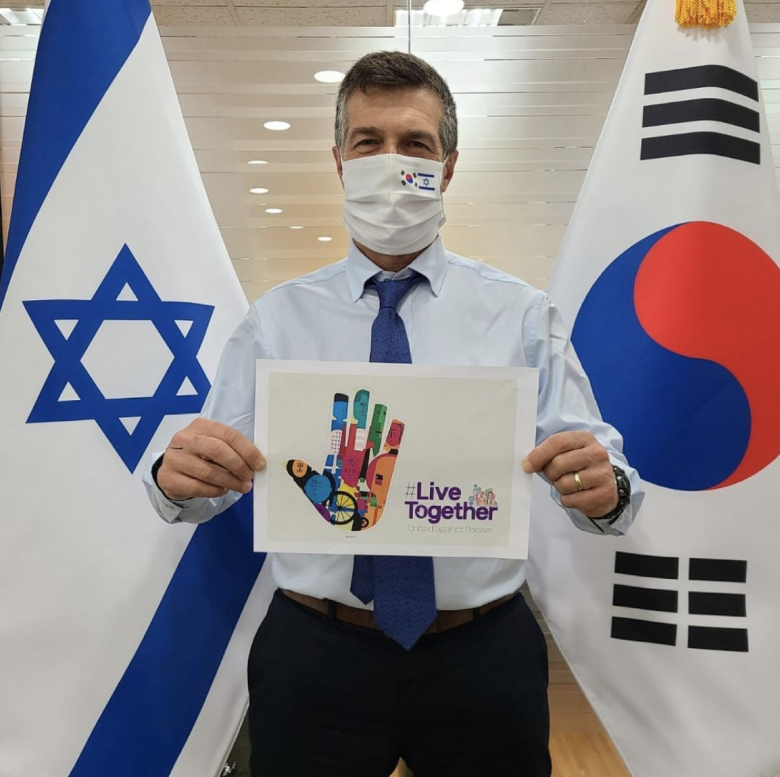 H.E. Akiva Tor, Ambassador of Israel to the Republic of Korea, posed for a photo on June 1st as he joined the #LiveTogether campaign — an anti-discrimination social media initiative jointly organized by the South Korean MOFA and UNESCO to fight racism and discrimination around the world.

About H.E. Akiva Tor, Israeli Ambassador to the Republic of Korea

H.E. Akiva J. Tor was appointed as the Ambassador of Israel to the Republic of Korea in November 2020.
Prior to his appointment to Korea, he started his career as Director at Israel Economic and Cultural Office in Taipei in 1996. After joining Israel’s Ministry of Foreign Affairs, he served as Deputy-Spokesman (1998 – 2000); and Deputy Director of the Department for Palestinian Affairs (2000 – 2002). He also served as World Jewish Affairs Adviser to the President of Israel for about three years since 2003; Israel Consul General in San Francisco and Pacific Northwest (2008 – 2012); and Head of Bureau for World Jewish Affairs and World Religions in MFA (2013 – 2020).
H.E. Tor received his BA in Analytical Philosophy from Columbia University (1981-1985), then pursued his graduate studies and received his MA in Political Science and Contemporary Jewish Thought, and an MPA from Harvard Kennedy School (2002-2003) with the support of Wexner and Goldman Fellowships, respectively.
Amb. Tor served as a paratrooper in the Israel Defense Forces (IDF) (1985-1987) and was honorably discharged as an infantry captain. His most recent published works include Building a Bridge Over Troubled Waters: A Jewish Peace Corps (2015), and The Jewish Blindness (2011).