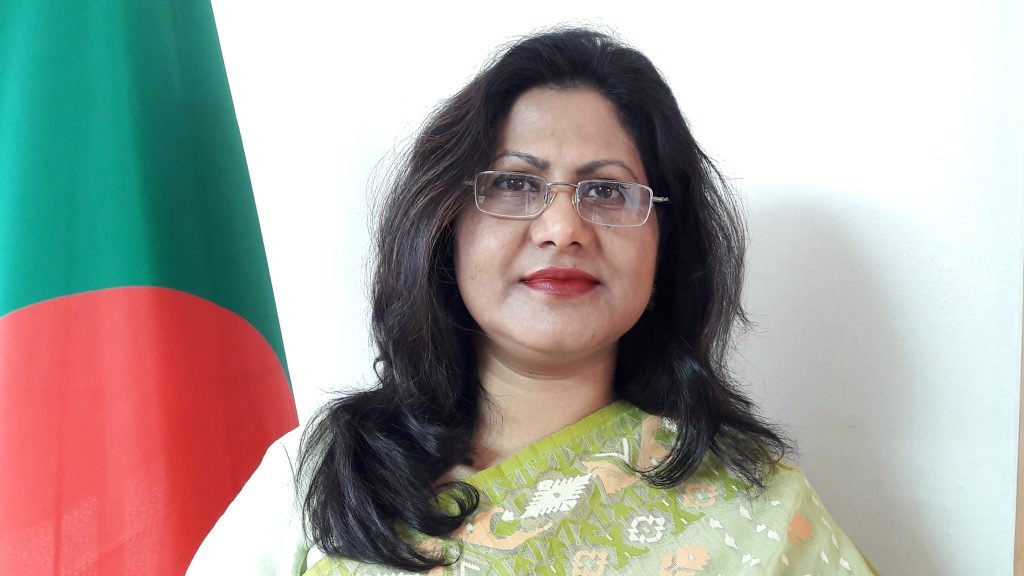 Last year, H.E. Abida Islam was appointed as the Ambassador of Bangladesh to the Republic of Korea. Before arriving on the Korean peninsula, she served as the Director General of the Bangladeshi Ministry of Foreign Affairs. Asia Society Korea wanted to welcome H.E. Abida Islam to South Korea by catching up with her to ask a few questions.

1. As a foreigner, what has been the most interesting or intriguing aspect of Korean culture that you have noticed so far?

Well, I found a lot of aspects of Korean culture fascinating during my stay in Korea, which is a little over six months. Before coming here, I knew that only in four decades, South Korea has experienced incredible economic growth and has become the 11th economy in the world and the 4th largest economy in Asia. Such a transformation could only be possible due to the hard work, commitment and dedication of the Korean people. I found them extremely passionate and committed towards work and also experienced the excellent working environment here. Everything is meticulously planned, coordinated and completed well ahead of time. I also admire their politeness and punctuality. Despite being a progressive society, South Korea maintains its native ethos, which is a wonderful blend of tradition with modernization.
In terms of cuisine, rice is the staple food in both of our countries and I find lots of similarities in rice-related cuisines. I am a fan of South Korean Bibimbap. Anyone who has never tried Korean dishes before will certainly like this dish.
Surprisingly, there are some words meanings of which are exactly the same in Bangla as well as English language. Such as the word “gang”, means river; “Abbuji” is father and “ammuji” is mother both in Bangla and Korean language. Also, we call rice as “chaal” in our language whereas it is “ssal” in Korean and the sound is almost the same.  People having knowledge about both the languages, may find such common words in both the languages.

2. Bangladesh and Korea are far apart, not only geographically, but also culturally. While these two countries contrast in many areas, is there anything in common that you find interesting?

There are many commonalities between Bangladesh and South Korea despite being geographically at a distance. People of both the countries deeply value their traditional practices and perform those with due diligence. For example, the traditional New Year celebration is one of the biggest festivals in our respective countries. Bangla New Year, Pohela Boishakh,is  a secular festival in Bangladesh. It is celebrated by the people from all corners irrespective of class, creed or religion with traditional flair and ambiance. During this holiday, we try to spend quality time with our families and dear ones. Similarly, I hear Chuseok is one of the biggest festivals in Korea, where people return to their ancestral homes to meet with their near and dear ones.
Respect for the elders is another striking similarity that I can mention. Bangladeshis also value our kinship and family ties. Like Korea, we have many customs and rituals to show respect for the elderly. We also give immense importance to family bonding and seriously monitor the progress of our children in education.
In the Bengali language, we have different layers of salutation based on whom you talk to, like the one you have in the Korean language. I can cite many more similarities like these. For example, Korean Movement for Independence is on 1st March and we celebrate our day Independence and National Day on 26th March every year. People of Bangladesh and South Korea both had to make supreme sacrifice to uphold the dignity of their respective Mother languages. For Bangladesh, it is on 21st February 1952 (recognized by the UNESCO as the International Mother Language Day in 1999) when it was a part of Pakistan and for South Korea during its occupation days. I understand that 15th August is a national day for both of our countries. It is the National Liberation Day in South Korea. In Bangladesh it is observed as the National Mourning Day commemorating the killing of our Father of the Nation, Bangabandhu Sheikh Mujibur Rahman in 1975.

3. Most people in Korea have not had the opportunity to visit or learn a great deal about Bangladesh. What are some aspects of your country that you hope to promote here in Korea?

In international media, Bangladesh is mostly portrayed as a climate vulnerable country. At present, the international community is acclaiming Bangladesh for its humanitarian act in hosting about one million Rohingya refugees despite being an overpopulated country with limited resources. I am proud to say that Bangladesh maintains an impressive socio-economic growth against such so many odds. Bangladesh is making contribution in global peace by sending its military and civil officers to the UN Peace-Keeping operations. As one of the most climate vulnerable country, Bangladesh is active in all climate change related forums and over the past three decades it has undertaken a series of initiatives for mitigation and adaptation to address the adverse impact of climate change. Our women empowerment is remarkable. Women not only have leadership role in politics, but there are increased participation in women in private and public sectors, defence service ( army, navy, air force), judiciary, police, sports and all other professions.
I would like to promote our rich history and cultural heritage amongst the Korean people by encouraging them to actively participate in our different events. I believe it would further increase people to people contact and form a positive perception about Bangladesh. Since the last year, we are  celebrating our new year (14th April 2018) in the open space of Itaewon area to display our cultural diversity through live music and dances, cuisines and costumes and thus inspire the Korean people to participate in the event.
With the UNESCO Commission for Korea, we observed our Martyrs Day and International Mother Language Day with due solemnity on 21 February 2018 in presence of number of Korean guests. Two Korean Professors also spoke at that event on the significance of the Day. 25th March 2018 is the Genocide Day of Bangladesh and we observed the event at a reputed university in Korea with the active participation of the Korean intellectuals. Our participation in the 33rd Korea World Travel Fair (KOTFA)-2018 has given the opportunity to exhibit our cultural diversity and attractive touristic places to the Korean visitors. We are also looking forward to our 3rd Bangladesh Film Festival from 20-22 July 2018 that will represent the culture, art and contemporary life of Bangladesh to the Korean viewers.
You would be happy to know that there are over 500 companies working in Bangladesh. The increasing number of Korean community there is already promoting Korean culture and cuisine in Bangladesh. I believe, with our initiatives, we will also be able to showcase Bangladeshi culture and tradition to the people of this friendly country.

4. Similarly, are there any features of Korean society that you hope to recommend to the people back in Bangladesh?

Bangladeshi people are also hardworking and honest, but we could learn from the Koreans with regards to the timekeeping and comprehensiveness - the core components of the rapid development of the Korean nation.

5. Finally, what are your expectations for future Bangladesh-South Korean relations with regards to politics, economics, and culture?

Since the establishment of our diplomatic relationship in 1973, we have enjoyed an excellent bilateral relationship with South Korea in political, technological, economic, cultural and human development fronts.  South Korea is a great friend of Bangladesh. We deeply value this partnership as we speak the same language of democracy, share similar social values and have the common aspiration for socio-economic development. I believe there is an immense scope to further strengthening our bilateral relationship.
On the political front, we maintain a cooperative relationship and support each other in times of need, in different international fora. Since 2010, there is no high level visit to Bangladesh.  I believe a reciprocal high-level visit would create a momentum and further boost up our bilateral relationship. Bangladesh deeply appreciates the political support of South Korea during the 3rd Committee resolution in the 72nd UNGA in November 2017 which included human rights in Myanmar. At the 27th Special Session of the Human Rights Council in December 2017 on the situation of the minority Rohingya Muslim population and other minorities in the Rakhine State of Myanmar. We are also thankful to the Korean Government for its humanitarian assistance to the Rohingya people and hope that this support will continue in the coming days.
With regards to the cultural cooperation, there are occasional exchanges of cultural troupes between the two countries. But both the countries could work closely to increase the frequency of these visits. Notable, the Hallyu or the Korean wave has already reached to the Bangladeshi people. The K-pop, K-drama, and K-food culture have made its mark among the young generation in Bangladesh and we may effectively use this opportunity to increase the people-to-people contact.
In the area of developing the Human Resources, the EDCF (Economic Development Cooperation Fund) and KOICA (Korea International Cooperation Agency) are actively supporting us and we are trying for new areas of cooperation with these two institutions.
In the economic sector, South Korea is an important development partner, one of the largest sources of Foreign Direct Investment and also an attractive destination for our workers. It is our 3rd source of import and we are thankful to the Korean Government for according duty-free and quota-free access to our nearly 500 products.  Our economy is becoming intensely engaged with the economy of this country as our bilateral trade is increasing, but gradually.
There are so many potential areas in Bangladesh, which are yet to be explored by the Korean businessmen and investors.
In May 2018, after organizing an investment seminar in Seoul, we are receiving encouraging responses from the Korean Business houses and the potential investors. I laud the supports that we receive from the Korean Chambers of Commerce and Industry (KCCI), Korea Importers Association (KOIMA), Korea International Trade Association (KITA) and other trade bodies. We are expecting a visit from the South Korean trade delegation to Bangladesh soon. After participating in the Import Goods Fair (IGF)-2018, we noticed the huge interest and demand for our Leather, Jute and Ceramic products in this country.  I hope our newly formed Trade Promotion Committee (TPC) with KOIMA would be helpful in this regard. I hope Bangladesh Economic Zones Authority (BEZA) and SME Foundation of Bangladesh will work in partnership with their counterparts here. I believe all these initiatives will further enhance our bilateral trade and commercial relationship in the coming days.