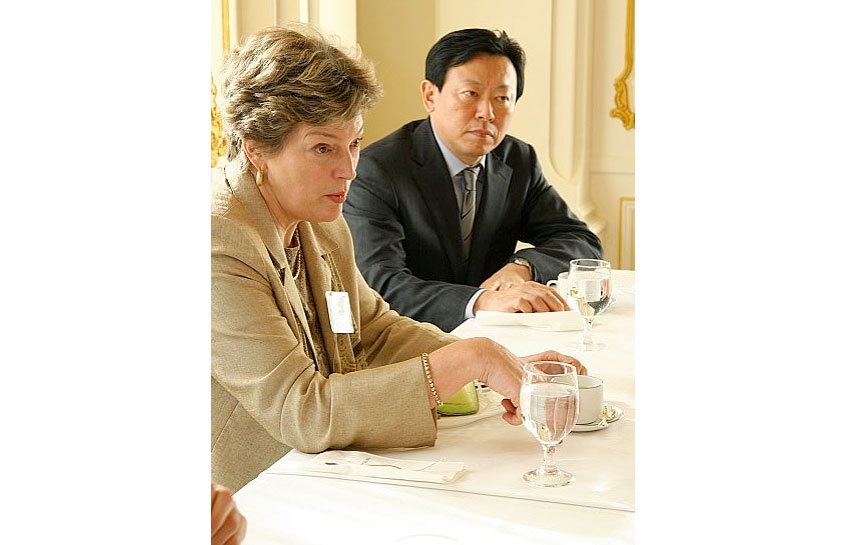 SEOUL, December 23, 2008 - The Korea Center ended 2008 with a holiday luncheon on December 23 at the Lotte Hotel Seoul’s Crystal Ballroom, attended by a cross-section of national and international figures in the public and private sectors. The guest speaker was Kathleen Stephens, the US Ambassador to Seoul. In a talk entitled “Hard Power, Soft Power: The Future of the US-ROK Relations,” Stephens shared her thoughts on the Northeast Asian region, specifically, the Korean peninsula and the ongoing, invaluable relationship that exits in between South Korea and the United States. In addition, Stephens shared her memories of Korea as a young Peace Corps volunteer from 1975 to 1977, and as a Foreign Service Officer serving in Korea as Chief of the Political Section in Seoul from 1984 to 1987, and as Principal Officer of the US Consulate in Pusan from 1987 to 1989.

Stephens stressed the importance of Korea and the US working together even closer as each nation goes through its respective challenges and changes in the new millennium. She also commented on the importance of the Asia Society in Korea and its important mission of connecting Korea and the Asia-Pacific with the United States through art, culture, and media programs. Stephens' presentation was followed by a brief Q & A session from the audience.

The luncheon also featured a children’s art exhibition by Da Vinci Bridge Channel Inc., and an art award presentation afterwards, which was well-received by the Center's audience.