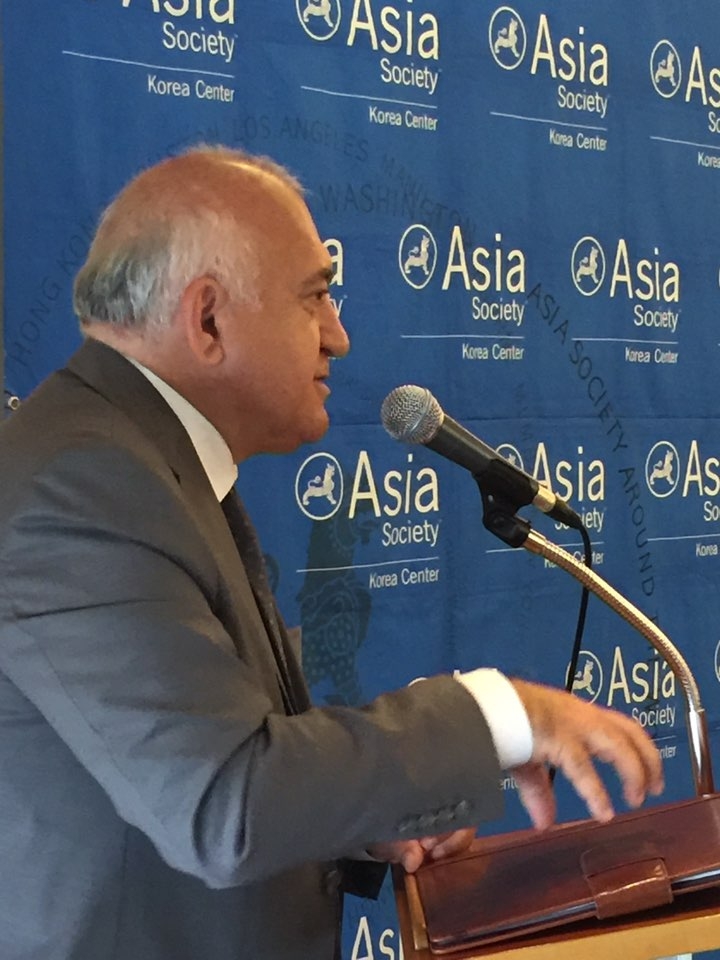 Tuesday, May 17, 2016 - With terrorism a modern day global threat, and Turkey at the epicenter of the issue, the Asia Society Korea Center was pleased to welcome H.E. Arslan Hakan Okçal, Ambassador of the Embassy of the Republic of Turkey, to speak about “Global Terror, Common Challenges and Turkey’s Contribution to Global Peace and Security” at its May 2016 Monthly Luncheon. Having been in the Republic of Korea since January 2014, and having previously worked as Deputy Director for Terrorism in Ankara, the Ambassador was able to deliver a well-balanced and informative lecture based on his experiences around the world, which include working in Libya, Macedonia and Greece. The talk focused on Turkey’s history with terrorism over the past 40 years before looking at the more recent Jihadi threat stemming from the Middle East. His Excellency was keen to stress that although we are living at a crucial time in the world, there is ample reason for hope moving into the future.

Ambassador Arslan Hakan Okçal started his talk with a quote from Charles Dickens’ A Tale of Two Cities by saying “It was the best of times, it was the worst of times. We are living in the winter of despair and the spring of hope”. He was referring to the fact that although we do face a real threat from terrorism, the world is also seeing a decrease in poverty, increased literacy rates, a technology revolution, longer life expectancy and more and more democracy. That being said, the challenges and threats that we encounter can be viewed with different perceptions based on where you live and your point of view. For example, living in South Korea the biggest threat comes from North Korea and their missile and nuclear issues, but if you live in Turkey the biggest problem you face is from terrorism. As Turkey neighbors both Syria and Iraq, it is engulfed by both the migrant crisis and the threat from ISIS.

While the Jihadi threat is admittedly huge, Ambassador Arslan Hakan Okçal also spoke about the threat of terror from the Kurdistan Workers' Party (PKK) and the Revolutionary People's Liberation Party. In fact, Turkey first experienced terror threats from Armenian militants in the 1970’s which cumulated in the 1983 bombing of a Turkish Airlines check-in counter at Orly Airport in Paris which killed eight people and injured 55. In 2016, the biggest threat to world peace comes from ISIS and Al Qaeda, two groups that formed from the instabilities in Iraq and Afghanistan. The optimism following the Arab Spring was quickly eroded away with many false expectations for democracy in the region. The Ambassador believes that the solutions to the problem must come from the bottom and that Arab counties should focus on education, good governance and democracy, while the West has a responsibility not to meddle in countries and leave behind a mess.